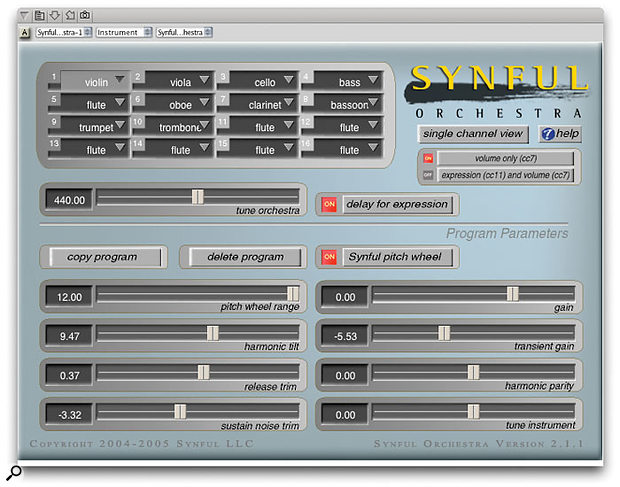 The Synful orchestra, running as an Audio Unit plug-in within DP 4.52. Like it or hate it, you're probably looking at the future of orchestral emulations.

We investigate a newcomer to the orchestral sample-player scene and provide a quick round-up of the 'powered processing' options available to DP users.

Digital Performer users are well served by sample-based orchestral Virtual Instruments — highly developed packages such as the snappily titled East West Quantum Leap Symphony Orchestra and Garritan's Personal Orchestra exist alongside more generic solutions such as NI's Kontakt 2 (which is bundled with a good bit of the excellent Vienna Symphonic Library) and MOTU's own Mach Five. Just recently, though, the choice expanded still further, with the arrival of Synful in Audio Unit format.

Synful takes a different approach to most other orchestral simulations, in that it does away with the multi-Gigabyte library of individual samples and instead occupies a mere 75MB or so. Instead, it apparently uses a sophisticated additive synthesis system combined with an 'interpretive' element that looks at ways of making your orchestral parts sound more natural and idiomatic. It seems that those who work in the orchestral scoring field either love or hate Synful, but it certainly has some impressive aspects. It might also be valuable when used in addition to a conventional orchestral sound library, adding a much-needed sense of realism to many phrases.

For DP users, the great news is that Synful works fine as an Audio Unit plug-in, and its developers were quick to fix some incompatibilities with DP 's AU inspection process. That bodes well for the future. Using Synful in DP is also extremely easy — you set up your instruments in its main window slots and then drive them from individual MIDI tracks. You can also have multiple Synful instances if you need to treat certain instrumental groupings with different plug-in effects, for example. Synful costs around £280 (depending on exchange rate), and is available from www.synful.com.

Just as I was finishing off this edition of Performer Notes, MOTU made available DP 4.6, which includes all the enhancements to previous versions that were shown at this year's winter NAMM show and at Sounds Expo in London. The major new feature is undoubtedly pitch automation, which incorporates Autotune-like pitch manipulation capabilities into the Sequence Editor. But there's also V-Racks (a special kind of project chunk that can host virtual instruments and other plug-ins so they're accessible from all other chunks), a new Pattern Gate plug-in, a better metronome and countless other improvements. See next month's Performer workshop article for more on pitch automation, and rest assured that there will be plenty about the other new goodies in SOS over the coming months.

Universal Audio recently released version 3.9 of their UAD1 software, which is now compatible with Mac OS 10.4. The UAD1, as you may already know, is a PCI card that carries out audio processing without taxing your computer's processor, but only when you use its bundled plug-ins. These are in the Audio Unit format if you're using OS X, although OS 9 users are still supported by UAD1 MAS plug-ins.

Aside from offering obvious processor-use benefits, UAD1 plug-ins are of very high quality, offering emulations of legendary studio gear such as the 1176, LA-2A and Fairchild compressors, Pultec EQ and EMT plate reverb. Prices range from approximately £300 for the 'Project Pak', which comes with a cut-down set of plug-ins, to £900 for the 'Ultra Pak', which comes with the kitchen sink.

The UAD1 isn't the only powered processing card on the market. Its main rival is TC Electronic's Powercore system, which ships as either a PCI card or an external Firewire unit. Again, Powercore processors appear in DP as Audio Unit plug-ins, and while there isn't the same emphasis on emulation of analogue gear as with the UAD1, Powercore plug-ins arguably span a broader range of applications. As well as compressors and EQ (including Sony's Oxford EQ as an extra-cost option) there are de-noising and restoration tools, synths (including the Access Virus and Novation V-Station), amp modelling and mastering processors. A mere £279 gets you the Powercore Element PCI card with a useful selection of bundled plug-ins and the option to purchase the more heavyweight ones, while £800-900 buys you either the rackmount Powercore Firewire or the Powercore PCI MkII card, both of which deliver the greatest performance currently offered by the Powercore system. For details visit www.tcelectronic.com

Finally, the most recent newcomers to the DP-compatible powered-processing card ranks are Waves' Audio Processing Accelerators (APAs). These external boxes use high-speed Ethernet to connect to your Mac and allow you to run most of Waves' most demanding plug-ins (the IR convolution reverbs, the Linear Phase processors and the Renaissance Reverberator and Renaissance Channel).

If you're in love with your Waves processors, the APA processors might be the way to go, although their stated performance capabilities don't seem terribly impressive compared to their cost. The most powerful, mobile APA44M has a list price of $2,400, while the rackmount APA32, which is apparently 30 percent less powerful, comes in at $1600. The implication, too, is that the APA32 may be saddled with fan noise, as Waves state it's 'designed for machine rooms'. More information from www.waves.com.