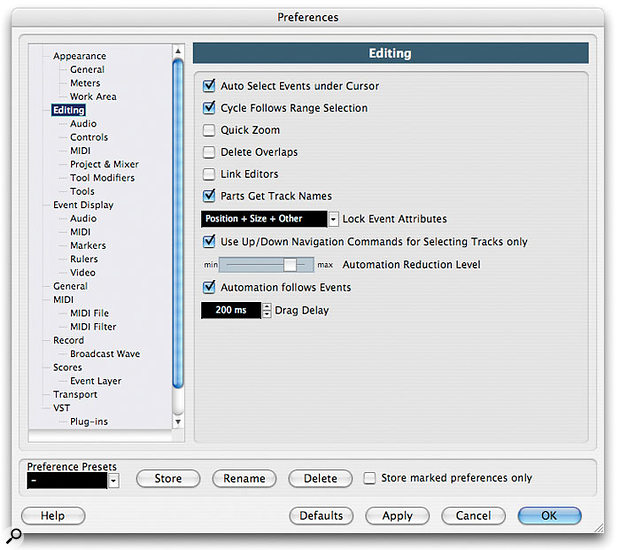 Cubase SX/SL's newly reorganised Preferences window offers a vast number of options that are easily missed but could make your Cubase life much easier, such as the Editing page's options, shown here, described in the main text.

Preferences could be the key to more predictable behaviour and smoother operation — for Cubase, at any rate!

Last month's Cubase Notes seemed to cause a bit of a stir on Steinberg's Cubase.net forum — how dare SOS be allowed to 'review' Cubase SX 3.1 before it's available to the users?! After reading the thread, I thought it would be good to mention that since Sound On Sound expanded its sequencer coverage to include monthly workshops alongside the already regular Notes columns, the idea of Cubase Notes is presently to provide news, tips and items of general interest to Cubase users. It was in this spirit, therefore, that I wrote about the forthcoming 3.1 update, as an expanded news item with some added opinion, to give Cubase users an idea of what they have to look forward to after having worked with the beta. Coverage of updates in Cubase Notes does not constitute an official SOS review!

Anyway, getting back to the concept of tips, I thought I'd share a few preferences this month — literally. I was sitting down with a composer friend recently and somehow we got onto the subject of Cubase. He was commenting on how great it would be if you could use MIDI Controllers to control basic automation such as volume on MIDI tracks, and I told him about a preference added in version 3 that would allow him to do just that. So this month I want to share a few Preferences you might not have considered, that could really be helpful. (I should mention that the Preferences window has been tidied up and reorganised a little in Cubase SX/SL 3.1, and the references in this article refer to this new version rather than earlier releases.)

Taking the above example, should you want to use MIDI Controllers to write automation for MIDI tracks (rather than recording the same automation as MIDI data in a Part), simply enable 'MIDI Controller Input to Automation Tracks' in the MIDI page. Now, for example, when you have a MIDI track selected and you generate Controller 7 data, the volume fader on the corresponding MIDI channel will move.

A neat preference that I know quite a few people campaigned for is 'Parts Get Track Names' in the Editing page. Normally, with this option disabled, a Part will keep its original name when moved from one track to another. When the option is enabled, a Part will automatically be renamed to take on the name of the track to which it's being moved or copied. This is useful when you consider that a Part always takes on the name of the track where it was first created, so if you like all of the Parts on your flute track to be called 'flute', even if they came from the violin track original, this is a preference for you.

The Editing page actually has many other useful Preferences too. There's the well-known Link Editors option, which means that an open editor window will always display the contents of the selected parts in the Project window. There's also 'Auto Select Events under Cursor', which, quite literally, automatically selects Events and Parts that fall within the current position of the Project cursor on the selected track. 'Cycle Follows Range Selection' initiates a very Pro Tools-like behaviour where the position of the left and right locators can be set automatically to the current selection made with the Range Selection tool, which is rather handy.

Paying homage to the great Dennis Norden, our final selection of Preferences is labelled 'Ah, so that's why!' For example, have you ever noticed the following situation: say you have five tracks and the third track is selected, but the last Object you selected on the Project window was in fact a Part on the first track. Pressing the 'down' cursor key selects the second track and any Object on the second track, instead of simply selecting the fourth track, as you expected. Fear not. Enabling the 'Use Up/Down Navigation Commands for Selecting Tracks only' option in the Editing page will give you exactly the behaviour you expect from now on.

A common question from new users is 'why does the horizontal zoom factor change when I drag the Project cursor along the ruler?' The reason is a Preference called 'Zoom while Locating in Time Scale,' which makes dragging vertically up or down from within the ruler zoom the Event display in and out respectively. Dragging horizontally within the ruler does indeed set the time location of the Project cursor, as you'd expect, but since the ruler is rather small it's easy to accidentally drag above or below it and change the horizontal zoom factor by mistake.

Finally, another version 3-related issue. You'll notice that when you move the mouse into a Controller lane in the Key editor, the mouse always defaults to the Pen tool, rather than the Selection tool as before. Some users find this handy, and you can temporarily make a selection as you would normally with the Selection tool instead by holding down Control/Apple. However, to change this behaviour back to the old way (ie. you get a Selection tool and hold down a modifier for the Pen tool), simply disable 'Controller Lane Editing: Select Tool defaults to Pen' in the Editing — MIDI page.

Join us again for more Preferences fun in another Cubase Notes column soon, and drop us a line if you have anything personal you'd like to share about your Cubase habits...