Live offers plenty of tools to perk up insipid rhythms.

A good groove is hard to find, and once you’ve found one it may still need a little help, so a shove in the right direction is always helpful. This month we’ll look at two ways to generate drum parts using automated repetition and Euclidean rhythms. Two things to keep in mind throughout: these techniques are often best used to create ancillary percussion parts to complement existing grooves, and you can use Live’s Groove Pool to align them with your underlying groove.

The quickest way to turn a single drum hit into a pattern is to push it through a MIDI delay or arpeggiator effect. Live’s Arpeggiator MIDI effect will do nicely, but for MIDI delays you’ll need to turn to Max For Live, and fortunately, Live’s Max For Live library is loaded with them. (You can also use audio delay effects such as Live’s Simple Delay to get similar but less editable results.) Let’s start with Arpeggiator. 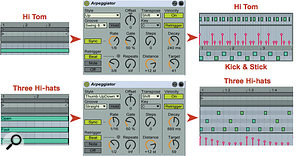 1: Live’s Arpeggiator provides a quick way to create interesting top patterns for percussion over your drum grooves. To add variety, change settings on the fly or capture Arpeggiator’s output and edit the clips.Screen 1 shows two Arpeggiator setups that illustrate how you can go beyond simple repeated hits. The first arpeggiates a single note to generate a high-tom part meant to accompany a basic kick and sidestick pattern. Arpeggiator generates the high-tom part in eighth-note swing time (alternate eighth notes delayed to the next triplet). That pattern is set to retrigger every three eighth notes, which matters only because of Arpeggiator’s Velocity settings, which, combined with retriggering, create an accent on every third high-tom hit.

2: The Max for Live Note Echo is a MIDI delay modelled on Live’s Simple Delay. Mapping its settings to knobs and notes as shown lets you make real-time changes in the delay pattern.The second Arpeggiator example in screen 1 generates a closed, open and foot hi-hat pattern, and again, the Velocity section is used to add contour. Four Arpeggiator patterns — Pinky Up, Pinky UpDown, Thumb Up and Thumb UpDown (used here) — are especially well suited for percussion. Keep in mind that you can automate or manually change most of Arpeggiator’s settings on the fly to add variety to your patterns.

3: The 16-step Euclidean rhythms on the left were derived using the stretch-and-quantise process shown in the centre. Rotate these to produce all variations of each pattern as indicated on the right.Instead of repeating a pattern while notes are held, a MIDI delay line lets you trigger one-shot patterns or, by adding some feedback, repeating patterns that fade out over time. You’ll find a number of different MIDI delays in Live’s Max For Live library, and I’ve chosen Note Echo, modelled on Live’s Simple Delay, for the example shown in screen 2. Note Echo offers only one delay channel, but you can easily group two or more of them in parallel in a MIDI Effects rack for more complex rhythms. Note Echo has two controls not found in Simple Delay: Pitch lets you create an incremental offset for each successive echo, and Feed Delay adds Velocity scaling to successive echoes. I’ve enclosed Note Echo in a MIDI Effects rack to allow me to map MIDI notes (C through G) to select the delay time. Keep in mind that the delay times are multiples of a 16th-note, so for triplet delays you need to use the offset control — an offset of 33.3 percent results in triplets of the selected note division.

One way to think of a percussion pattern is as an arrangement of notes (hits) over a given number of steps. A common goal is to have the notes distributed as evenly as possible (for instance, X••X••X• is more even than XXX•••••). For any number of notes and steps, there is one most even distribution of notes among those steps. One of several ways to calculate that distribution is with an algorithm developed 2300 years ago by the Greek mathematician Euclid. For the gory details, check out the ‘Euclid’s Revenge’ box. Euclidean rhythms are common to virtually all music cultures but are most used in African and Latin American music.

Live makes it easy to distribute notes evenly over any step range: create the desired number of hits on adjacent steps, enclose them in a loop and then click-drag the loop’s MIDI Stretch Marker to the end of the desired range (see screen 3). The notes will now be evenly spaced, but they will be stretched and will not usually be aligned to the step grid. Moving each note to the closest gridline (quantising) gives you the most even step-aligned arrangement (the Euclidean rhythm). Be sure to resize the notes before you quantise; otherwise some could overlap and thereby delete others.

An easy way to generate variations on a Euclidean rhythm is to rotate it — each rotation shares the most even distribution. You can rotate a looping Live clip simply by moving the loop’s Start Marker. A visually more revealing method is to duplicate the clip (use the Dupl.Loop button), return the loop brace to its original length, move it to enclose the desired rotation and then crop the clip to the loop brace.

There are several Max MIDI Effect Live devices that purport to generate Euclidean rhythms, but all the ones I’ve found produce incorrect results some of the time. There are blog comments indicating that correct versions are in the works, so keep an eye on www.maxforlive.com. In the meantime, at www.ageofthewheel.com you can download an archive of Live clips and MIDI files called ‘TonysPulses’ that includes all Euclidean rhythms of up to 32 steps.

If you’re a Reason user, another alternative is the Rack Extension ‘Euclidean Rhythm Generator’ from Robotic Bean (www.roboticbean.com/creative/products/euclid). In addition to getting the calculation right, it offers rotation, variable step size, shuffle, individual step mutes and control of gate width and velocity. You’ll find the details on sending MIDI to Live from Reason devices in the November 2014 Live column.

Love it or hate it, maths plays a big role in music, especially with rhythm. Euclid’s algorithm for determining the biggest number that divides two numbers (also called their greatest common divisor or GCD) turns out to be one method for most evenly distributing hits and rests in a rhythm pattern. The go-to source for this algorithmic approach is a paper by Godfried Toussaint of McGill University (cgm.cs.mcgill.ca/~godfried/publications/banff.pdf).

Here is an algorithm (not precisely Euclid’s) that Toussaint attributes to E Bjorklund. This often produces a different rotation of the Euclidean rhythm from the stretch-and-quantise method of screen 3. I’ll illustrate with the calculation for seven hits and nine rests (16 steps) where ‘X’ represents a hit and ‘•’ represents a rest. In the examples, only the Xs and dots represent steps; the spaces between them are for visual clarity.

(If you have too few rests, distribute as many as you have.)