With Logic Pro X, there’s no excuse for leaving your music unfinished!

How many unfinished tracks are on your hard drive? Granted, not every track is meant to be completed, but in anyone’s list of projects there are likely a handful of keepers that are nearly ready for release or the next sync opportunity. Completing a track can be as simple as applying a few modern arranging touch–ups and orchestration techniques to create that authentic sense of a track building and resolving. They are the je ne sais quoi that makes a track sound finished, and Logic makes it easy to use them.

Sometimes, the build between verses or choruses is achieved through layering: by doubling existing synth parts with the right instrumentation, for example, rather than busying up the track with more parts. Try adding subtle variations to the sound in the second verse or chorus to add subliminal interest to a track or song.

Track Stacks in Logic Pro X allow you to save and load layered sounds in the Sound Library that combine multiple soft synths, adding a richness to the production. If you still double your synth tracks manually for every project, by creating new software instrument tracks and copying the original region over, consider saving the multiple-synth combo as a custom patch for future use. See the April 2014 technique column for more about Track Stacks (http://sosm.ag/apr14logic).

Tracks can sometimes seem incomplete because the A and the B sections feel like two separate pieces of music with no glue to create the transition. An easy fix can start with dropping in a sampled drum fill. If you’re not a great drum fill programmer, dig through any of the ever–growing catalogues of sample libraries (a few recent favourites are Beatport Sounds, Sounds/To/Sample and Loopmasters) and collect a few solid sampled ones. You may be surprised how well a sampled fill can work, even if it has to be time–stretched to the correct tempo. With the slightest EQ, the library fill blends right in to your existing drum track. Try slicing off and using just the last beat or two beats so the fill doesn’t get repetitive, then strategically drop the complete one–bar fill in once or twice. This subtle movement can give even the most electronic track a touch of natural, live-drumming build-up. 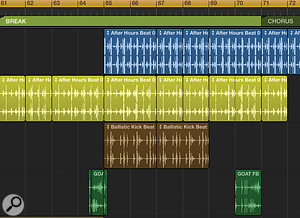 The Repeat Section tool in the Toolbar is handy. Highlight the desired area in the bar ruler as if preparing to create a cycle area, then select the Repeat Section tool. With the copied section of the verse or chorus, strip out the vocals and leads then have a bit of fun introducing a subtle line of interest in the newly copied section. What sort of line? Well, if you have an unused vocal riff, try layering it with effects, chopping it up and repeating one syllable of it. Suddenly an out–take becomes the coolest section of the track. Alternatively, create a pulsing effect in the breakdown with Logic’s Tremolo on the Slow Panning preset, to move something back and forth within the stereo field in time with your track. There’s also a cool third–party plug–in called VolumeShaper 3 from Cableguys that will instantly add that EDM pulsing to your beat.

Add a pulsing effect to your break with the ‘Slow Panning’ setting on Logic’s Tremolo plug–in, or by using VolumeShaper from Cableguys on a breakdown. Another possibility is to strip the track down to the vocals, with maybe one synth or drum line underneath for interest. Add any one of Logic’s built–in effects for a new dimension without playing additional parts. Try the Fuzz–Wah plug–in for warming up almost any sound, even an acoustic piano, so it blends into the track.

Logic has an incredible suite of delay effects, the crown jewel of which may be Delay Designer, with the depth of parameter control and breadth of echo effects it offers. Delay Designer was introduced back in Logic 8, and still holds its own when it comes to offering effective ways to create delay effects. Here’s a quick refresher:

Delay Designer is a multi–tap delay. Up to 26 individual taps — or delay lines — can be fed back into the circuit, and each can be edited to create unusual delay effects. While Delay Designer can be used for basic echo effects, its raison d’être is the sort of evolving, complex pitch-changing rhythms found in the factory preset folders labelled Complex, Filtered and Warped.

Here’s how to tweak them yourself. The central, rectangular blue area in the Delay Designer interface is referred to as the Main display area, and it’s used for editing the tap parameters. This workspace gives you a horizontal timeline. The overview display in the upper right, beneath the View buttons, shows all the taps in the timeline in a miniaturised view. Whichever delay tap is selected, its value is displayed below at the centre of the enlarged circle labelled Tap Delay. Delay Designer gives you a lot of control over the taps!

Sometimes the track just needs to breathe; the finished track is already there, just buried. Remove excess synth parts, guitar riffs, vocals and strip it back to the essence of the groove. Solo different combinations of tracks and you’ll hear the groove is already tight, just stuck underneath too many layers. Maybe just the bass line with one synth, not three, will hold down the groove? If you have trouble letting go, use Logic’s Track Hide feature to mute then hide surplus tracks to keep the project clean.

The Hide Tracks feature is a bit hidden in Pro X, as there’s no Hide button at the top of the track list. Instead, Ctrl–click (or right-click) on a track header and select ‘Hide Track/Show Hidden Track’ from the menu. 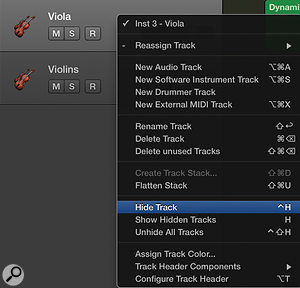 Right–click on the track header to reveal the Hide Track feature.

Stop clogging up your hard drives with unfinished sketches filled with track clutter. When inspiration and focus are low for a new track, go back through your old drives, listen to untitled and forgotten tracks with fresh ears and strip out the insignificant parts. It’s likely there will be beats you wrote off that are actually really great when you listen again with fresh ears. The take–no–prisoners producer leaves no good idea unfinished!