Discover how to make the most of Live's Effect Racks.

Here you can see each section of the Rack: Macro controls on the left, chain list in the middle and plug‑ins contained within the currently highlighted chain on the right.

Simon Price covered the essentials of Ableton Live's Instrument and Effect Racks on these very pages way back in January 2007, a few months after Live 6 was first unleashed upon the world. And while we've seen two more incarnations of Ableton's flagship software since then, it's still well worth your while checking out Simon's advice on key mapping and effects switching, which you can find on the SOS web site: /sos/jan07/articles/livetech_0107.htm.

However, I think it's high time that we revisited what I consider to be the most powerful of these units — the mighty Effect Rack — which can be used to radically alter your sounds with just a few simple tricks. I'm therefore going to brush over the basics of Live's Effect Rack, for those who have yet to become acquainted with the device, and then show you how to assign Macro knobs for more hands‑on control of your effects, before going on to explore the Effect Rack's more creative side, with a neat technique for generating multi‑band effects. 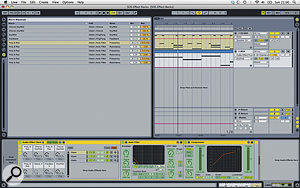 With Map Mode engaged, all the mapped parameters are shown in the window to the left, where you can set the maximum and minimum values for each parameter.

Essentially, an Effect Rack is a device for applying one or more effect chains to any given MIDI or audio channel — a chain being your standard 'one effect after another' scenario. The real beauty of the Effect Rack, however, is that these chains are applied in parallel, meaning that you can go buck-wild with layer upon layer of different effects, some in series (in a single chain) and some in parallel (in a multi‑chain setup). What's more, each chain can be panned separately, to create various spatial effects, and the chain's volume sliders can be employed to achieve the perfect blend. For instance, you might want to mix a highly distorted signal at a much lower level than a totally unprocessed version, to gently highlight the upper harmonic content of a given signal.

Of course, there are plenty of presets to try out for processing the most common instruments in any set. In the screen below, for example, I've used a basic Drum Kit Squasher preset to fatten up some 808 sounds. However, the best way is to start with a blank slate, so load up an Effect Rack on either an audio or MIDI track and make sure the three buttons on the left‑hand side are highlighted to show the Macro section, chain list and effects window respectively. To set up a chain, simply drop an effects plug‑in onto the middle section. From there, you can add more effects to this chain by dropping them into the rightmost window. And to start a new chain, drop another effect below the first chain in the middle section. You'll also notice that this section is the place for highlighting each chain and revealing its contents, as well as muting, soloing and adjusting pan/level.

Isolating the lowest frequencies and applying some heavy compression to the synth bass tone.

One of the greatest advantages of using Effect Racks is that you can control several effect parameters in the Rack with a single knob. This is particularly useful when you want to tie two related parameters (such as a filter's cutoff and resonance) to a single knob, for example, or if you want to bring a sudden bout of chaos to your Live sets by increasing the dry/wet controls of many different plug‑ins simultaneously.

To map a control, click the Map Mode button above the Macro controls, highlight an effect parameter, then hit the Map button below the desired Macro knob. For assigning multiple parameters to the same Macro knob, simply repeat the process for each new parameter you wish to assign.

Once you've mapped a parameter, it will appear in a window in the top left‑hand side of the screen (see the screen to the left), where you can set its maximum and minimum values (you can also unassign a parameter by highlighting it in the window and hitting Delete). Note that this mapping technique works with the majority of third‑party plug‑ins, too, so there's no need to work exclusively with Live's built‑in devices. Furthermore, tying these Macro knobs to physical controls on a MIDI keyboard works wonders for experimenting with different effects and finding new sounds. Follow the standard MIDI mapping process to do this.

Now for my favourite trick. It's mainly for bass tones, but also serves as a good example of the flexibility of Effects Racks. The basic idea is to use an Effect Rack to split an audio signal into distinct frequency bands that can then be manipulated separately. One of the easiest setups, and the one that I tend to use most often, is made up of three separate chains, each of which contains an Auto Filter plug‑in. To get up and running, I set the first Auto Filter to low‑pass mode with a frequency cutoff around 100Hz, the second to band‑pass, with the cutoff around 600Hz and a Q value of 0.80, and the third to high‑pass, with the cutoff at 5kHz. These values are set so that the resulting signal is clearly separated into three distinct bands rather than providing completely transparent processing. This provides me with a rather crude but effective multi‑band setup, isolating parts of the bass, middle and treble of any given signal.

Of course, you may just want a very basic way of splitting a sound into bass and treble. In this case, use two chains and set their respective Auto Filters to low‑pass and high‑pass, with their cutoff values set fairly close together. Remember that you can always switch off the Effect Rack occasionally to better judge how the filters are affecting the signal if you want to process it more transparently. What's more, you should experiment with the numbers of bands and their cutoff points to get the right setup.

The filter's LFO is used to shift the cutoff frequency before the signal is sent to a Ping Pong Delay and a Chorus effect.So what's the point of doing all this? Well, now each part of the frequency spectrum can be manipulated separately, all depending on how many bands you have chosen to employ and where you've set the cutoff points, of course. Let's look at an example...

I want to transform a distorted synth bass sound that's currently overpowering my drum track. (I'm using Ableton's Analog synth through a Saturator plug‑in here, but feel free to use whatever gritty synth sound you like when trying it out for yourself.) First of all, to isolate the lowest bass content, I've used the first Auto Filter to low‑pass filter the sound at 80Hz. After the filter, I've dropped in a Compressor plug‑in, which enables me to apply some heavy compression to just this part of the sound (as in the topmost screen above). This significantly boosts the deepest frequencies, which had been largely lost due to the distortion. And of course, there's always the option to apply side‑chain compression to duck these 'sub' frequencies on each and every kick-drum hit, if you find that these elements are clashing.

Now I want to tackle the mid-range. To add a little thickness and width to this fairly narrow band, I've dropped in a Ping Pong Delay after the Auto Filter. This is then followed up with some subtle chorusing. To add further interest, I've shifted the frequency cutoff of the Auto Filter by employing its in‑built LFO to slowly modulate the sound over two bars, as you can see in the middle screen above.

Lastly, I've added some heavier chorusing to the treble layer, as shown in the final screen above. The three chains now combine nicely, with the compressed, mono 'sub' frequencies of the first chain being complemented by the wider, modulated tones of the mid-range and treble chains. Aside from being a more interesting tone overall, the synth bass sound is now far less overbearing, which in turn enables the drums to cut through the mix.

Chorusing is applied to the airier top end of the bass sound and the chain's volume is reduced to help it blend with the other two layers of processing.

From here, it's simply a matter of seeing where your imagination takes you. Using parallel effects chains enables you to try out wild combinations that just wouldn't be possible with the more common method of applying processors serially. In addition, being able to pinpoint certain frequency areas using filters, then effecting them separately, can be extremely creative. Try it on complete drum tracks, for example, so that you can roughly isolate the kick, snare and hi‑hats for individual processing.

Don't forget that you can always set up a chain without any effects on it, too, in order to blend a dry, unprocessed signal with the rest of your effect chains. And, of course, you needn't split the signal into separate bands at all, but simply apply layer upon layer of different chains (and balance them with their individual pan and level controls) until you come up with something complex, innovative and evolving. This would naturally be a good way of spicing up pad sounds, for instance.