Sonar X1 Producer comes with Native Instruments' Guitar Rig 4 LE, which, despite being a lite version, provides very useful amp and effects modules. However, just as you wouldn't just pick a mic at random and point it in the general direction of an amp, amp simulators require some setup and optimisation too. While the following tips relate to GR4 LE because it's part of Sonar X1, many apply to other amp sims, especially the Cakewalk Amp Sim included in X1 Producer and Studio, where the following techniques produce even more dramatic improvements.

One way to sweeten a distorted amp‑simulation sound is to run your projects at an 88.2kHz or 96kHz sample rate. This is not a 'golden ears' thing regarding frequency response; rather, higher sample rates seem to handle the harmonics from high‑gain amp sim settings more elegantly. Try it yourself: run Guitar Rig 4 LE in stand‑alone mode using a high‑gain amp at 44.1kHz, then do the same thing at 96kHz. You'll probably be able to hear a difference.

As it's not always practical to run projects at elevated sample rates, you can enable GR4 LE's internal oversampling by turning on the HI (High Quality) button toward the upper right. This doubles CPU consumption, but it improves tone with most models.

Guitar Rig 4 LE's HI switch helps to improve tone. However, also look at the input meter toward the left: it has gone 'into the red', which is not a good thing.

The Importance Of Gain Staging

There's the potential for two types of distortion within modules like amp and cabinet emulators: the 'good' amp distortion, and the nasty digital distortion that results from not setting levels correctly inside the amp-sim software.

To avoid digital distortion, optimise levels as you work your way from input to output in the following order:

1. Make sure the guitar isn't overloading your audio interface; set the interface preamp gain so that the guitar never goes into the red. Be conservative, as changing pickups or altering your picking style might change levels.

2. Adjust GR4 LE's input level control so that the input levels never trigger the red LEDs towards the right of the input-level meter. If needed, pull down the level slider located inside the meter.

3. Trim levels within the amp simulator itself. Like their real‑world equivalents, amp sims can be high‑gain devices — high enough to overload their headroom internally. The cabinets in GR4 LE include a volume control with Learn function.

The Learn function, included in both individual amps and for the overall output, optimises gain within Guitar Rig.

4. Trim the preset/output level. GR4 LE has a special Preset Volume output module, which also has a Learn function. This matches levels among patches, but also prevents distortion.

Another tweak is removing unnecessary high frequencies. With the ProChannel post‑amp, enable the LPF option and choose the 48dB/octave response. Lower the frequency control until you hear a warmer sound, without buzziness (typically around 8‑12 kHz).

Studio Edition owners can use the Sonitus:fx Equalizer to trim high frequencies. Choose the low‑pass filter option, experiment with reducing the frequency until any high‑frequency buzziness goes away, then adjust the Q control to alter the slope's steepness. Although the roll‑off isn't as sharp as with the ProChannel, you can 'stack' two or more bands to create a sharper response. 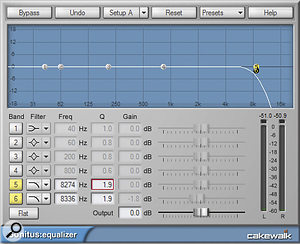 With the Sonitus:fx Equalizer, bands five and six are given identical settings, to create a steeper high‑frequency cutoff.

Similarly, it's sometimes worth trimming the very lowest bass frequencies. Physical cabinets — particularly open‑back cabinets — have a limited low‑frequency response; besides, recording engineers often roll off the bass a bit to give a tighter sound. The ProChannel's dedicated high‑pass filter works similarly to the low‑pass filter, so with the Sonitus:fx Equalizer, choose the high‑pass response from the Filter drop‑down menu. As a guitar's lowest string is just below 100Hz, set the frequency for a sharp low‑frequency roll‑off around 70Hz or so.

Using an EQ to reduce highs before going into the amp sim can also give a sweeter tone, particularly with guitars that have bright pickups. This is the same principle as turning down the tone control prior to feeding distortion: if you send lots of highs into distortion, you're adding distortion to those highs and generating even higher harmonics, which can result in a harsh sound.

All amp sims that I've used exhibit, to some degree, what I call 'the annoying frequency'. This adds a sort of fizzy whistling sound. It may result from pickup characteristics, musical style or playing technique, for example, adding up in the wrong way and, therefore, emphasising a resonance; or it may be something else, like a sound that was actually part of the amp being modelled. This can be an unpredictable problem; one amp might have this 'fizz' only when using a particular virtual mic or cabinet, but the same mic or cabinet on a different amp might sound fine. In any event, it detracts from the amp sound's potential richness.

To tame these frequencies, you'll need a stage or two of parametric EQ, and these should go after the amp sim. So, with Studio, simply insert a Sonitus:fx EQ in the effects bin after the amp sim. With ProChannel, make sure it's in the Post FX Bin position.

Here's the principle of how to find and remove any annoying frequencies:

You may find it easier, especially after you have some experience with this technique, to start off with a notch response (again, use a fairly high Q, and at least ‑12dB of gain). As you adjust the frequency control, at some point the sound will become warmer. Lowering or raising the frequency will no longer notch out the annoying frequency, and you'll lose the warmth.

Sometimes finding and removing a second (or even a third) 'fizz frequency' can further improve the tone. This is a more advanced technique that requires both practice and sharp notches; but when done right, the improvement is definitely noticeable. Generally, the more notches you need to use, the narrower they need to be.

To refine this technique, experiment with the notch bandwidth. You generally want the narrowest notch possible that nonetheless gets rid of the whistle, otherwise you'll diminish the highs.

To tie all this together, let's apply these various techniques to GR4 LE:

ProChannel is in the 'post' position, so it processes GR4 LE. Note the EQ settings and the resulting graph.

After these high- and low‑frequency trims, mid-range notches and choice of either a higher sampling rate or your amp simulator's oversampling options, your sound should be smoother, creamier and more pleasing. You might also want to tweak the Jump amp itself: move the A/B slider to taste (try halfway), and add some Air for ambience. Done!