Is the latest iMac 'Ultimate' the one to unseat the Mac Pro as the obvious choice for the studio? 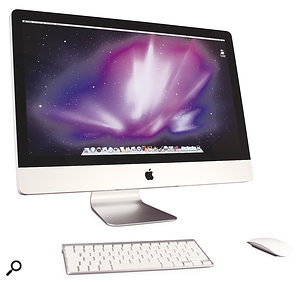 With due diligence, Apple have once again updated the iMac range. The performance gauntlet was well and truly slapped on the table by the latest MacBook Pro (see Apple Notes June 2011) with second-generation Intel i5 and i7 'Sandy Bridge' processors and Thunderbolt I/O throughout the range. The MacBook Pro in that test trounced the iMac it was up against, so it's time to give the MBP's desktop sibling a chance to fight back. Until now, there have been good reasons for thinking that perhaps the iMac is not a suitable choice for your studio, and that the only model to be considered is the Mac Pro (PCI cards and hard-drive bays being two such reasons). But the new iMac, with the addition of Thunderbolt I/O, has gained a level of adaptability that puts it right in the frame — and the top-of-the-range iMac model costs quite a bit less than an entry‑level Mac Pro. 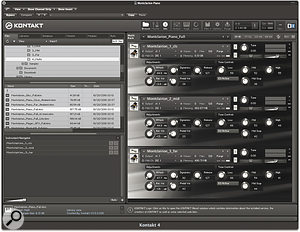 Tonehammer's Montclarion Piano in Native Instruments' Kontakt. This instrument must have been designed on a 27-inch screen!

The new iMac range consists, as before, of four models, each of which can be customised with faster processors, more RAM, and so on. There are two 21.5-inch models sporting 2.5GHz and 2.7GHz quad-core Intel Core i5 processors, with 500GB and 1TB 7200 rpm hard drives respectively. The faster of the two can be supplied with an optional 2.8GHz i7 processor, 2TB hard drive and additional solid-state drive.

Graphics have been significantly improved across the range, with the top model now featuring an AMD Radeon HD 6970M graphics processor with a full 1GB of GDDR5 memory — so the dedicated graphics RAM is bigger than the hard drive on my first Mac! All iMacs come with 4GB of 1333MHz DDR3 memory, which can be optionally configured up to 16GB from the Apple Store but it's recommended that you source memory upgrades from a third party, such as Crucial, as Apple insist on charging an arm and a leg (and part of your other leg) for this relatively simple upgrade. The 27-inch model can physically accept 8GB modules (not currently available as an option from Apple), and so has a potential maximum RAM of 32GB. Although not officially supported by Apple, some third‑party vendors (such as OWC) offer this upgrade, but at around $3000 it's quite an investment!

The machine on test is the so called 'Ultimate' model, with 3.4GHz Core i7 processor, although, curiously, nothing else is 'Ultimate' about it, unless you count the graphics card! The first thing that surprises you if you take it out of the box is the weight. At nearly 14kg, this is a mighty piece of kit for something that claims a small 'footprint'. The screen is magnificent, of course. Is it possible that you could have made music for this long in your life without being able to see quite so much of it? The native resolution is 2560 x 1440, and that makes perfect sense on a screen of this size. What surprised me was how little I had previously moved my head while working with smaller screens!

A pretty decent array of socketry graces a corner of the new iMac, including two 'Thunderbolt' ports.

With audio line in and out, four USB 2 ports (no move to USB 3, then), one Firewire 800 port, two Thunderbolt ports and a Gigabit Ethernet port, you have a reasonable amount of peripheral connectivity available, but as the new iMac comes with a wireless keyboard and mouse, users of the numeric keypad will need to use up one USB port, as Apple still don't supply a wireless version.

It is, of course, the ports for the new Thunderbolt interfacing that are the big difference here. Each port will support six devices, including one display, and has two channels, each of which can carry up to 10Gbit per second of data. So, per port, that's 10Gbit in both directions simultaneously! When you consider that most 'spinning' SATA drives top out at around 3Gbit/s, and Firewire 800 devices at, well, 800 Mbit/s, daisy chaining (when adaptors are available) becomes a realistic proposition, with enough bandwidth to allow full performance from multiple peripherals in the chain.

Thunderbolt's PCI-e support promises to be of great interest to those whose current music-making requires that format of card. Sonnet, previously known for their Mac processor upgrades, have a PCI-e chassis called the Echo Express in development, which looks very interesting indeed. Thunderbolt can supply up to 10W for peripherals, but the Echo Express will have an integrated 75W or 150W power supply (depending on whether you choose the short-form or long-form model). At the time of writing, there are, of course, more questions than answers. What if you have two or more cards (each Echo Express holds one)? Will Avid support it? Will a Thunderbolt‑based PCI-e system actually end up more expensive than just getting a Mac Pro in the first place? Time will doubtless tell, but these are interesting times for those working in the upper reaches of performance and quality!

In order to provide comparative results, the tests I ran were the same as those used to test the MacBook Pro last month. The two instruments I used were Kontakt, first with the Factory Strings instrument loaded, then with Tonehammer's Montclarion piano instrument (using the 'Montclarion_Piano_Full' preset, one of the larger 'multis', which uses three voices per note), and then Reaktor with the 'Silver Bowl' preset from Reaktor Prism. Since Kontakt runs in both 32-bit and 64-bit modes (whereas Reaktor will only run in 32-bit mode), I tested each combination with Logic Pro running in 32- and 64-bit mode. Reaktor therefore invoked the 32-bit audio bridge when opened in 64-bit Logic.

As before, I also tested each instrument with two I/O buffer-size settings — 64 and 512 samples — to reflect two possible practical situations: performance/recording, and playback/mixing. The same Logic projects were used for this set of tests, with the following features:

As as in previous tests, the figures show the highest track count without any audible glitching or other 'failure'. Where these results differ from last month's MacBook Pro tests and previous tests on older Macs is that the processor and subsystem is now so fast and so capable that the limitation on performance (at least for sample-based instruments) is the amount of physical RAM installed.

But compare the numbers for the same instrument running on the MacBook Pro and the iMac with a 512-sample buffer (where the processor has less influence), or all results for the large sample-based instrument (Tonehammer's Montclarion piano) and you will see a different story. Here, the physical RAM size is the ultimate limit. In most tests on the new iMac, the processor still had headroom to spare, but Logic Pro crashed out due to lack of memory. Four Gigabytes of RAM used to sound like quite a lot, but for some higher end applications it is obviously the baseline. I must admit that I'm still surprised that Apple sell computers with such a small amount of RAM as standard on a model with the 'Ultimate' tag, but I guess it's all about margins, and they will probably make an equivalent amount from those customers specifying an extra 4, 8 or 12 GB at purchase as they do from the machine itself, so I understand the business case!

If you're shortlisting a new iMac and you rely on RAM-hungry sample-based instruments as part of your production process, leave room in your budget for extra RAM. In all other aspects, this new iMac excels, and in value-for-money terms leaves the Mac Pro standing, now that there is no real barrier to future expansion. To sum up, even though only 4GB RAM is supplied and Thunderbolt devices don't yet exist, this machine is very, very fast, as well as being quiet enough for the studio, and when Thunderbolt has taken off, its inclusion here will allow the iMac to connect to a wide range of external hardware. The new iMac is easily its best incarnation so far, and this 'Ultimate' model is the best choice in terms of power and expandability.

I Can See Clearly Now

With two Thunderbolt ports on the 27-inch iMac, you can now hook up two displays with Mini DisplayPort connectors. That's a lot of screen...

The two Thunderbolt ports on the 27‑inch iMac would let you add, for example, four PCIe cards, eight additional SATA drives (in addition to the internal drive and optional SSD), two extra monitors, and audio I/O via Firewire 800. A Mac Pro allows only the three PCIe cards, three additional SATA drives (in addition to the system drive) and one extra monitor. In its favour, the Mac Pro offers four Firewire 800 ports versus the iMac's one. The Mac Pro also officially supports the installation of up to 64GB RAM, but this would probably cost more than your car!

Discussions I have recently eavesdropped might hint that the current Mac Pro could be the last of the breed. Tower computers are so 2003! They are relatively noisy and expensive, and though the current version is undoubtedly good, the alternatives may be looking more attractive. Previous update schedules point to an imminent release, but maybe this will be the rumoured slimmed-down, rackmountable server replacement, or perhaps another incremental adjustment.