There’s lots to get to grips with in the new version of Reason.

We’ve got used to major releases of Reason being quite revolutionary: Reason 6 gave us audio tracks and the big modular mixer, 6.5 ushered in Rack Extensions and then version 7 added MIDI tracks and audio quantise. Within two ‘whole-point’ releases Reason went from being a niche, insular, MIDI-only platform to a versatile full-blown DAW attracting extensive third-party support. Pretty impressive really.

In this context, there’s a risk that the newly released Reason 8 could look a little disappointing. Now available from www.propellerheads.se and dealers worldwide, Reason 8 offers a redesigned user interface, two new guitar-oriented effect devices and, um, that’s about it. That redesign is more than just cosmetic, though. It changes the way you work with some fundamental aspects of the application, all very much for the better. And a new browser, while not particularly sexy in itself, promises to make a big impact on the way we work, speeding up and improving our interactions with the sequencer, the rack, and individual devices. Let’s take a closer look at what those changes are.

Well, one thing’s for sure, Reason 8 looks different. The overall look is brighter, neater and more contemporary. The sequencer and mixer have each lost a not-very-useful navigation panel. The song navigator just above the transport section is a lot smaller. The transport itself no longer has a Blocks button (that functionality is now accessible from the Options menu), and instead gets a super-useful quantise section showing the current value along with a text button to apply quantise to anything in the sequencer that’s selected. And you can hide the transport completely with a command in the Window menu.

Propellerheads’ basic approach to handling the Mixer, Rack and Sequencer views remains pretty much the same, you’ll be pleased to note. Your F5, F6 and F7 keys (respectively) toggle them open and closed, and dragging their horizontal boundaries resizes them. However, the named heading divider strips have little clickable circular buttons to allow them to be toggled with mouse clicks. 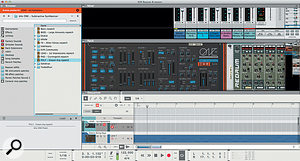 Reason 8’s look has gone notably ‘flat’, in homage to modern OSs like Apple’s Yosemite. But an improved transport, a brand-new browser, and countless other little tweaks promise a much smoother overall experience.It’s all change in the Create menu too, whether you access it via the main menu or a right-click in empty parts of the rack, mixer or the sequencer track list. Reason now no longer makes a distinction between Studio and Creative FX and there are just three device categories: Instruments, Effects and Utilities. Choosing from amongst your burgeoning Rack Extension collection is made easier too, with submenu grouping by developer. Even better, Reason 8 maintains a list of the devices you use most, and displays it at the top of Instrument, Effect and Utilities submenus. 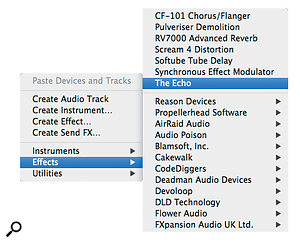 The new Create menu groups your device collection by manufacturer, and offers the ones you use most often in a list at the top.It’s good to see Reason’s handling of device and track naming improved too. The Mix Channel, mixer channel strip and sequencer track for an instrument all get named by default after the currently loaded patch, although you can easily override this — just double-click a name and enter your own. Then, if you later delete your manually entered name the patch name takes over again. 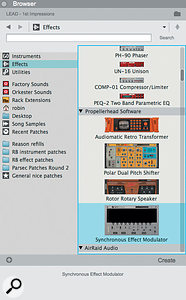 The redesigned browser handles your devices as well as patches, samples and songs. And intuitive dragging and dropping to the sequencer or rack is also fully supported.Finally, three crucial changes have been made in the sequencer. First, you can drag note durations from their left edges as well as the right; a real enhancement when you’re in the thick of MIDI editing. 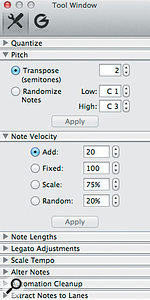 Second, there should be less tool-switching thanks to a more powerful Selection (arrow) tool. Double-clicking (and dragging) in a sequencer track lane creates (and extends) a new clip — you previously had to switch to the Pencil tool to do that. It’s the same for notes and automation points too, only here it’s even better — a Selection tool double-click will also delete existing notes and points.

And last of all, a new command, Duplicate Selection, does in a single stroke what a two-stage copy and paste combo used to. Use it for quickly fleshing out repeated patterns of notes, clips or automation data; just select, then press Cmd-D on OS X or Ctrl-D on Windows. Reason looks at the current Snap setting to determine how far ahead your data should be duplicated, but is intelligent enough to never overlap it with itself, and keep results musically useful, even if the Snap value is very small.

Without doubt, Reason 8’s most far-reaching feature is the new browser. Most patch and file operations used to be done, of course, via a dialogue box that would appear when loading patches, samples and MIDI files, or when using the Create commands.

The browser is now a panel that occupies the whole of the left side of the Reason window. As such, it’s available at all times, and doesn’t lock you out of the rest of the interface during use, as its predecessor did.

So, some quick basics. You show and hide the browser using F3. Drag its right boundary to resize it, or indeed to completely close it. However, it’ll automatically open whenever you click a device’s Browse Patch button, or use the Open/Import command from the File menu.

As to basic functionality, it hasn’t changed much from the old version, which we covered here in SOS exactly a year ago: www.soundonsound.com/sos/nov13/articles/reason-tech-1113.htm. There’s the same two-column layout of folders/favourites and a hierarchical file browser, and it’ll pick up your Locations and Favourites from previous versions.

Crucially, you can now create devices from the browser too. Click on Instruments, Effects or Utilities at the top of the left column, enjoy the new graphical device previews, and then either double-click a device in the list or drag and drop it to the rack or sequencer to instantiate it. Either way, the new device (assuming it has patches) gets what’s called ‘Browse Focus’ — its patch controls are overlaid with a red box, and the browser itself gains a red bar and displays appropriate patches which load as soon as you click on them. You can see this in action in the screenshot.

Cancelling Browse Focus is easy. Press the Escape key, click the ‘X’ icon in the browser’s red strip, or just click somewhere else in the rack or sequencer. And to get it back again you can click any device’s Browse Patch button, the browser’s little ‘folder’ icon, or select a track/device and press Cmd-B (OS X) or Ctrl-B (Windows).

It’s not all about patches either. The browser handles audio files, MIDI files, and songs, as well, and reports information about them in the lowest section of its panel. In the case of samples and audio files you get auditioning controls, an Edit button, and Export, Duplicate and Delete commands via right-clicking the file.

What’s more, the new drag-and-drop features are widely implemented. Drag patches onto devices to load them. Drag new devices (or their patches) onto existing devices to replace them. Drag audio files into ReDrum channels or onto Kong pads to instantly load them. As soon as you get used to it you’ll wonder how you’ve lived without it.

Finally, Reason 8’s browser search is better than it’s ever been before, and is notably quicker. The rule is that searches take place in the current directory and its subdirectories, so be ready to zip up a few levels in the file hierarchy if you need to, or direct your search in a specific place, like amongst the Factory Sounds Refill or your Rack Extensions.

As Reason 8 has redistributed functionality to new parts of the user interface, so the trusty Tools window/palette has suddenly been left looking rather emaciated. It retains only two tabs: Sequencer Tools and Groove Settings. Let’s hope Propellerhead can figure out a way of incorporating these remaining functions into the Transport, for example, then we can do away with it completely!

In last month’s Reason column I looked at a few recent Rack Extension releases that embrace the idea of ‘old school’. To that lot you can add one more: SoundLove’s new $35 RE effect device Phonetic.

This RE has a limited remit: it exists to simulate the sound of vintage radios and telephones, with mic, line noise and speaker simulation, plus hum generation and AM distortion. But it sounds very good, not at all unlike big-money plug-in alternatives like Audioease’s Speakerphone. It can emulate the sound of a clean(ish) modern phone call as readily as something that’s distorted to the point of unintelligibility. It doesn’t have to only be used on the voice; instruments, groups or entire mixes can benefit from it, especially as an ‘ear candy’ generator, being switched on and off briefly using automation.

Phonetic has a trick up its sleeve too. Right-click it, choose ‘Create Track For’ from the pop-up menu, and then you can play it. MIDI notes E4 to D#6 generate various dialling and DTMF tones, while any below E4 generate a random crackle burst.