As Apple's Tiger finds its way around the jungle of Mac users, there's also some new hardware to consider this month, with faster G5 machines hitting the shelves.

Following its release on 29th April, Tiger has pretty much been the subject on every Mac user's lips and every Mac magazine's cover this month — and you'll notice an in-depth feature in the very magazine you're holding that describes what Tiger means for musicians and audio engineers. Even since I finished that article, Apple have released the first minor 10.4.1 update, which you can download via Software Update or from Apple's web site, offering increased stability, along with improvements to many of the bundled applications, such as Mail and Address Book. 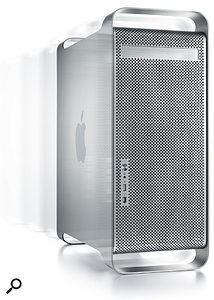 Another interesting Tiger-related point that's become a topic of discussion since its release is that Quartz Extreme 2D, the technology that offers hardware acceleration to applications that draw 2D graphics with Quartz (as opposed to Apple's 'classic' Quickdraw commands from OS 9), is actually disabled by default in Tiger. Although there are ways to activate this feature manually, it seems that Quartz Extreme 2D is not quite ready for prime-time yet and will become activated in a future release as more applications — such as Steinberg's forthcoming 3.1 updates for Cubase and Nuendo — use it for graphics.

The Fastest Mac — Ever!

It's funny how often I end up using the phrase "the fastest Mac system ever" in Apple Notes — every time Apple update their top-of-line model, of course — and it's time to use it again this month, with the coming of a revised line-up of Power Mac G5 models that features, well, the fastest Mac system ever. Retaining the entry-level 1.8GHz model (and its specification) that was added to the previous generation, Apple have speed-bumped their dual-processor Power Mac G5 models to offer either 2GHz, 2.3GHz or 2.7GHz G5 processors, which feature 1GHz, 1.15GHz and 1.35GHz front-side busses per processor respectively. Although these three models all come with 512MB DDR400 memory as standard, the dual-2GHz model can only be upgraded to 4GB, while the dual-2.3GHz and 2.7GHz models can be upgraded to the full 8GB.

For graphics, the 2GHz and 2.3GHz models offer ATI Radeon 9600 graphics cards with 128MB memory, featuring two single-link DVI ports, while the 2.7GHz model has an ATI Radeon 9650 card with 256MB memory, one dual-link DVI port and one single-link DVI port. This means that the dual-2.7GHz Power Mac G5 supports one 30-inch display out of the box, while an upgrade is required for the other Power Mac models to do this. You can choose the 9650 card as a built-to-order option for an extra £30, or an Nvdia GeForce 6800 Ultra DDL graphics card for an extra £330 if bought with a dual-2GHz or 2.3GHz model, or an extra £300 if bought with a 2.7GHz Power Mac. The advantage of the Nvidia card is that it offers two dual-link DVI ports for attaching two 30-inch displays (although the 9650 card is good if you only need one 30-inch display as, unlike the Nvidia card, it doesn't obscure one PCI-X slot).

While these graphics options range from competent (for the Radeon 9600 and slightly tweaked 9650 model) to pretty impressive (for the Nvidia card), it's perhaps disappointing that the interface used for the Power Mac's video cards is still AGP 8x Pro rather than PCI Express (as featured in the majority of Intel Xeon-based workstations, and even Pentium 4-based systems) to push the Power Mac's graphics abilities even further.

For storage, the 2GHz Power Mac includes a 160GB 7200RPM SATA drive, while the 2.3GHz and 2.7GHz models offer a 250GB drive instead; all models now include a fast 16x Super Drive, though, capable of writing dual-layer DVD discs able to store up to 8.5GB of data. In terms of expansion, the dual-2GHz model (like the single 1.8GHz) offers three full-length 33MHz/64-bit PCI slots, while the other models provide one 133MHz/64-bit and two 100MHz/64-bit PCI-X slots.

The issue of buying a new Mac for Pro Tools is a little thorny at the moment, since neither Apple's new dual-processor Power Mac G5 models or Tiger are qualified to run with Pro Tools. The issue of the computer is fairly straightforward, in that Digidesign just haven't tested it yet, so hopefully it will become qualified at some point in the future; the issue of the Pro Tools software isn't quite so easy, since the actual application won't work. The solution might be just to take your chances, buy a new Power Mac, install Panther and see what happens. However, a Tech Note on Apple's web site (http://docs.info.apple.com/article.html?artnum=25497) warns not to install an earlier version of Mac OS X than the one supplied with your system, and specifically "If, for example, you have a Power Mac G5 (early 2005) that came with Mac OS X 10.4 Tiger installed, you will not be able to start up to a Mac OS X 10.3 Panther disc or install from it." Hopefully this issue will be resolved fairly soon as, at the time of writing, it creates a really awkward situation for those wanting to purchase new Pro Tools rigs.

How Fast Is The Fastest?

I've been thinking about getting a new Mac for a while, and with the release of new Power Macs that will hopefully remain at the top of Apple's line-up for the next six months I gave into temptation and ordered a 2.7GHz machine. I opted for the basic model and bought an additional 2GB memory (giving me 2.5GB in total), because while I was tempted by the prospect of wireless options and the Nvidia graphics card, I decided that these were things that could be added later if I felt I really needed them. Even the Bluetooth module can be added later by an Apple-approved service centre these days, and, in all honesty, wireless peripherals irritate me because I don't want my keyboard and mouse running out of power, and having a spare USB port on the keyboard (after the mouse is plugged in) is useful for dongles and memory devices. 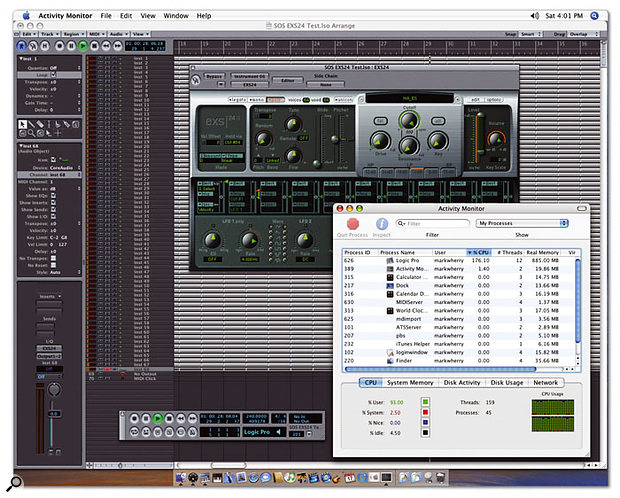 Here you can see the dual-2.7GHz Power Mac running EXS24 in Logic Pro 7.1. Notice in Activity Monitor that the Dashboard Widgets, such as Calculator, aren't using any CPU resources.

Having tested the previous 'top of the line' Power Mac G5 models — the original dual-2GHz and the recent 2.5GHz model — I decided to see how the new 2.7GHz monster fared with the same tests, this time in Logic Pro 7.1 running on Mac OS 10.4.1. There's a slight caveat, since both the 2GHz and 2.5GHz models were tested on Panther as opposed to Tiger (which offers more bells and whistles, such as Dashboard), although I'm fairly happy that the varying versions of Logic I've used over this time have a fairly consistent processor footprint, as demonstrated when the 2.5GHz model was tested in February's Apple Notes.

One other factor worth bearing in mind when looking at processor usage is that while Mac OS X's Activity Monitor is useful for benchmarking, this utility itself requires some CPU resources to work. When I ran tests with Logic, I noted around 1.4 percent usage for the utility, where the maximum theoretical usage overall is 200 percent for a dual-processor system.

Moving on to EXS24, I loaded the usual 'HA_ES' Harp patch from the Vienna Symphonic Library and disabled the Virtual Memory option for disk streaming, to concentrate the results on processor and memory performance. Using the sample's original 16-bit storage format with the filter disabled, I could play back 844 voices (13 instances playing 64 voices and one instance playing 12 voices) with 95 percent CPU usage, compared to 752 and 704 voices for the dual-2.5GHz and dual-2GHz models respectively. Enabling the filter brought these figures down to 384 voices (6 x 64) with around 85 percent User CPU usage, compared to 240 and 192 for the 2.5GHz and 2GHz models respectively.

Enabling 32-bit floating point storage for samples always gives a significant performance boost, in addition to increasing the memory footprint required for the samples, and here the dual-2.7GHz excelled, being capable of playing 4224 (66 x 64) voices with 93 percent User CPU usage, over the 3648 and 3264 voices attained by the 2.5GHz and 2GHz models. So, overall, while the new high-end PowerMac doesn't offer any significant features over the previous generation, the extra speed is definitely going to be welcomed by users requiring host-based processing.

Apple's new iMac G5 line-up again consists of two models with a 17-inch screen, featuring either a 1.8GHz or 2GHz G5 processor, and one model with a 20-inch screen and a 2GHz G5 processor. The buss speeds of these systems have also been increased, to 600MHz for the 1.8GHz and 667MHz for the 2GHz machine. Perhaps best of all, though, is that all iMac G5 systems now feature 512MB DDR400 SDRAM as standard (which is now a minimum requirement for running Logic 7.1, incidentally). While each system also includes built-in Bluetooth 2.0 and Airport Extreme, the wireless keyboard and mouse is still optional. On the subject of networking, another improvement is that the Ethernet port now supports Gigabit (1000Mb/s), which is great for those users wanting to get more from Logic Pro 7 's distributed audio functionality.

In terms of storage, the 17-inch iMac G5 models now offer 160GB 7200rpm internal SATA drives, while the 20-inch model has a 250GB drive (compared to 80 and 160GB respectively in the original models' specifications). The 2GHz iMac G5 models also now offer an 8x Super Drive (rather than a 4x model, as before) with dual-layer support, while the 1.8GHz model still has a Combo Drive. Last, but not least, in terms of graphics all iMac G5 models come with ATI Radeon 9600 AGP 8x graphics cards featuring 128MB of video memory, as offered in the new mid-range Power Mac G5 systems.

When I originally reviewed Apple's iMac G5 back in December 2004, the timing of the review happened to coincide with the introduction of an entry-level Power Mac G5. While I thought the iMac G5 was a great entry-level system for musicians who wanted to take advantage of a system that had a G5 processor, it was hard to justify recommending this Mac wholeheartedly when, except for the cost of a monitor, you could get more features by buying the 1.8GHz Power Mac G5 for basically the same price as the 17-inch iMac G5 with the 1.8GHz processor. This situation has now changed, as the revamped iMac G5 range offers a significantly better feature set for the same money.