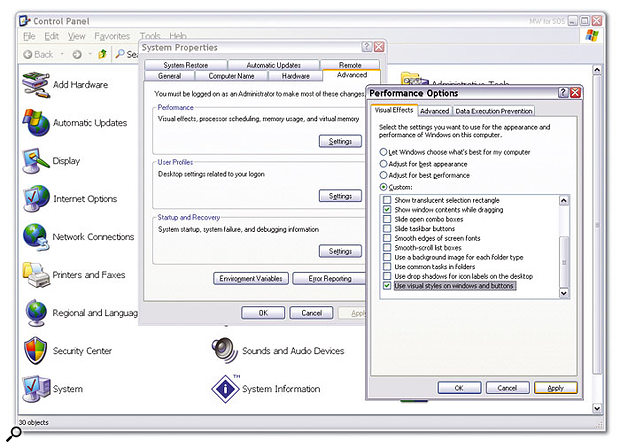 For musicians who want to achieve maximum performance from their PCs, but don't want to lose the XP 'look', these two visual effect settings are probably the only ones that should be ticked.

If you're having problems with your setup, a methodical approach can save frustration. PC Notes offers some advice.

SOS readers regularly email me details of problems they're having with their music PCs, and I always do my best to help if I can. However, it can be difficult to fault-find on a machine that you've never seen before. This is especially true if it's stuffed to the gills with assorted software that you've never run yourself (some of whose files may just be part of the problem). Of course, it's even trickier to analyse possible causes of problems if you don't have the machine in front of you.

Posting your problem in the PC Music conference of the SOS Forums is often a sensible approach, especially if it involves obscure symptoms that might be recognised by someone who experienced a similar problem at some stage and discovered a cure. The only disadvantage is that some symptoms may have many possible causes, and sometimes the list of suggested solutions given in good faith on a forum may lead you astray. For instance, I've spotted quite a few 'audio click and pop' problems that have taken posters on a tortuous journey into arcana such as manually changing IRQs and altering PCI Latency Timers, when they later turn out to have a much more mundane cause, such as an intermittent audio cable or badly seated PCI card.

Whatever your PC problem, you can help yourself by trying to narrow down the cause. The easiest approach is substitution (one reason why commercial system builders have an advantage when it comes to troubleshooting, since they generally have piles of hardware components to swap over to see if that cures the problem). But even without this head start, there's plenty you can do to help yourself. If it's an intermittent problem, start by re-seating all your expansion cards and cables and swapping any external audio cables. If it's a MIDI or audio problem with Cubase, Logic or Sonar, for example, try downloading a freeware sequencer from the Internet or attempt basic playback duties with a simpler application such as Windows Media Player. If the problem disappears, that's an indication that it could be due to your main sequencer software, rather than being hardware related.

If you're a fan of shortcuts, there are quite a few you can type into the Windows Run menu that I haven't yet mentioned in these columns. Sometimes it's far quicker to enter these than to navigate through a sea of nested icon-based menus to find the appropriate shortcut, especially since you can launch the Run dialogue window itself using the Windows-R shortcut. Here's a list of the most useful ones:

If you suspect that your audio interface is at fault, save an image of your Windows partition, using something like Norton's Ghost, then borrow a friend's interface and install the latest drivers for that, to see if the problem disappears. This course of action is becoming increasingly easy now that so many Firewire interfaces are available: you don't even have to open up your PC, and once you restore your image file the temporary drivers you installed for the borrowed interface will be gone. Or, conversely, persuade a friend to let you temporarily install the drivers for your interface on their machine to see if the same problem occurs. If it does, the interface is probably the culprit.

Sometimes intermittent or crashing problems during playback of a particular song may be due to you running your PC close to the edge of its processing capability, so try temporarily disabling one or two plug-ins or soft synths, to see if the problem goes away. This approach is also useful in tracking down possibly buggy plug-ins.

Also, while it's comparatively easy to flail in every direction trying everything you and the world can think of, make an effort to be systematic: it can often pay to take a few notes on what tests you've tried and what you're doing each time the problem occurs, in the hope of noticing a trend. If you think you've tried everything and now suspect fundamental Windows or application file corruption, you don't necessarily have to re-format your drive and start again, as so many people seem to do. If you've got plenty of hard drive space left, you can instead create an additional Windows partition, with a utility such as Partition Magic, and install Windows and the absolute minimum music applications you need on that. If that works properly, you can add everything else you need slowly and surely, re-testing occasionally to see that everything is still performing well, without having to abandon your previous Windows partition, until you're absolutely sure the problem has gone away.

Finally, when you do eventually find the cause of your problem, please post it on the SOS PC Music forum to let everyone else know. You may help to save someone else from tearing their hair out in future.

Windows can be visually tweaked in many ways, from colours, images and fonts to the sizes of graphic elements such as title bars, window borders and buttons (and in more extreme ways with third-party add-ons — see 'Skins & Alternative Desktops' box). Windows lets you save these settings as a 'Theme'. It's worth tweaking aspects of the existing Themes, such as the size of title bars and their associated fonts, to get the best compromise between maximum screen real-estate and maximum legibility when running a sequencer, and if you've recently bought a larger screen you'll also benefit from revisiting such settings and saving a new 'personal best' setup — or several, if you regularly switch screen resolution.

Most visual settings can be found in the Display applet (summoned by right-clicking on the desktop and selecting 'Properties'). On its Screensaver page, select 'None', to avoid untimely interruptions during long audio recordings, and on the Desktop page select 'None' for background, rather than using a bitmap (this reduces graphic memory usage and complex redraws every time you resize a window). Those with multi-boot setups or using multiple drive caddies will make their lives easier if each Windows boot partition has a different desktop colour, so they always remember which one they're currently running.

All the more advanced settings, including font selection, border size and so on, can be found by clicking on the 'Advanced' button found on the Appearance page. You can choose which item to alter by clicking on it in the associated display window, or via the drop-down Item menu beneath. Like most musicians, I also prefer to disable all the graphic bells and whistles, such as animated menu and tool-tip transitions, shadows under menus, and so on, to help streamline audio performance. These settings can be found on the Advanced page of the System applet, in the Performance section.

To ensure optimum results you can simply click on 'Adjust for best performance', although personally I enable 'Use visual styles on windows and buttons', to get back the XP skinning options, and 'Show windows contents while dragging', but leave the others unticked.

I also use Themes to provide a selection of colour schemes that are suitable for my SOS screen shots, but when I'm making my own music I always use the Silver XP style, because I find that a neutral colour scheme makes sequencer colours stand out more clearly. 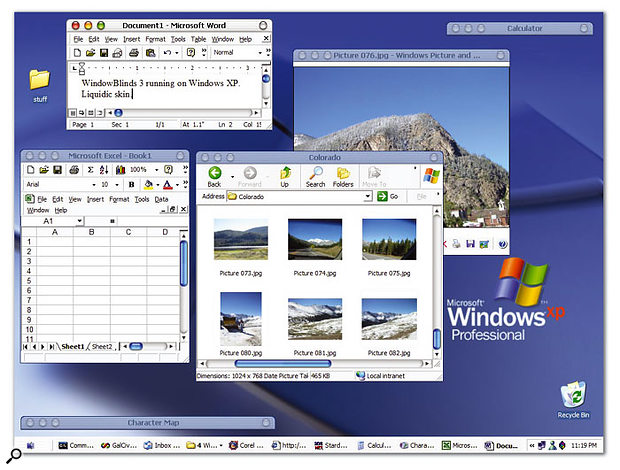 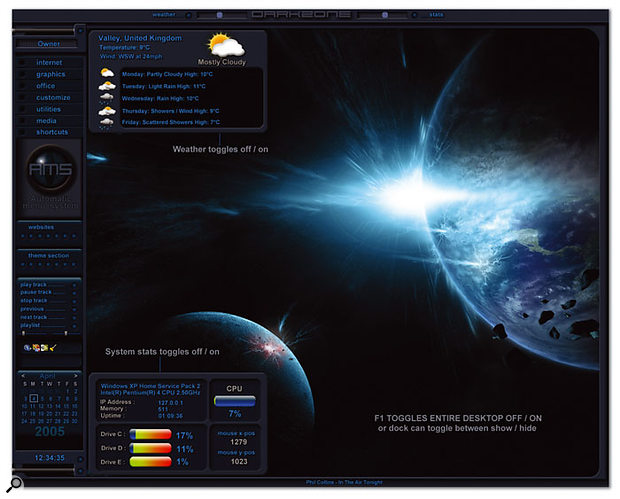 If you want your PC to look like a Mac, or adopt a completely new graphic interface, there are plenty of skins and extensions available for download. Just beware of adding extra processing overhead.

There are many third-party utilities that change the Windows graphic interface in more extreme and exciting ways than you'd normally be able to, such as Windowblinds (www.windowblinds.net), DesktopX (www.desktopx.net), and Hoverdesk (www.hoverdesk.net), as well as web sites dedicated to skins and themes, including Wincustomize (www.wincustomize.com), Lotsofskins (www.lotsofskins.com), and Deskmod (www.deskmod.com). 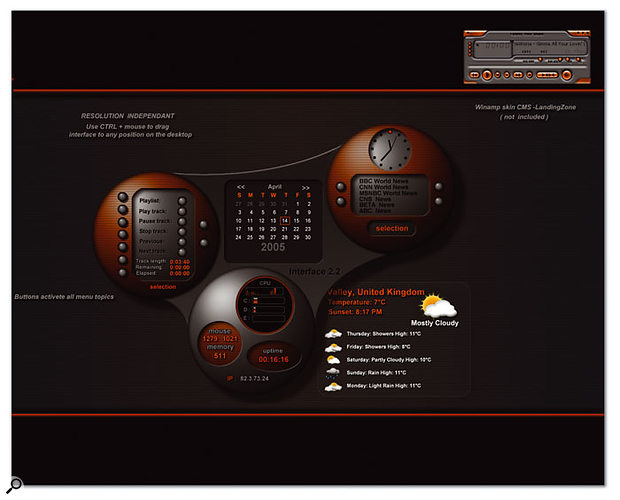 These are great if you want to make your PC look like Mac OS X, add animated objects to the desktop or enhance the Taskbar. However, don't install them if you're a musician who wants to extract the last ounce of real-time performance from a PC, since they may add a tiny overhead to the operating system. Remember that once your sequencer is running in full-screen mode, only the new title bar and scroll bars will be visible anyway.

When you've got a tweaked Theme that suits you, it will appear on the Themes page of the Display applet as 'modified', and you then normally click on the associated 'Save As' button to launch the normal Windows dialogue, where you can enter a name for your creation. However, quite a few people (including me) have found that they can't save their own Themes: what happens is that the appropriate dialogue window appears correctly, but after you press the 'OK' button no file is actually saved. The answer seems to be a missing Windows file named 'Windows Classic.theme', which is just 2Kb in size. Once I'd replaced this file in the 'C:/Windows/Resources/Themes' folder the problem disappeared, and I was able to save Themes once more. I've no idea why this file disappeared on my various XP installs, but if the same thing ever happens to you, download a copy from www.active-outsides.com/ download/Windows_Classic_ Theme.zip.

As part of each Theme, Windows also lets you save a set of WAV sounds that are assigned to specific events, such as Logon, Logoff, Welcome, button clicks and so on. I always choose the 'No Sounds' scheme, to avoid the possibility of 11kHz and 22kHz system sounds accidentally being played by my audio interfaces. Many modern interfaces don't support such low sample rates directly, and if yours is one of those that do not, Microsoft's sample-rate conversion codec may spring into action behind the scenes to play back the sounds for you — and if this happens it has been known for the current sample rate of any open audio project in your sequencer to be changed, resulting in slow playback at the wrong pitch. I've even heard stories of the sample-rate converter remaining 'in circuit' until the next boot, so that although 44.1kHz files play back at the correct pitch, they are still being processed through the sample-rate converter, with audio degradation as a result.

Although each saved Theme is supposed to incorporate your choice of system sounds, in my experience switching between different Themes resets the Sound scheme. It's thus important to force the sound scheme back to 'No Sounds' whenever you change your visual Theme, just in case. Another annoyance is that some applications install their own system sounds into the current Theme without telling you, so it's worth periodically checking in 'Sounds and Audio Devices' that you have no unexpected system sounds lurking that could affect your sample rate.