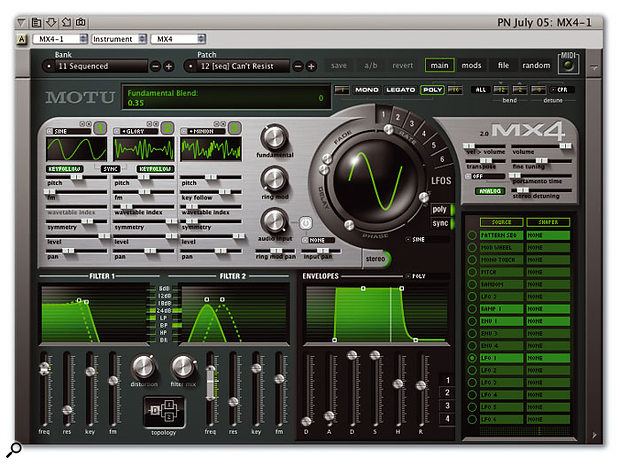 The very American MOTU MX4 v2, a superbly flexible synth with wavetable oscillators, mind-boggling modulation options and a surprising level of user-friendliness. It uses a bit of processor, though — gentlemen, start up your G5s!

Tiger, Apple's latest version of OS X, has some implications for Digital Performer users. Happily, they're nearly all good...

There's always some uncertainty as to how a complex application such as DP will get along with a new operating system, so it's nice to be able to report that users of DP 4.52 upgrading to Mac OS 10.4 are having a fairly easy time of it.

If you're installing DP on a new Mac already loaded up with Tiger you'll have no problems at all — a normal installation of DP 4.52 should work right away. However, if you've upgraded a Mac running OS 10.3 or earlier that already has DP installed, you may experience some crashes when you try to play a DP project. The solution is easy: go to Applications / MOTU DP 4.5 Folder and trash the Digital Performer 4.52 application file. Then run a DP 4.52 installer again, either from your installation CD or the DP 4.52 updater available from www.motu.com. Incidentally, this same application-trashing technique works for Audiodesk users too, except that they should reinstall from the new Audiodesk 2.04 public beta installer available from the MOTU web site.

Once you've got DP working in OS 10.4, you should notice some useful enhancements. Tiger's new device-aggregation capabilities will seem like no big deal, since DP has had a built-in equivalent for quite a while, but they could be useful if you (gasp!) use other audio applications as well as DP. Exposé now handles DP 's Consolidated Window and plug-in windows properly, and Apple's new AUNetSend plug-in could well end up fulfilling a similar role to Apulsoft's Wormhole in facilitating multi-channel audio connections between computers connected via Ethernet. Not quite distributed processing, but a step in the right direction. Similarly, Tiger's Network MIDI features should make Musiclab's MIDI over LAN redundant for some users.

After you've got DP sorted out, there are more Tiger-related installations to do if your setup includes MOTU hardware. The updated USB MIDI driver, v1.31, that I mentioned last month is essential if you're using a MOTU MIDI interface with OS 10.4. But if you also use a MOTU audio interface, you'll need to download updated drivers for it. The MOTU Firewire Audio driver and console package v1.2.5 supports Tiger but is a recommended installation for all users, as it's backwards-compatible with OS 10.2 and works with every Firewire interface MOTU have ever made. The same goes for the PCI Audio driver and console package v1.08, which supports both the PCI324 and PCI424 cards and everything from the original 2408 interface to the HD192. Finally, there's a Tiger-compatible public beta version of Mach Five that should keep users of this software sampler happy — at least until Mach Five v2 comes along.

MOTU's MX4 'multisynth' (see screen above) has been updated to version 2 and implements the new features I mentioned in April's Performer Notes column, as well as being compatible with OS 10.4. For MX4 v1 owners the update is free. For everyone else this mega soft-synth costs £199. In a break with MOTU tradition, MX4 v2 is available as a 14-day demo download, so you can try it before you buy. Nice one MOTU!

Universal Audio's UAD1 powered plug-in card is a favourite with many DP users, as it properly supports the MAS plug-in format. Sadly, though, a few of them found out the hard way that the latest driver package as I write this (v3.8) isn't compatible with OS 10.4. Universal Audio may have released a fix by the time you read this, however.

It's also worth noting another issue that affects the UAD1 and TC Electronic's Powercore PCI and only emerges when you use one of these cards in conjunction with a Firewire audio interface and some Power Mac G5 models. It appears that a chip in the G5 that's responsible for controlling data flow between the Firewire and PCI busses can sometimes give rise to increased processor load and spikes when using the 'powered' plug-ins — exactly the situation they're supposed to prevent! This sort of behaviour has been identified in second-generation G5s with PCI-X slots (the 'old' Dual 2.0GHz and Dual 2.5GHz machines), but it's not clear yet whether the 'new' G5 line-up is affected. Watch this space for more details. In the meantime, if you're planning on spec-ing a system that will rely heavily on powered plug-ins and a MOTU Firewire interface or two, it may be worth digging around on Internet forums for the latest info, and possibly considering the non-PCI-X models over their higher-spec'd brethren.