We introduce some of the best free plug-ins for Pro Tools 11.

One of the great things about Steinberg's VST plug-in standard is the huge community of developers who have taken advantage of its downloadable SDK to produce innumerable freeware and shareware plug-ins. By contrast, Avid's RTAS and now AAX plug-in formats have tended to be the province mainly of professional products that are often quite costly. However, there are developers who make available free plug-ins for Pro Tools, and as we've all just been through the expense of Christmas, I thought this would be a good opportunity to take a look at some of the free plug-ins that will work in the new 64-bit AAX Native format used by Pro Tools 11.

This bundle includes not one but six excellent plug-ins, all worth having in your Pro Tools 11 list: a trio of modulation effects (chorus, flanger and phaser), a single- and dual-channel equaliser, a MIDI-controllable gain plug-in and a comprehensive spectrum analyser. For me, working mainly in post-production, the highlight of the bundle is the Gain Suite. A lot of the files I get to work on have not been recorded by professionals, so the levels and stereo image can be all over the place. Since Pro Tools 10, I now have Clip Gain to help with levels, but for stereo image I used to use pan automation to narrow the stereo field, which is cumbersome. Now I can simply insert this plug-in onto any of my tracks and use it in M/S mode, with the Mid Gain control as my gain trim and the Side Gain control adjusting the width of the image. On the occasions when one side is lower, I switch it to L/R mode and use the gain trims to even up the left and right gains. Job done.

You don't expect to find a good real-time spectrum analyser in a free plug-in bundle, but Blue Cat's FreqAnalyst is one such. 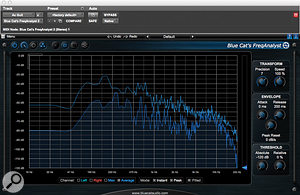 It has an unusual threshold system designed to let you see the relevant parts of the frequency spectrum, and if you need to focus on a specific frequency range, you can zoom the display to show only the part of the graph you are interested in. This is great, especially when you aren't sure what frequencies are causing you problems, as you can use the FreqAnalyst plug-in to track down issues before employing the appropriate tool to fix them.

The three-band, semi-parametric Triple EQ has its three filters' controls linked, so that they behave like one complex filter. It has a wide (±40dB) gain range per band, and bandwidth variable between 0.01 and five octaves, making it easy to create complex filter curves. The dual-channel version can also be set to provide independent left/right or mid/sides equalisation, and both channels can be linked together in various ways, letting you, for example, use it as a frequency-dependent panner.

The Chorus plug-in offers the gentle motion you'd expect but, at more extreme settings, lets you drastically change the original sound to create "deep pitch modulation or crazy 'bubbling' effects”. The Spread control on the stereo version facilitates variable-width chorus treatments. The second of the three modulation plug-ins is a stereo Flanger. I love to use flanging, especially on acoustic guitars and strings to spread and thicken the sound, and for helping to create other-worldly vocal effects. Blue Cat's Flanger is a very versatile example, offering everything from piercing and metallic sounds to soft filtering effects.

Finally, the Phaser plug-in lets you apply up to 32 phasing stages for a rich and obvious effect, or, with the wet/dry mix and feedback parameters set low, you can use it for subtle chorus-like modulation. You can also invert the polarity of the signal in the wet and feedback paths, which offers alternative sounds to the default in-phase settings. As with the other modulation plug-ins in the bundle, the presence of the Spread control in the stereo version lets you obtain deep stereo-widening effects as well.

IK Multimedia's mastering suite has evolved into a Custom Shop arrangement, where a basic 'shell' plug-in can be decked out with additional modules. The additional modules are mostly paid-for upgrades — though you can try them for 72 hours before you part with your money — but the basic T-Racks CS shell is free, and comes with the Classic Equalizer module 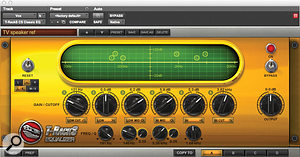 , a six-band parametric mastering EQ, and the T-Racks Metering Suite, which contains a host of useful and detailed displays including peak, perceived loudness, phase and RMS meters, plus a spectrum analyser with peak, RMS and averaging indicators. Both the equaliser and meter plug-ins can be instantiated as separate plug-ins in Pro Tools, or as part of the integrated T-Racks shell, which features eight plug-in slots, and allows you to chain up to 12 processors.

In the same vein, the free version of IK Multimedia's Amplitube 3 CS guitar amplifier and effects modeller has 24 models, including a digital chromatic tuner, nine stompbox effects, four amps, five speaker cabinets, three microphone models and two rack effects. From the 'in plug-in' shop you can try out and buy additional modules.

The Free Ranger plug-in is based on the SPL Full Ranger EQ from their EQ Rangers series. 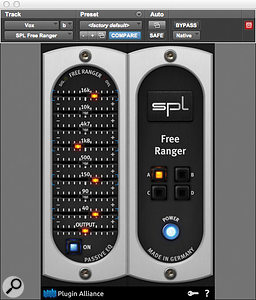 It is basically a graphic EQ with four carefully chosen bands. These are 16kHz, for adding glitter, brilliance, or air; 1.8kHz, which can be boosted for more bass definition and presence, or cut to reduce 'honk' and metallic sound on brass instruments; 150Hz, which gives warmth when boosted or clears up muddiness when cut; and 40Hz, for enhancing or controlling sub-bass content.

HOFA, who produce the IQ Reverb convolution plug-in reviewed in last month's SOS, also make a number of free plug-ins. As creatives, we are often not very good at tracking the time we spend on a project, which makes it harder to track what we need to charge the client. HOFA 4U ProjectTime helps you to keep track of how long you are working on a particular project, and starts measuring elapsed time as soon as it gets loaded into a plug-in slot in Pro Tools. ProjectTime shows the time which has passed during a DAW project, and has a pause function for those important breaks. The stopped time is saved with the closing of the project, and time measurement resumes when the project is reopened. It writes log files that show when you worked on the project, and every log entry can be commented on. It works on both Windows and Mac.

Meter, Fader & MS Pan is an unassuming but very useful plug-in, which regular readers will have noticed already in last month's article on M/S processing. As a level meter, it incorporates the EBU R128 loudness spec, so the middle bargraph can be configured to read Loudness in a range of formats as well as momentary, short-term or integrated EBU readings. A fader lets you adjust the gain, and you can trim the left and right channels separately. There is also an interesting pan option that enables you to bring each side in or out. It is a departure from conventional pan control design, but I like it! As we saw last month, an M/S decoder is built in, letting you matrix M/S stereo into L/R or vice versa. Finally, the buttons by the side of the fader include a mono button, which is really useful to check mono compatibility if you don't have that feature in your monitoring path.

Finally, HOFA's Goniometer & Korrelator is a very interesting take on the visual 'jellyfish' meter that can display image width and position as well as phase between the channels.

It is switchable between goniometer with peak, hold and energy displays and correlation meter. The plug-in window is resizable, so you can make it big when you need to see it in detail, or keep it small so it doesn't take up too much screen real estate. Again, it works on both Windows and Mac platforms.

If you want to know more about how to mix with nothing more than free plug-ins, there is an excellent video tutorial series on Groove 3 covering using free plug-ins in Pro Tools, which shows what can be done without spending a penny on additional effects or processors.

Many people are still confused about what plug-in formats they can use. The answer depends on which version of Pro Tools you have. To recap, the new plug-in format introduced in Pro Tools 10 is called AAX. Within this category, you will find both 32-bit and 64-bit AAX plug-ins, as well as AAX Native and AAX DSP plug-ins. AAX Native plug-ins do not require extra hardware to run, whereas AAX DSP plug-ins are coded to run only on the DSP chips in Avid HDX systems. Pro Tools 10 was a 32-bit application and can only run 32-bit plug-ins, and conversely, Pro Tools 11 will work only with 64-bit plug-ins.

Pro Tools 10 can also use the older TDM and RTAS-format plug-ins. RTAS plug-ins are the 'native' ones that run on the host computer's processors, while TDM plug-ins require the DSP chips on the HD TDM cards in Pro Tools HD systems.

To check out what plug-ins are available in AAX 32-bit or 64-bit formats, check out the AAX Database on Pro Tools Expert: www.pro-tools-expert.com/aax-database.

The Console That Changed Mixing Forever
1 day 18 hours ago.