Giving yourself plenty of headroom when recording will help you get the most out of your plug‑ins and give you greater flexibility when mixing.

In the dim and distant days of analogue audio production, the limitations in the signal‑to‑noise ratio of contemporary equipment meant that engineers had to make sure that audio passing through each piece of equipment was as ‘hot’ as possible. This usually meant aiming for the VU meter bouncing around the 0dBu level in mixers, effects and tape machines. But that was until engineers found out that some equipment sounded wonderful when you exceeded these sensible levels!

Things are very different in the digital realm, and it’s taken quite a while for us to really understand what the ‘best practice’ might be when recording and mixing in the brave new world of ‘in‑the‑box’ production. Understanding how you might deal with gain at different stages of the recording, mixing and mastering processes is crucial — especially if you want to break any ‘rules’ that may exist!

Virtual effects have become much better over the years at modelling the nonlinear characteristics of analogue circuitry, and many respond in almost the same way as their hardware counterparts...

No Gain, No Pain

It’s important to be clear about the relationship between analogue (dBu) and digital (dBFS) levels, as these are not the same thing at all. While you can push an input signal into an analogue mixer to well over 0dBu until its electronic headroom is reached, if you exceed 0dBFS with an analogue‑to‑digital (A‑D) converter, you’ll get digital distortion — which is very nasty and usually unwelcome. There is no headroom over 0dBFS in the digital world and the signal is basically shorn off, or ‘clipped’. If you want to play about with this kind of distortion, it’s better to record cleanly and add clipping in post-production, where you have a chance to change things if they go wrong.

The very best A‑D converters have a dynamic range (ie. the difference between the loudest and quietest signals they can represent) of around 120dB, but 24‑bit digital recordings have a dynamic range of 144dB (16‑bit is 96dB), so there’s no need to keep your meters close to maximum any more to reduce noise levels. Giving yourself plenty of headroom when recording will give you greater flexibility when mixing. At the other end of the signal chain, you should never push levels right up to 0dBFS (or above) at your stereo output channel, as this will clip the digital‑to‑analogue (D‑A) converter. Perhaps perversely, some people appear to like the sound when this happens, but even if that’s the case, you need to be aware that some playback systems, especially CDs, can have problems playing back audio that clips at 0dBFS. And if you’re sending a mix out for mastering, you’ll want to ensure your final mix peaks several dB below 0dBFS, to give the mastering engineer plenty of headroom to work with.

Some people like to keep all the levels of each channel peaking at or below the ‑18dBFS mark.

Screen 1: Logic’s Gain and Level Meter plug‑ins are extremely handy for keeping an eye on your levels at all stages of the signal path.Once you have your nicely recorded audio, you’ll want to mix it into a stereo or multichannel file. Some people like to keep all the levels of each channel peaking at or below the ‑18dBFS mark. One reason you might want to do this is that it makes it less likely you’re going to overload the stereo output. It also can make sense if you’re using virtual recreations of effects processors. The best of these emulate every part of analogue circuitry, including the input and output gain stages, which means that they will expect a certain amount of headroom. Peaking at ‑18dBFS will often achieve this, but there’s no universal rule — you’d need to read each individual plug‑in manual to find out if any specification is given.

If you’re using no plug‑ins on a channel, or are relaxed about your meter levels, you can run individual channels into the red with no audible ill effects — the internal headroom of Logic is, to all intents and purposes, infinite. But for analogue‑modelled plug‑ins, it’s wise to treat 0dBFS as the equivalent of the hardware’s ultimate headroom. Many plug‑ins have input and output gain controls and meters, but for those that don’t, I usually put a Gain plug‑in (and Level Meter) before and after the software so I can control the input and output levels, as shown in Screen 1.

With software such as UA’s 1176 plug‑in, I’d feed it ‑18dBFS then use the 1176’s input knob to adjust the level going into the compressor, but with the excellent Logic Compressor plug‑in in Vintage mode (Screen 2), I’d use that plug‑in’s own input control to set the level into the compressor at ‑18dBFS for uncoloured compression, and use the same control to ‘push’ the input level up closer to zero on the plug‑in’s VU meter. I then use the output level knob to bring the level back to around ‑18dBFS on the channel. 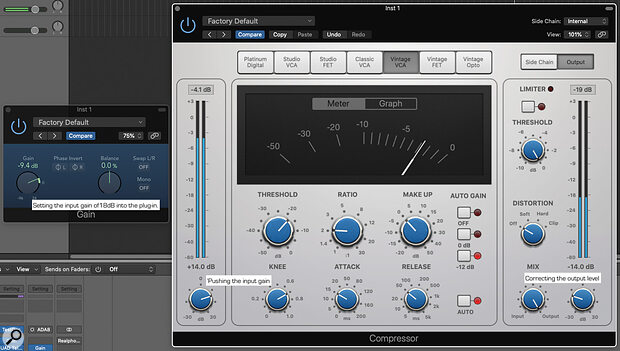 Screen 2: Logic’s Compressor is one of many plug‑ins that responds differently according to the level you feed it.

The sonic effect of working with different input levels is quite noticeable in the UAD and Logic compressors, as well as in many of the best‑quality modelled plug‑ins. The UAD plug‑in also has a variable ‘headroom’ level, from 4 to 28 dB, so you can experiment with how the input level affects the distortion and compression characteristics with differing levels of available virtual headroom.

Distortion and saturation plug‑ins are particularly sensitive to the input levels fed to them. Logic’s Overdrive has a simple Gain parameter that increases the harmonic content of a signal passed through it, but it responds quite differently if you send it a signal peaking at ‑18dBFS or one pushing (or exceeding) the 0dBFS maximum.

Logic’s Vintage EQs have no input controls, so the characteristic of any saturation effect is entirely dependent on the level of the signal fed to it — clean at or around ‑18dBFS, and more coloured as you push the level towards 0dBFS. The Tube EQ is modelled on thermionic valve circuits, and using a Gain plug‑in before the EQ to increase the input level nicely emulates the effect of ‘pushing’ a valve hardware unit to saturation, but don’t forget to add a Gain plug‑in after the EQ to bring the output level back down to ‑18dBFS. Doing this is important as we humans usually perceive louder to be ‘better’, so you need to audition any processing without gain changes. Try doing this with all the EQ controls flat to hear how the audio is changed just by being passed through the plug‑in.

I find DDMF’s affordable Plugindoctor (https://ddmf.eu/plugindoctor) useful in helping me visualise how software is affecting my audio, but you can get similar information using a mixture of Logic’s meters and the free Voxengo Span plug‑in (www.voxengo.com/product/span). 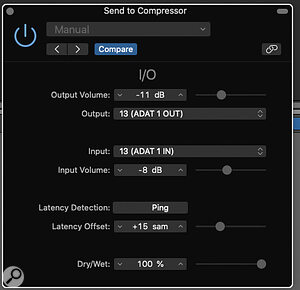 Screen 3: The I/O plug‑in lets you adjust the output and input volume, which is invaluable when sending audio out from Logic to be processed by external hardware.If you’re working in a hybrid fashion, mixing digital processing with hardware, you also need to take care with the levels you are sending to your physical outputs. The I/O plug‑in (Screen 3) helpfully has input and output level controls to help make sure you’re sending the right amount of audio to your hardware to best make use of its particular properties. I often use Logic’s Test Oscillator to send a ‑18dBFS sine wave or pink noise signal into my hardware to make sure my input levels are appropriate, and a Level meter to monitor the level coming back to the DAW after processing. I find Logic’s level meters invaluable here, as they can be placed anywhere in the signal chain to monitor gain changes. You can drag the meter’s limit line from ‑12 to ‑18 dBFS and treat this as the equivalent of an analogue reference level such as +4dBu.

Many hardware processors have input and output gain meters, and the signal they need to be fed can depend on several factors — which were expertly covered by Matt Houghton and Hugh Robjohns in SOS September 2013: www.soundonsound.com/techniques/gain-staging-your-daw-software

Virtual effects have got much better over the years at modelling the nonlinear characteristics of analogue circuitry, and many respond in almost the same way as their hardware counterparts — as long as you remember that 0dBFS in the digital world is not the same as ‘zero’ in the analogue world! But you don’t need to obsess about getting levels exactly right. Gain staging in Logic can help make processor emulations sound closer to their hardware inspirations, or can be used as a creative effect.

At the end of the signal chain, we are often trying to get the maximum level possible to compete with other productions, but at the recording and mixing stages, careful gain staging and a little thought about the levels going to your plug‑ins can make or break a track.