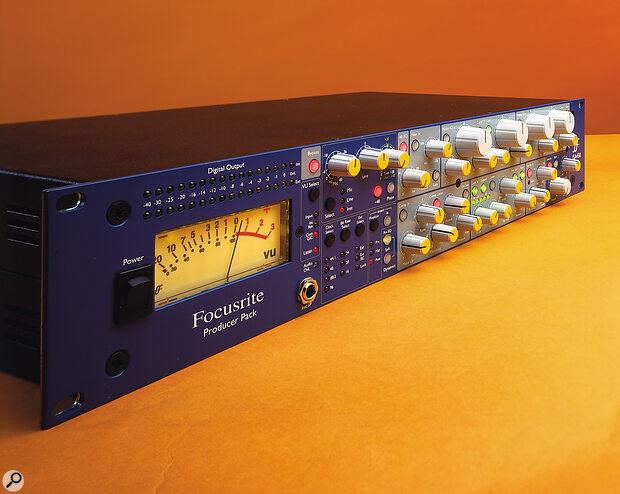 The key to getting the best sound quality from a digital system is to ensure that the signal put out by your preamp or voice channel is hot enough to fill as much of the A‑D converter's dynamic range as possible without clipping. Analogue compression can help by increasing the average level of the signal with respect to its maximum level, meaning that the digital recorder's dynamic range is not wasted in catering for a few high‑level peaks.

Everywhere we see glossy ads for pieces of kit that promise to make our recordings sound better, but the harsh reality is that most of us don't make the best use of what we already own. From a technical standpoint, good recording quality relies on paying attention to gain structure, and that's just as important when using computer‑based soundcard studios as it was when everything was analogue. 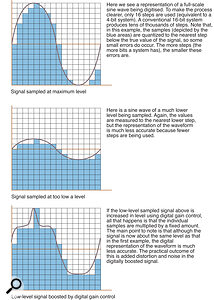 Even in an all‑digital system, the source signal is almost always analogue, and for most of us that means that either a mixer channel or a voice‑channel processor is needed, either to provide A‑D conversion or to make sure that analogue signals feed your soundcard's own A‑D converters at an optimum level. If you're going to get the best results from your setup then it's here that the process of gain management should start — you need to get the right signal arriving at your converters.

If you set the analogue input level to the converters too low, you lose resolution, while if you set it too high, the signal will clip. Resolution refers to the number of discrete steps that make up a digital signal and, as we all know, the more steps there are the more accurate the sampling process. If a signal comes in that is too low in level, it will cover fewer of these steps, and the digital representation of the analogue waveform will be less accurate than if it had used up all the bits. Figure 1 illustrates this point.

Confusingly, some soundcards include digital input‑gain controls, but these must, by definition, act after the signal has been digitised and hence will not recover any lost resolution — once resolution is lost, boosting the signal level in the digital domain will also increase any background noise and distortion in the recorded signal.

Whereas the sound‑quality of an analogue recording depends on the signal level you can get onto tape, digital recording quality is directly related to the signal level you can feed into the A‑D converters. If your system does have a digital gain control, the best strategy is to set it to unity gain, then adjust the analogue source level until the correct meter reading is produced.

A number of soundcard users have noticed that they have to feed a very high analogue signal level into their card's line inputs in order to achieve a sensible reading on the digital meters. This is a deliberate design feature which aims to cope with the mechanics of analogue recording. Analogue tape doesn't have a well‑defined maximum recording level beyond which you shouldn't record. It has a nominal maximum level above which thesound becomes progressively more distorted. In pop music, signals are invariably pushed several dBs 'into the red' to make use of the artificial warmth this can add.

Digital is less forgiving of being driven in this way, because there's no way to digitally represent any higher level once all the bits are turned on, so the signal simply clips. The various committees that decide on such things as recording levels reasoned that digital recorders therefore needed to have greater headroom than analogue systems (typically 12dB to 18dB above the nominal operating level) in order to avoid any possibility of nasty overloads. For that reason, you may find that an analogue preamp needs to be outputting 12dB or so more than you might expect in order to register 0dBFS on a digital meter.

A well‑designed analogue preamp should be able to push out levels of at least +18dBu. However, you may find that the output level loses as much as 6dB if it's used unbalanced — and many budget soundcards have unbalanced inputs. This can leave the preamp struggling pretty hard if it's feeding an input set to a nominal +4dBu, as somewhere in the region of +16dBu will be needed to max out the A‑D converter. What's more, the amount of digital headroom varies from one manufacturer to another (some standards are less standard than we'd like!), so you may find yourself needing to push in even more level.

If you are facing this problem, then see if your soundcard or audio interface has a ‑10dBv input setting. If it does, select this and you'll find your signal level looking rather more healthy. If not, you may need to choose a preamp/voice channel with more drive capability. Hugh Robjohns covered the issues arising from analogue/digital interfacing in more detail in SOS May 2000.

Of course, you may be one of the lucky ones who have audio interfaces with user‑adjustable analogue input and output levels. The Digidesign Pro Tools interface that I use includes this feature, and I tend to set the inputs to their most sensitive settings and the outputs to their lowest settings. I find that this gives a far better match with typical analogue gear.

The first step in setting up your recording chain, then, is to adjust the mic or line amp gain so that signal peaks are close to lighting the preamp's clip LED. The easiest way to do this is to get the clip light flashing on signal peaks, then back the gain off a little until it stops.

Next, set up the compressor (if your preamp has one) so that you're getting somewhere between 5 and 8dB of gain reduction on the loudest sections of music, then adjust the attack and release times to suit the material. Low ratios and soft‑knee settings will provide the smoothest compression, but as all compressors behave differently, the final adjustments must be made by ear.

Finally, set the preamp's analogue output gain so that your loudest signals are just a few dB short of peaking your digital level meters. Your digital meters may be in your preamp, if it has onboard A‑D converters, or they may be within your recording software. Remember, though, that if you're using software level meters then you'll only get the best results if you ensure that any software gain controls are set to unity.

Spending time optimising levels, when you'd really rather be recording, can be tedious, but it will pay off in terms of sound quality, particularly when you're working with 16‑bit soundcards that use budget converters, as these tend to show up more noise and distortion if the signal is under‑recorded. Even with 24‑bit systems, you can't afford to be too lax, although you can allow yourself a few dBs more headroom, as few such systems actually offer a better signal‑to‑noise ratio than a theoretically perfect 18‑bit system. In practice, giving yourself 12dB more headroom results in about the same signal‑to‑noise ratio as when working at maximum level with 16‑bit converters. The bottom line is that paying attention to recording levels is still about the most cost‑effective upgrade you can get!

Some voice channels include analogue compressor stages, which can be very helpful in managing recording levels. A compressor can reduce the dynamic range of a signal and will therefore, if peak output levels are kept the same using its make‑up gain control, effectively boost low‑level signals. However, it's important not to overcompress when recording, as this can't be undone later — use a gentle compression with a ratio of less than 3:1 and then use software plug‑ins to do any further dynamics processing you might require. Add too much compression and you're stuck with it, so try not to apply more than 6 to 8dB of gain reduction at this stage.

You may reasonably ask why, since compressors are available as plug‑ins, we should use voice channels with analogue compressors at all — why not do all the compression using plug‑ins? The answer is that you can do this, but that there are gain‑structure factors to consider. The analogue compressor affects the signal before it hits the input converter, while a compressor plug‑in comes after the converter. By using the analogue compressor pre‑conversion, the dynamic range of the signal can be squeezed so that more bits are being used for more of the time. This in turn leads to less noise and distortion when in the digital domain. In practice, though, if you record an uncompressed signal paying proper attention to levels, adding moderate compression in the digital domain shouldn't cause any problems.