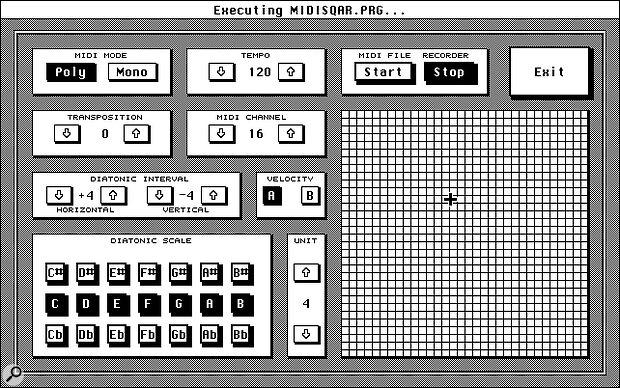 No expertise is required to use David Snow's MIDI Square, but practice will get you a lot closer to perfect!

The Atari goes back to the future with the help of the Elektron SidStation, and Derek Johnson finds out why it's hip to be square...

It's amazing to realise that, in spite of the general shrinkage of the Atari world, there is still plenty of interesting MIDI and music software out there with which many of us may not have had contact. For example, a composer/programmer by the name of David Snow has, over the years, written a number of Atari music software tools, but the first contact I've had with them was quite recently, when they became available as freeware, downloadable from the Internet (sites.netscape.net/timconrardy/index.htm). 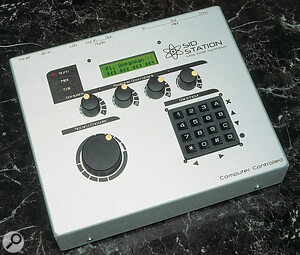 Snow's MIDI Square originally dates from 1993 and offers functions that are similar to, though rather simpler than, those of Laurie Spiegel's Music Mouse, which was reviewed in Atari Notes November 1999.

The software generates MIDI data through the movement of your mouse, which drags a pointer over the square grid in the display while you hold down the left mouse button. Each square on the grid produces, via MIDI, a different four‑note chord consisting of a vertical and horizontal note (biased top to bottom and left to right respectively), plus a user‑selectable harmony note for each. Pressing the right mouse button at the same time as the left calls one of two velocity 'patterns' into play (velocity response varies from soft to loud or loud to soft when the mouse is moved from top to bottom and left to right of the grid).

User control is also provided over generated pitches via a seven‑note 'scale' display, allowing a certain predictability to be given to generated music. The two harmony notes referred to above have a range of plus/minus seven diatonic intervals based on the currently sounding notes, and the only other user controls are plus/minus nine semitone transposition, tempo (20‑240bpm), and the so‑called 'unit'. This last parameter controls the note sub‑division of generated music; quarter, eighth, eighth triplet, 16th, 16th triplet and 32nd note options are available.

While not as powerful as Music Mouse, MIDI Square has one big advantage: unlike MIDI Mouse, its output can be recorded as a MIDI File for further manipulation in a sequencing package. Of course, you can simply record its audio out, and manipulate that if you wish. MIDI Square's results tend to randomness — it doesn't take much to create an out‑of‑control Nancarrow‑like player piano jam, for example — but with care and practice the operator can be fairly sure of producing reasonably consistent results. As with Music Mouse, the more you use the software the better your performances will be. In fact, MIDI Square could be seen as good practice for future Music Mouse use!

There's a time‑honoured tradition of algorithmic composers for the Atari platform, one of which is David Snow's Music Box. This four‑part algorithmic generator started life when David wrote it as a project for a magazine back in 1989, but the freeware version now available shows the positive effects of development since then. The original version produced results based on the random selection of rhythm and note data that was coded into the software; in order to change this data, recoding of the program on the part of the user was in order. For a DIY software project, this was a perfectly reasonable situation. The latest version, though, allows the user to change the rhythms and note data more easily, and provides a comprehensive range of parameters to modify generated tracks.

The program creates a performance based on eight user‑definable four‑note rhythms (sets of rhythm patterns can be saved to and loaded from disk), and a maximum 12‑step row of notes which are entered from a MIDI keyboard. You don't have to use all eight rhythms, by the way, and rhythmic steps can also be rests. Performance generation is further influenced by 10 on‑screen functions (they can't be tweaked during a performance). These are labelled: Rhythm (randomly picks rhythm patterns); Pitch (randomly assigns pitches to the generated rhythm); Copy From/To (clones one track to another); Transpose (responds to global transpose value); Compress/Expand (divides or multiplies note duration values according to global values; Shift (delays start of selected track); Invert (turns pitch intervals upside down), Reverse (reverses note order) and Play.

Like MIDI Square, Music Box is a little simpler than some similar software — for example, it outputs data on MIDI channels 1‑4 only — but it's definitely worth exploring. Best of all, its performances can also be saved as MIDI Files. As with any algorithmic composer, Music Box performs better the more you work with it. Even a session that seems to be going haywire can often result in several bars of usable material — just remember that MIDI File option.

We haven't heard the last of David Snow — I've run out of room this month to tell you about MIDI Master Drummer, a pretty good drum editor/sequencer, so we'll take a quick look at that in Atari Notes next month.

One of the most bizarre tools I've seen recently is a program called Atari ASID. Admittedly, this software is of minority interest, but if you have an Atari and an Elektron SidStation (the unusual Swedish synth based around a Commodore 64 sound chip, which gained a thumbs‑up review in SOS November 1999), and would like to play PSID‑compatible sound files written for the C64, this is the software for you.

There seems to be a strange underground of people who collect sound files from old C64 games, which has resulted in emulators for various platforms; a SidStation under control of this software would be the most authentic way to use these files, though. Atari ASID handles file selection and playback via a CD player‑like front end, and is available for download from the SidStation web site.

Field Music: Building A Track In The Studio
1 month 12 hours ago.