Gate's interface resembles Compressor's in Activity View mode; the red horizontal lines show the gate‑on (lower) and gate‑off (upper) thresholds and the white graph shows the output‑level. The orange bar on the right shows the current amount of gating. I've inserted the waveform of Gate's output at the top of the graphic display to illustrate the typical use for gating: suppressing noise between phrases in a speech clip.

We get creative with Live's often overlooked Gate processor.

Live's Gate audio effect is loaded with creative potential, and is the one dynamics processor we haven't yet covered in this column. Gates are traditionally used to suppress (close the gate on) low-level noise, hum and bleed‑through from other sources when the intended audio pauses — think of a radio announcer battling background noise. You'll find a pair of excellent masterclasses on gating by Paul White with Mike Senior in the April and May 2001 issues of SOS. You'll also find full coverage of Live's other dynamics processors in the May 2012 and July 2014 Live columns.

The Gate & The Good

While compression and limiting act when the audio level rises above a threshold, gating acts when the audio level falls below a threshold. In addition to Threshold, both Gate and Compressor have Attack and Release controls, but whereas for compression they control the rate of rise and fall (dB per second), for gating, they have their standard envelope‑like meaning: Attack refers to the time it takes for the signal to reach full level, and Release refers to the time it takes to reach the minimum level as set by Gate's Floor control. The Floor control is handy, for example, when you want to use Gate to lower the accompaniment behind a singer without cutting it off completely (see 'The Flip Side' below). Gate has an additional envelope‑like control called Hold that sets the minimum time the gate stays closed, which helps to prevent stuttering. Return is another anti‑stuttering Gate control; it moves the gate‑on threshold below the gate‑off threshold. Gate does not have Compressor's Ratio, Knee, Dry/Wet or output‑level settings because they are superfluous for gating, but it does offer side‑chain and EQ controls, and they work exactly like Compressor's.

Gate's Release setting lets you fade out rather than chop off the sound when its level falls below the threshold. You can use this to tailor the natural release of instruments like a crash cymbal or strummed guitar to suit the rest of the music. This technique also works well for fixing clips recorded with too much reverb. Here the critical controls are Threshold and Release; Gate's default settings are usually suitable for the other controls. Start by lowering the threshold until it captures the part of the tail you want and then raise the release to increase the tail fade-out time. If you can't get the tail exactly right, try increasing the Hold or Floor, or both. 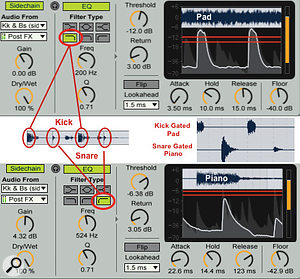 A kick‑and‑snare pattern is used as the side‑chain input to separately gate pad (top) and piano‑chord (bottom) clips. Low‑pass EQ restricts the pad gating to the kicks and high‑pass EQ restricts the piano‑chord gating to the snare. Note that the red Threshold and Return lines apply to the EQ'd side‑chain audio, not the audio being gated. You can see the side‑chain waveform displayed faintly in the background, and clicking the Side‑chain Listen button, between the Side‑chain and EQ switches, highlights it in blue (not shown) and lets you hear it in order to help you set the Threshold and Return levels.You can use a similar technique to sculpt the dynamics of sustained sounds such as pads, ambient recordings and held chords to match rhythmic patterns in a percussion track. To do that, insert Gate on the track playing the sustained sound (a pad, for instance) and point Gate's side‑chain input (Audio From) to the percussion track. Now, when each percussive hit dies out, the pad will also fade out or be chopped off, as dictated by Gate's Release setting. As above, Hold and Floor are useful for fine tuning. Gate's Side‑chain Listen button is very helpful in setting the threshold, and the EQ section will help you focus on the intended events in complex percussion clips. For example, use low‑pass EQ to emphasise kick-drum hits or high‑pass EQ to emphasise snare hits for gating. You can expand on this technique by inserting gates on separate sustained‑sound tracks and then feeding their side‑chains from the same percussion track. For example, try using different EQ settings for each Gate in order to gate a pad with the kick while gating chords with the snare.

Let's start with ducking: lowering the level of the background accompaniment to make the lead sound (typically a voice-over or lead vocal) stand out. Side‑chain compression is often used for ducking, with the vocal feeding the side‑chain of a compressor processing the background, so when the vocal comes in, the background is compressed. In Flip mode, Gate accomplishes the same thing with controls better suited to the task. In particular, Floor lets you easily set the level of the accompaniment behind the lead.

Here an announcer's voice-over narration is used as the side‑chain input for Gate to duck background music. Gate is operating in Flip mode and its Floor setting controls the level of the ducked background music.When you want to really flip out, create an Audio Effect rack with two chains, one containing a Gate effect in normal mode and the other containing a Gate effect in Flip mode. As long as the two Gate effects have the same settings and Floor is set to minimum (‑inf dB), the output of the two chains will be complimentary and their combined output (the rack's output) will equal the input. You can check that out by creating a third chain in the rack holding a Utility effect with its Phz‑L and Phz‑R buttons turned on. The Utility chain will then cancel the combined output of the Gate effect chains and you'll hear nothing. When the settings of the Gate effects in the other two chains differ, you'll hear what's common to both their outputs.

To explore gate‑and‑flip effects, create the rack just described and map rack Macro knobs to one Gate's Threshold, Return, Attack, Hold, Release and Floor. Next map these Macro knobs to the same controls on the other Gate. You can now use the chain volumes to rebalance the gated and flipped audio and use the chain pans to alter the stereo image. 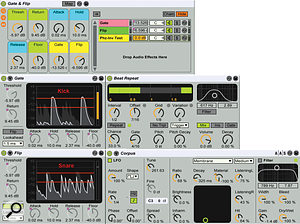 In this example of gate‑and‑flip processing, the shared Threshold setting for the two Gate effects gates out everything but the loudest kick‑drum hits. Those are heard in the chain labelled 'Gate' while everything else is heard in the chain labelled 'Flip'. The Chain Volume settings (yellow Macro knobs) adjust the mix of the two. A Beat Repeat effect is applied to the loud kick‑drum hits, and its Chance and Variation controls ensure that extra kicks at eighth‑note or eighth‑note‑triplet rates are generated about half the time. That adds a little variation to the prominent kicks. Everything else is processed by a Corpus effect, which results in a completely different timbre for the snare and lower‑level kicks. Many Corpus presets work well for this.As a next step, try adding other effects to each chain. If a chain has some percussive attacks, Beat Repeat or any of Live's delays are good choices because some of the repeats they generate will carry over when the other chain is playing. If the source is a percussion track, Corpus, Frequency Shifter, Resonators or any other tone‑altering effect will give either chain an entirely different sound.

Used sparingly — with automation to bring the effect in and out, for example — you can get away with some radical changes. Try applying some tone colouring (phasing, flanging, chorus and so on) after other effects to either or both chains. Keep in mind that, because Gate is a dynamics processor, the source audio needs to have some dynamic change for any of these ideas to be effective. Finally, try unmapping some of the rack's Macro knobs and using different settings for the two Gate effects.