Getting More Bass In Your Mix

Multi‑band compression and limiting, as is available on specialised mastering processors like the Dbx Quantum, can be very useful in firming up the bass in your track.

Do you want your bass end to sound bigger, fatter, louder and meaner? Paul White explores some of the options.

This article was inspired by a reader who emailed me from halfway round the world to find out ways to add more bass to his mixes. He said that no matter what he did, the studio down the road always got even more bass! This is a common problem, and one which some people approach simply by buying all the classic bass synths. However, having some appreciation for what makes a good bass sound helps enormously when it comes to editing or processing your own sounds, whatever type of music you're making.

One of the first things to realise is that not every listener has great big studio‑style monitors at home, so there are two ways to go — you can either make something really deep and big that will only work over a full‑range club PA system, or you can use various tricks and skills to create something that gives the impression of depth on typical domestic speakers. If you want something that will work on both, you must accept that it will be a compromise — it's important to note that you can't use the same approach in both cases. For example, cathedral organs produce bass notes down to 20Hz, or even lower, that can shake your whole body when reproduced through a full‑range, high‑power system, but if you try to replay these through a typical music system, you're unlikely to hear very much at all as most of the energy falls below the lowest frequency the speaker can generate. However, very low frequencies still use up system headroom, which means that they will reduce the maximum level at which those sounds you can hear on a domestic system can be played back.

In practical terms, this means that if you want big‑sounding bass that works in a domestic listening environment, it's pretty pointless going much below 40Hz, as most hi‑fi systems don't even go down that far. In fact most smaller systems start to roll off at 80Hz or even higher, so you need to make sure there's plenty of energy in the 70 to 90Hz range in order for the bass to work on pretty much all domestic systems.

Synth waveforms that are close to sine or triangle waves produce a very strong fundamental with few harmonics, so even if you have large speakers, you may end up with a bass you can feel but not actually hear very loudly. There are several things you can you do if you want bass you can both feel and hear:

...you can either make something really deep and big that will only work over a full‑range club PA system, or you can use various tricks and skills to create something that gives the impression of depth on typical domestic speakers.

Replaying the bass track via a guitar amp, miking it, then adding the miked signal to the untreated DI'd signal can also help make the sound 'bigger', as the sound of a real loudspeaker cabinet often has musically useful resonances that a simulation lacks.

• Use a processor such as the Dbx 120XP 'boom box' to add real subharmonics to an existing bass sound. Use this machine carefully as some of the bass frequencies generated are seismically significant! This technique is probably best reserved for mixes designed for club rather than domestic replay. 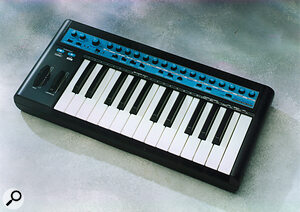 If your synth rig lacks a suitable bass provider, you could invest in something like Novation's BassStation.

What can you do if the bass sound is generally OK, but you still can't get it loud enough relative to the rest of the mix without causing clipping? You could always turn down the rest of the mix, but there are things you can do to control the peak levels of your bass sound using processing. Perceived loudness is dependent on the harmonic structure of the waveform (including any subsequent filtering), the shape of the volume envelope applied to the note and to any dynamically changing harmonic content, such as that caused by an envelope controlled filter. It is therefore possible to change the perceived level of a bass sound by adjusting some or all of these parameters, and in the case of synthesized sounds, much of the adjustment can be done at patch level. Sounds such as electric bass guitar, on the other hand, need to be processed using compressors and equalisers to achieve a similar result.

Much can be achieved at the mastering stage, and a professional mastering engineer will be able to reduce the level of excess deep bass without affecting the way the mix will sound over a typical hi‑fi. Compression (particularly multi‑band systems), dynamic EQ and more selective parametric equalisation may be brought to bear during mastering, to adjust the relative spectral balance without messing up the mix itself. As recent reviews have shown, you can undertake this type of work at home with a reasonable degree of success by using one of the newer all‑in‑one mastering processors from TC Electronic, Drawmer or Dbx, but you do need good monitors (in a suitable room) and good ears. You can also do a reasonable job using an enhancer that offers both high and low‑end control; it's no secret that I still think the SPL Vitalizer is one of the best tools for doing this job affordably.

The human ear can be fooled into perceiving a fundamental that is completely absent if the higher harmonics are present in the correct proportions — that's why you can still get an impression of bass from a small transistor radio...

If you are using one of the Vitalizer models, note that the bass control has a centre‑off position and that you can move in either direction from there to produce a soft or hard bass enhancement. The soft bass setting brings up a lot of very low‑frequency energy, so may be best for mixes that are either bass‑light to start with or that need to sound massive in a club. The tight bass setting has less depth, but provides tighter control and more definition, which may sometimes work better in a domestic environment.

As you can see, there's a lot more to getting a big bass sound than simply choosing a low‑pitched bass sound and then turning it up loud, especially when you're mixing for replay over a domestic hi‑fi system. The choice of the source sound, its volume envelope, compression and equalisation/filtering all play a part, but having some idea of the psychoacoustics of bass perception helps. The human ear can be fooled into perceiving a fundamental that is completely absent if the higher harmonics are present in the correct proportions — that's why you can still get an impression of bass from a small transistor radio — but if you want bass you can feel over a large club system, the fundamental needs to be present as well as the harmonics. It is important, therefore, that if you're mixing with clubs in mind, you either have a full‑range monitoring system or access to a club sound system to check out your mixes. If you rely on nearfield monitors, you'll know what to expect on a domestic hi‑fi, but you'll be completely in the dark as to what the bass end will do over a club system. Getting the best results will involve a degree of experimentation, especially if you want a compromise mix that will sound good in both clubs and homes, but experimentation is a good thing as it drives progress and makes it more likely that you will come up with a distinctive sound of your own.

A Place for Bass

When mixing a track, keep in mind that bass sounds should be panned centrally so that the low‑end load is shared by both loudspeakers. It's also wise to avoid dramatic stereo effect treatments on bass sounds as these can sometimes introduce phase differences that reduce the overall low‑end power. Equally, phase differences at low frequencies can cause severe cutting problems if you happen to be mixing for vinyl rather than CD.

Another point to consider is the psychoacoustic effect of playback level, and to compound this, some smaller studio monitors don't start to work effectively at low frequencies until you crank the monitoring level up. If you want your mix to sound big at low listening levels on smaller speakers, bringing down the level of the lower mid‑range can help — the familiar smile curve on a graphic equaliser is often used to pull down the 200 to 300Hz region. On the other hand, if the intended listening level is high, you're better off mixing fairly loudly and not applying any special additional EQ. Be careful not to monitor too loudly for too long though — you need your hearing to last as long as possible!

Kick drum sounds feature fairly strongly in much of today's music, and most of the techniques that have been discussed in the context of bass instrument sounds also work with bass drums. There are lots of effective‑sounding samples out there, but layering an electronic drum sample with an acoustic drum can add definition to the sound without losing impact. You can also make a kick drum sound a lot louder by limiting it and/or adding mild distortion.