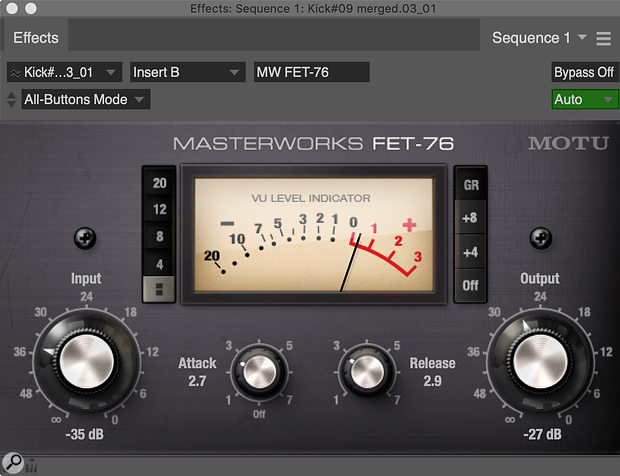 The MW FET‑76 emulates the performance and controls of the hardware 1176.

DP's MasterWorks (MW) plug-in collection is comprised of five dynamics processors and an equaliser. All are deep, powerful and flexible, and provide you with high-quality tools for mixing and mastering. In Part 1 of this two-part series, we'll look at three of the processors: MW FET‑76, MW Leveler and MW Compressor.

The original UREI 1176 is one of the most celebrated hardware compressors of all time. The MW FET‑76 plug-in provides an accurate emulation of the 1176LN.

From a control standpoint, the MW FET‑76 is almost identical to the original. Both have a fixed threshold, and you use the input gain control to raise the incoming signal and trigger the compression. The higher the input signal, the more compression.

Like the original, the MW FET‑76 has four Ratio buttons — 4:1, 8:1, 12:1 and 20:1 — which can be selected one at a time or in combination. The FET‑76 differs slightly from the original unit in the method for combining the ratio buttons. It features an extra button called Compression Combination, which needs to be activated before you can engage multiple ratios.

Just like on the original hardware, the attack and release controls operate in reverse compared to most other compressors, so the settings get faster as you turn the knobs counterclockwise. If you adjust the attack knob on the FET‑76 fully counterclockwise to its off position, it turns the compression off completely, but your signal still passes through the modelled circuitry and benefits from some analogue-style coloration. (This can also be achieved by unpressing all the ratio buttons.)

The FET‑76 sounds and performs quite similarly to the original. Its response is extremely fast and therefore useful for controlling transients. Like the hardware unit, it adds some saturation to the signal, and it imparts its tonal signature on everything it's used on.

One source it's particularly flattering to is drums, whether on a bus or individual track such as a snare. To dial in a 'crushed' drum sound, use the Compression Combination button to turn on all the ratio buttons (a setting known as 'all buttons in' on the original). Adjust the attack and release knobs to about half way, and experiment with the input and output controls.

The FET‑76 is also quite effective on guitars, basses, vocals and almost any source where a little added character is desired along with dynamics control.

The MasterWorks Leveler is also an emulation of a vintage compressor. It emulates the famed Teletronix LA‑2A. The LA‑2A (LA stands for Leveling Amplifier) was the quintessential optical compressor and had a tube output stage, which further warmed up its sound. The combination of its tone and its prodigious ability to even out dynamics has earned the LA‑2A classic status. The MasterWorks Leveler models the circuitry of the original to produce similar sound and characteristics.

One of the sources on which the hardware LA‑2A really shines is vocals, and the MW Leveler is perfect for that application, too.

An optical compressor takes a copy of the incoming signal, turns it into light and sends it through a photoresistor that triggers the compression. The louder the input signal, the brighter the light and the more compression. Optical compressors have a slower response than VCA or FET compressors, so aren't as useful for constraining transients. That said, they can still sound great on percussive sources like drums in many situations because of the tonal smoothness they add. 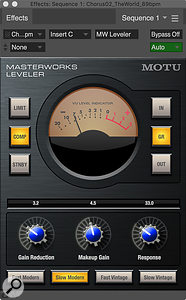 The MW Leveler offers a close sonic emulation of the LA‑2A, and its expanded control set helps you dial in various vintage characteristics.One of the sources on which the hardware LA‑2A really shines is vocals, and the MW Leveler is perfect for that application, too. It will comprehensively reign in the dynamics of the track while at the same time adding a warm sheen.

MOTU equipped the MW Leveler with several extra controls that weren't on the hardware versions. The four Opto-Coupler buttons at the bottom emulate different iterations of the LA‑2A hardware. The terms 'Fast' and 'Slow' on those buttons indicate their attack characteristics. The Response knob also affects attack time.

MW Leveler's circuit emulation of the original is so accurate that it mimics the behaviour of the photoresistor cell in the detector of the hardware unit, which had to 'wake up' for a moment to reach its optimal state when first turned on. In addition, the cell will behave differently depending on the characteristics of the audio signal you run through it while it is warming up, achieving a response that is truly unique to that audio material.

Because the plug-in acts the same way, MOTU included a Standby button. You can use it to turn off the processing of MW Leveler without affecting the readiness of the emulated cell, which is not the case if you use DP's standard plug-in bypass button. If you want to compare the sound of a track with and without the MW Leveler on, use Standby to turn the unit off and on, and you'll get the fully 'warmed up' response instantly upon activating the plug-in. 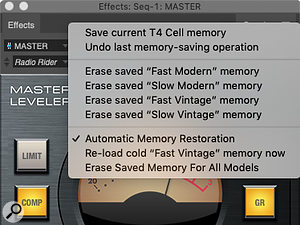 Click the MW Leveler's meter to access a well-equipped menu for saving and managing cell states for the four different variations of the LA‑2A emulation (Vintage/Modern/Fast/Slow).Clicking on MW Leveler's meter opens a dialogue box for saving and recalling the cell state for the plug-ins' Vintage Slow and Fast and Modern Slow and Fast modes. Since the cell state can be signal dependent, you can truly 'dial in' its sound for audio material in a specific track. The commands in this menu allow you to preserve and instantly restore that same dialed-in sound. For example, if you achieve results with a certain vocal track that you really like, you can save that cell state and then apply it to other vocal tracks, without going through the warm–up process for the other tracks.

MW Compressor is a multiband dynamics processor that's useful both in mixing and mastering because it allows you to split the audio into up to three user-definable frequency bands — as delineated by two adjustable crossover frequencies — and process each one separately. It's essentially three compressors in one. 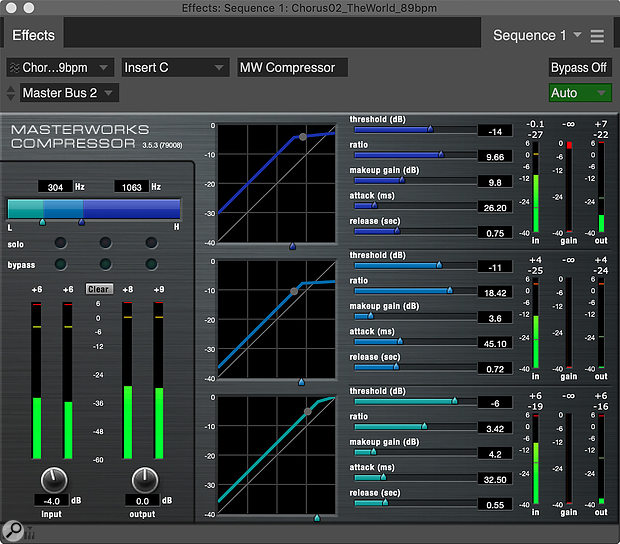 With three user-selectable bands, MW Compressor gives you the ability to apply different amounts of compression to low, mid and high frequencies.

The ability to target the compression based on frequency can be very useful. Let's say you're compressing a stereo drum track where the snare is a little loud. You want to attenuate the snare more than the kick, while affecting the cymbals as little as possible to avoid making them sound 'washy'. You can set the low zone to focus more on the kick's frequency range and the high zone on the cymbals'. Then use the middle zone's threshold and ratio controls so that you're getting more attenuation on the snare.

Setting the frequency bands is made easy by using the solo buttons, which let you listen to a band in isolation. The bypass feature, which allows you to turn off the compression to any of the zones, is also quite handy.

MW Compressor's ability to target compression to specific frequency regions makes it well-suited as a master bus compressor or on instrument or vocal busses. It would also be a boon in a mastering situation when you're trying to alter the characteristics of a particular source within a stereo mix with as little impact on the rest of the frequencies as possible.

In Part 2 of this Digital Performer workshop, we'll look at the other three members of the MasterWorks family: MW Limiter, MW Gate and MW Equalizer.