How To Create Your Own iPad/iPhone App?

Last month we discussed what the launch of the much‑vaunted iPad means for musicians — but just how hard is it to create your very own iPad and iPhone apps? We look at an interesting approach...

AppOmator allows you to create and test your own iPhone apps without detailed knowledge of app development and back-end coding.

In last month's issue, we highlighted the impending launch of the iPad and discussed its potential uses for musicians. This month, we'll consider how you could create content for the iPhone and iPad. Most of us haven't got time to get into 'app' development and serious back‑end coding, and the majority probably wouldn't want to pay the $99 individual user subscription for the latest Software Development Kit, just to find out that apps aren't a suitable vehicle for the delivery of their creative output. Is there an alternative?

If you haven't considered it before, these Apple devices could be a great platform for publishing and publicising your 'content', be it your latest compositions, remixes or press releases. The platform gives you — as a band, label or studio, for example — a unique portal to your web site, a distribution mechanism for your news and a handy link to your blog's RSS feed. MacProVideo, run by Martin Sitter, author of several of the original Apple Training Series books for Logic Pro and SoundTrack Pro, have released an application (as opposed to an app) that gives you a friendly front end for building apps for the iPhone and iPad, bypassing the need for you to sign up as a developer.

AppOmator is specifically targeted at the requirements of musicians, and at the time of writing, the beta is a free download at www.appomator.com. It lets you build your app by dragging and dropping images, audio and video, and enables you to test the result by simulating it running on the iPhone. I was very quickly able to build a simple app with opening splash page, menus, and a table of contents linking to audio and video tracks, partly due to the fact that very helpful tutorial videos are available on the appOmator site.

Of course, the ability to actually compress the app to iPhone format and upload to the App Store, via appOmator's servers, is a premium part of the service (not available at the time of writing), the suggested pricing for which is $15 a month. This is not an inconsiderable sum but a rough calculation — assuming you would make 55 percent of any charge you make for the app (after Apple take their 30 percent and appOmator take 15 percent for transaction fees and management costs) — indicates that you would need to sell roughly 30 apps per month at 99 cents each to cover your costs. If you'd prefer to self‑publish (requiring a $99 iPhone developer account), the ability to download your app from appOmator's servers, rather than have them manage your app for the above monthly sum, is set to cost $200. This does seem steep given that your app is effectively 'locked' into appOmator's servers unless you choose one of these pricing options, but it is actually highly competitive when compared with the likes of Mobile Roadie (a competitor service priced at $499 for setup with a $29 per month management fee), and the free download of the beta software does mean you are able to test your app-making abilities before parting with any cash. So now is the right time to download the free beta and find out if your content is going to be appropriate for publishing to mobile platforms. 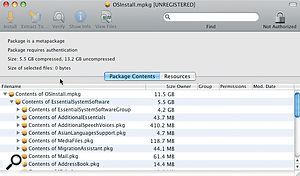 Pacifist, by CharlesSoft, displays the contents of the operating system and allows you to extract component files.

I never thought I'd be extolling the virtues of what is essentially a combination of very boring components but, having recently taken delivery of a 2TB Apple Time Capsule, I have to report that I now find it difficult to imagine life without one. The device is a wireless hard drive and base station that works with your Apple Time Machine utility to create backups. Previously a chore in my daily routine, I now find backing up to be a background task. I currently have two Macs using the Time Capsule, the first with one volume and 130GB of data, and the second with four volumes and 223GB of data. After a couple of months of steady use, the incremental backups created by Time Machine have stored 403GB of data on the Time Capsule.

At $499 for the 2TB model, Apple's Time Capsule is, of course, relatively expensive considering the cost of the component parts and you should always have a second line of defence in case it lets you down. Optical storage is reliable but requires a lot of effort in this increasingly automated world. Something like iDrive is one alternative, offering a 'cloud' storage service, which is essentially a system of externally storing data with a third party, accessed via the Internet. They offer 2GB of 'cloud' storage for free, with 150GB available for $4.95 a month as the first rung on the 'paid‑for' ladder. Installing the application, downloadable from www.idrive.com, places an icon in your menu bar, allowing iDrive to be configured to automatically back up the selected data at specified intervals.

Apple's MobileMe, which ought to provide simple automated backup services, disappoints in this respect. It should be simply a matter of installing the Backup application (downloadable from http://support.apple.com/downloads/Backup_3_1_2), but this has not been updated since 2007, and user feedback suggests a file-size limitation of about 90‑100MB using this method. At $99 per year, MobileMe would measure up to other subscription services, especially when you take into account the other services it offers, but the best course of action — if you wish to access the 20GB of storage space on offer — is to use an FTP client, such as Transmit, that supports the WebDav protocol, although you do then lose the benefits of automatic backup.