How top engineers use their most important effect By Mike Senior

One question that I've frequently been asked by SOS readers is how many different reverbs they should use on their mix. This is not an easy question to answer, because different mix engineers take quite different approaches. The most straightforward, though, is probably to have two or three global reverbs set up as send effects, to which you feed signals from the different tracks so that you get the impression they're all in the same kind of acoustic space. "A lot of times people add so many different reverbs that they compete with each other, and it sounds incongruous," comments Mike Clink. "It doesn't seem to gel together. I think reverb has to be the glue that makes everything sound like it was recorded in one setting, so I'll feed multiple instruments into one or two reverbs." 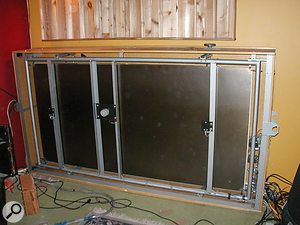 For articifial reverb, hardware remains a popular choice amongst top producers — from classic digital reverb units such as the Lexicon PCM80 and 90( above left) to vintage mechanical units including spring reverbs (above) and the EMT Plate 140 (left). Of course, the next question is how each of those reverbs should be set up. Irrespective of the specific gear you use, the key thing that the pros tend to be looking for is contrast, so that each reverb offers different useful characteristics. Reverb time is, of course, one important variable, as in this example from the age of analogue reverbs. "The way I would normally configure the [three EMT plates]... was to have one set very short, one set medium, and one set somewhat longer," describes John Fry. "We frequently set up our [three] chambers that way, too."

Elliott Scheiner and Chuck Ainlay go for the global reverbs approach too, but supplement these in certain circumstances. Scheiner: "I'll use other reverbs for more specific things — those things that weren't tracked at the same time or need to have some other kind of thing happening." Says Ainlay, "There are three or four reverbs that will work for the general mix. And then I'll have specific reverbs for specific instruments, like the [gated Lexicon PCM70] will be on percussion instruments; I may also use inverse reverbs and things like that, small room sounds."

An alternative approach is to have individual reverbs for separate instruments, a tactic once the preserve of the big studios, but which the rise of the plug-in has now brought within reach of small studios too. "Each instrument will have its own effect," explains Eddie Kramer. "I'll use eight or 10 effects, multiple layers of reverbs. They're subtle, some of them are absolutely down in level, but usually very short now."

Taking the approach to something of an extreme, though, is Jon Gass, who uses them as much for their tonal qualities as their spatial ones: "I might use 10 or 15 different reverb delays in the mix, but I don't really use 'long hall' or any of those types of reverbs. They're all either really short or a chorus, and I use them to create space without destroying the track with EQ. That would be the last thing I'd do. I'd rather create a little vibe, and that's not down to training but just a musical way of mixing."

I'm always surprised how few SOS readers take the time to EQ their reverb returns, as this is one of the most common processing tips offered in producer interviews. There are two main reasons given for this, the first of which is summed up nicely by Phil Tan: "Sometimes you have to carve out a space for a reverb with EQ and by shaping the reverb characteristics — attack, release time, length, and so on — so that it does not interfere with the other frequencies in the song."

The other reason why engineers seem to be EQ'ing their reverbs is to deal with the vagaries of more characterful options such as springs and plates. "One of the hardest things to teach somebody is to listen to the device itself," complains Phil Ramone. "Take out the source and listen to the device. You'd be amazed how crummy some of these things sound! They flange, they phase, there's cancellation all over the place." All's not lost, however. "Sometimes the weirdest things — like old spring reverbs — can sound really phenomenal in a mix." reveals Jack Douglas. "By itself, it's going to sound awful... but use it right — colour it a little bit, filter it, EQ it — and it's going to sound cool in your mix." And how do you know where to EQ? Manny Marroquin shares another tip: "I listen for the frequency where the reverb matches the input signal and tweak that."

The most widely discussed reverb parameter is certainly the decay time, but pre-delay coasts easily into second place — engineers were pre-delaying chamber reverbs using tape delay a half a century ago, and the technique comes up in interviews with such legends as Eddie Kramer, Alan Parsons and Tony Visconti. A good reason for using pre-delay is explained by Glen Ballard: "I'm always interested in hearing the vocalist's words... so I like to have the dry signal a little bit clear of the effect, just for the articulation. If it's a really slow song, say a ballad, then the pre-delay will probably be longer." In other cases engineers are using pre-delay to tempo-sync the onset of the reverb envelope, supporting the track's rhythm. "I don't normally pay a lot of attention to exact reverb time," comments Phil Tan. "It's only with delays or reverb pre-delays that you want them exactly in time."

Where possible, almost everyone returns the outputs of stereo reverb devices to the mix in stereo, but this is by no means the only option out there. Elliott Scheiner: "I've always felt that part of the charm of old records is that you could hear the reverbs return to the same place as the instrument. Like if I have an electric guitar on the left, the reverb returns to the left as well, so all the sound comes from one place. When I mixed records in the '70s... I would use three 140 plates: one I'd dedicate to the left, one to the right, and one to the centre... We decided to go for a 140 plate sound on [Steely Dan's] Everything Must Go, and I did pretty much the same thing."

Joe Chiccarelli also describes panning mono reverb returns to match the dry source tracks when he was mixing The White Stripes' Icky Thump, whereas Lou Bradley took the opposite approach for Charlie Rich's 'The Most Beautiful Girl', panning the plate reverb on Pete Drake's slide guitar part to the opposite side of the stereo field to create a nice little production hook.

Even if you follow the herd and go for straight stereo reverbs, Phil Ramone still has a few words of warning: "You really should listen to [the reverb] in mono to make sure that what you're hearing is what you get. That's why a lot of television shows get so screwed up. They come in with these great effects, but when they check in mono, half the signal goes away, or half the reverb goes away."

The final hot tip that comes up time and again in interviews with producers is that you should use fader rides to adjust the reverb levels during the track, and there's no excuse for not experimenting with this now that mixer automation facilities are so widely available. For a start, Al Stone points out that having reverb on all the time reduces its impact: "Rather than have a reverb on throughout a track, I'd rather flick it on and off throughout a song in two or three places. That's what an effect should be. If it's on all the time it cancels itself out."

Professionals have often regarded plug-ins as the poor relations of hardware reverb, but with good quality modelling plug-ins such as UAD's Plate 140 and convolution reverbs such as Audioease's Altiverb now on the market, this situation is begining to change.By the same token, you can increase the drama of selected song sections if you save a separate reverb just for them. "I'll pick the spots [for reverb]", say Tony Maserati, "like on a very emotional high point of a song." Alternatively, momentarily switching an existing reverb off can also catch the listener's ear, especially if the source in question is your lead vocal. "One thing I like to do... is to use a small room on something, and then once the listener is aware of the sound, just cut it out, then bring it back in again," suggests John Leckie.

The other main reason top engineers seem to be riding their effects is to provide that elusive feeling of momentum that drives a mix along, and really lets you know when the chorus has arrived. Tom Elmhirst used this approach on the drums for Amy Winehouse's 'Rehab', for example: "I had the drum spring on a separate fader and was riding it. You can hear on the track that the drum track is dryer in the verses, while the reverb comes right up in the chorus and the bridge."

Nowhere is this technique more useful than when the mix relies heavily on loops. "When I have a loop like that without change," reveals Mark Endert "the way I can achieve contour is by changing the amounts of effects. So at the beginning [of Maroon 5's 'Makes Me Wonder'] there are minimal effects on the guitar loop, then when it hits the first verse there are more delays, when it hits the chorus there is chorusing and delay and reverb on it... In the verses it's more like a 16th slap feel, and when it gets to the choruses, I harmonised with an AMS 1580S, pitch-changing and fattening the guitars. You can get a lot of contour out of a track that lacks dynamics just by changing the acoustic space around it."

Another situation where automation can be handy is where there are problems to be solved. John Leckie: "Whenever there's a little sibilance or a little something that ends with a sharp attack which sets the reverb off, just trim the effect send during the mix to where you can't hear it. You've still got the bigness, but it never sounds reverby."

It should be pretty clear by now that digital reverb is only one of the tools at your disposal for creating space in your own music, and that there is much to be gained from picking up some of what you need while tracking. Even if you only have access to digital reverb, I hope that you've found some useful tricks to improve your mixes nonetheless, as well as getting more use out of the spring and plate patches in your plug-in's preset library.

Ex-SOS Reviews Editor and regular contributor Mike Senior has worked professionally with artists such as the Charlatans, Nigel Kennedy, Therapy and Wet Wet Wet. He now runs Cambridge Music Technology, delivering courses based on the studio techniques of the world's most famous producers.