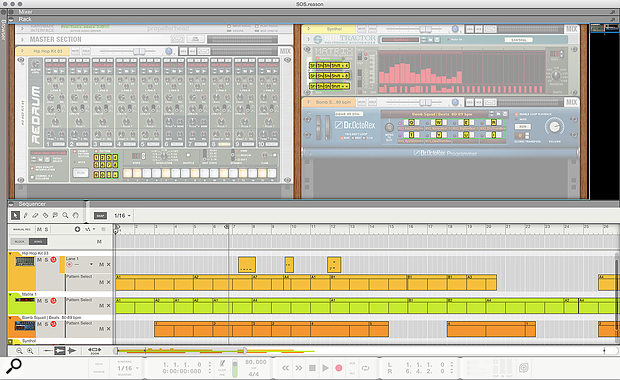 Cut the cord and make music with just your laptop and Reason.

There were many factors that first got me hooked on Reason, but undoubtedly the main appeal was being able to produce synth-based songs on my laptop with no MIDI hardware connected. At the time I didn’t have portable keyboards or pads, and was moving around quite a bit with work. In any case, even if there was room to set up MIDI gear on a train or plane folding table I’d feel conspicuously douchey doing it!

Reason has several features that make it perfectly suited to working without traditional input devices. The Redrum drum machine has it’s own pattern sequencer, the Matrix device can be used to sequence any other instrument, and Dr OctoRex takes care of loop sequencing. And then there’s Keyboard Control mode, which allows you to map computer keys to many of Reason’s device and mixer controls. Reason also now has the On-screen Piano Keys windows allowing the computer keys to stand in for MIDI keys or pads when necessary.

A few issues ago we looked at beat-programming workflow, mostly using real-time recording with the Kong drum machine. However, for many the mainstay of Reason production is still the Redrum device, using its onboard step-sequencer to program patterns — a process which requires no MIDI input. Redrum’s sequencer probably doesn’t need explanation, I’m sure most SOS readers shared a knowing smile when Beastie Boys rapped, “I got kicks on the 1, 7, and 11; snares on the 5 and 13”. As a quick aside, though, my top Redrum programming tips are to use the standard copy and paste shortcuts when Redrum is focused to duplicate patterns between the memory slots, and use Shift or Alt when adding triggers to vary dynamics.

The Matrix sequencer has an almost identical set of features and controls to Redrum; the differences being that the Matrix generates note values as well as gate triggers, can tie notes (Shift key), and there’s a ‘curve’ layer for generating pure CV outputs. For the first couple of years I used Reason I pretty much did everything with the Matrix device, working in a very old-school modular synth fashion. Again it wasn’t for any particular aesthetic reason, but because I only had my laptop and the Piano Keys window hadn’t been added yet. However, it’s really fun working like this and yields interesting results that you probably wouldn’t get playing stuff in from a keyboard.

Redrum and the Matrix can both store up to 32 different patterns or variations, with the memory slots divided into four banks of eight. As you probably know, these are recalled from a cluster of buttons on the devices, and these pattern changes can be recorded or drawn into the main Sequencer to create a song structure. Again this is all perfectly doable with the mouse/trackpad, but really benefits from our next topic: Keyboard Control.

Reason’s Keyboard Control feature allows you to map keys to Rack device controls and mixer parameters. As an example of this we’ll look at how to recall Redrum and Matrix patterns and Dr OctoRex loops from the keyboard. With this set up you can quickly ‘perform’ songs by recalling patterns and loops, and record what you’re doing into the main Sequencer.

At the top of the Options Menu you’ll see Enable Keyboard Control, and Keyboard Control Edit Mode. The first needs to be ticked for keyboard control to work, the second puts you into a global mapping mode that shows all assignments and available controls (see screen 1). There are two ways to map keys to controls. The first is to enter Keyboard Control Edit Mode, then double-click any control that has a yellow arrow over it. A rotating square will appear over the control indicating that it is in Learn mode. You can then press the key you wish to assign, or a combination of Shift and a key. If the key has a default function in Reason, this shortcut will be disabled in favour of your new assignment while Keyboard Control mode is active. If the key has already been manually assigned to something else you’ll get a warning message. 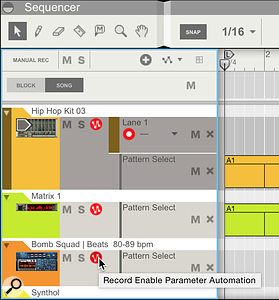 2: To capture pattern/loop changes on multiple devices arm Automation recording on each track.The second method for assigning keys is simply to right-click a control and choose Edit Keyboard Control Mapping... This is sometimes preferable, because it’s quicker for single assignments, and also because in the global mode it can be hard to click controls that are close together as their labels can overlap. Either way, once your assignment is made the key will activate the mapped control. For switches or buttons this is the same as clicking them. For knobs, sliders and faders the key will toggle the control between its minimum and maximum values.

Now let’s put the two ideas together into a workflow for fleshing out a song arrangement on the fly. The main picture shows a template song I use for working like this. On the Redrum I’ve mapped the eight pattern select buttons to the 1-8 numeric keys on my laptop. The next four keys in the row (9,0, -, =) are mapped to the Bank buttons. On the Matrix I’ve done the same but with the Shift key. I’ve also got a Dr OctoRex loop player, with the eight loop selectors assigned to the top row of QWERTY keys. Making a template song with this set up is helpful because the assignments are only stored with the song, not globally. (It’s also important to note that each key assignment is for a specific object in the Rack, not any device of that type).

You are now set up to ‘play’ sequences and loops from the keys. If you do this during playback, pattern/loop changes are quantised to the next bar. Once you’ve figured out a rough arrangement you’ll want to capture it into the Sequencer (Ableton users will be familiar with this idea). When capturing a single device simply select it in the Sequencer, hit Record and start performing your arrangement. If you want to record pattern changes on more than one device at the same time you first need to arm automation on all the associated tracks. To do this click the Record Enable Parameter Automation button on each of the tracks you wish to record — it’s the red circle with a graph icon as shown in screen 2.

3: The On-screen Piano Keys window in Computer Keys Mode.In the main picture I’ve already recorded pattern sequences, which appear as automation in the Pattern Select lanes of the Redrum and Matrix, and also a Dr OctoRex loop player. The pattern blocks can be trimmed, moved, copied or duplicated, or changed to different patterns. You can even break the bar quantising, which is particularly useful for dropping in patterns for less than a bar to create variation and fills. You can also drop in and record over the track to make changes in real time.

Pattern sequencing is not your only option for working without MIDI inputs. You can also make use of the On Screen Piano Keys Window (screen 3) to play notes in. This window offers two modes: Mouse and Computer Keys. In Mouse mode the window presents graphical piano keys that you simply click to play notes. Velocity is determined by where you click the keys: quietest at the top, getting louder towards the bottom. The window can be resized freely in mouse mode, which makes for an interesting possibility if you’re working on a touchscreen computer. I’d love to try playing Reason on a Surface Pro with the piano keys zoomed up to life size.

Computer Keys mode lets you generate MIDI notes from your QWERTY keys, something I use a lot. This works the same as in Ableton Live, with the Z and X keys shifting the octave. Obviously the downside is that your computer keys are not velocity sensitive, but you can adjust the velocity on the fly with the number keys, and also set a degree of randomness. While this might not inspire a virtuoso performance, it’s adequate for sketching out drums and adding pads, etc. In the main picture you can see some note clips in the Redrum track where I’ve used Computer Keys mode to quickly dub a few extra cymbals and fills over the patterns. Usefully, when the Computer Keys window is open, it will override any manual key assignments, like the ones I made for my Dr OctoRex device.

Even with tablets, phones and portable workstations now offering sophisticated music production possibilities, I still find Reason on a laptop the best mobile synth studio with the fewest compromises.