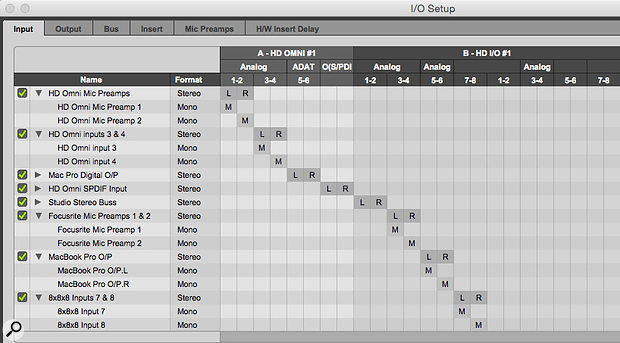 Clear labelling is vital to avoid confusion within the I/O Setup dialogue and elsewhere.

Pro Tools 12 makes radical improvements to the way inputs and outputs are handled, which benefit all users.

Although it’s one small part of the Pro Tools experience, the I/O Setup dialogue is fundamental to the program — at least if you want to get any sound into or out of it! Over the years, Avid have refined this window, and we have visited it several times in workshop articles, notably in August 2007 (www.soundonsound.com/sos/aug07/articles/ptworkshop_0807.htm) and following the major upgrade in May 2011 (www.soundonsound.com/sos/may11/articles/pt-0511.htm).

Even after these revisions, however, the I/O Setup window could still cause problems to the unsuspecting Pro Tools user. Consequently, in Pro Tools 12, Avid have made further refinements that definitely help make it a lot easier to move sessions around. I had first-hand experience of this recently when I went into SSR in Manchester as guest lecturer and found reconfiguring my sessions to their I/O settings much easier than in previous versions. So, what’s changed in the I/O Setup window in Pro Tools 12?

Most of the changes that Avid have made in the I/O Setup window have to do with reinforcing the distinction between session-related settings and hardware-related ones. Many of us work increasingly with sessions that travel between different systems with different configurations: some just use stereo outputs, some have surround, some don’t mix in the box and so send tracks to an external mixer or summing amp, and so on. Anyone working in this kind of scenario will often have to spend much more time than they would like in the I/O Setup window reconfiguring things before they can even play back an incoming session. Wouldn’t it be nice if the I/O labelling and routing for your hardware could be left alone? Well, in Pro Tools 12 Avid have added a number of features that help to achieve this goal.

In Pro Tools 12, buses now live with the session, whereas all the other tabs in the I/O Setup window relate to the hardware. This means that when a new session comes along, the only I/O configuration it brings with it is its own set of buses; these, in turn, are patched to inputs and outputs on your interfaces, and thus connected to the rest of your studio.

This, of course, makes it even more crucial that the rest of the I/O Setup page is configured appropriately for your hardware, and proper labelling of inputs and outputs can make all the difference here. I recently added an HD Omni (with a quiet fan fitted) to my own setup, which in essence is my monitor controller, while my 8x8x8 interface handles the I/O for all my other studio equipment. As you can see from my screen captures, I have labelled all my inputs and outputs of both interfaces with what is connected to them; this makes it much easier to configure routing, because I don’t need to remember that B7 and B8 feed my guest headphone amp, or even have to turn round to look at my patchbay to remind me what is plugged into what.

At one level, this is nothing new — as far back as 2007 I was stressing the advantages of labelling everything. What has changed in Pro Tools 12 is that the labelling for all interface-related stuff will stay the same when you import a session from another Pro Tools system; and, most importantly, the monitoring path has a new status.

In Pro Tools 12, Avid have added a Monitor Path,

Not only that, but if you open up a surround session on a non-surround-capable system, Pro Tools 12 will automatically downmix the surround Monitor Path to stereo for you, so there is now no need to wreck a surround session in order to audition it on a stereo system. This downmix happens deep inside the Pro Tools signal flow between the mixer output and your interface, meaning that no automation or routing within the session is changed or lost, so that when the session is opened up on a surround-capable system, everything is still intact. The downmix is indicated on the track output selector with a forward arrow symbol, and the I/O Setup window will also inform you that downmixing is taking place by indicating the different output width in the Bus tab.

AFL/PFL was previously an HD-only feature and was also tied into Avid’s X-Mon system, but in Pro Tools 12 Avid have made it available to all users, and now that it’s implemented in software, it doesn’t need X-Mon either. AFL/PFL allows you to set a different output path for the solo bus, so that your main outputs are not disrupted when tracks are soloed, which is very important if you are working in a live or broadcast context. You can also set an independent volume level for this solo path. The new built-in downmixing also means that any available output width can be chosen, as the signal will downmix as required.

Once you have configured your hardware-related settings in the I/O Setup window, you can move onto the session-related bussing setup. Buses are used in a variety of contexts where audio needs to be routed around the Pro Tools mixer, and might be employed differently in different sessions, so it makes sense to keep bus settings session-specific. In previous versions of Pro Tools, moving large sessions between different systems could end up producing a huge build-up of buses. To help reduce this bus build-up, in Pro Tools 12, sessions default to creating just 24 unassigned buses, but this doesn’t limit the total number of buses you can have — quite the reverse, in fact. Avid have in fact removed the upper limit on the number of buses you can have, but have sensibly minimised the number of buses Pro Tools creates automatically in a session.

Before Pro Tools 12, if we wanted to feed more than one output we would have to select the additional outputs within the mixer, which could end up being very messy, and again, caused confusion and problems when sessions travelled around. Nevertheless, it’s a very real need: in my setup, for instance, I need to be able to feed my monitoring output as well as a pair of outputs on my 8x8x8 that are routed to external recording devices. To do this in Pro Tools 12, go to the Mapping to Output field in the I/O Setup Bus tab and then right-click, or use Ctrl-click (Mac) or Start-click (Windows) to access a drop-down menu of available outputs to add.

Buses can now be routed to multiple interface outputs, which greatly simplifies studio setups where you need to duplicate your output signal. This is a brilliant feature and I will be making heavy use of this on my two-interface system.

Another aspect of the I/O Setup changes in Pro Tools 12 is that you don’t actually have to have a large multi-channel interface attached to your computer in order to set up a session with multiple outputs. You can, for instance, configure a large surround-based project on a machine with only a single stereo output, or set up and prepare sessions and session templates for much larger systems using a small laptop system.

Similarly, Pro Tools 12 will save a separate set of I/O settings for each Playback Engine available on your system, remembering the inputs, outputs and other hardware-based settings, like Monitor and Audition Path, for each of them. This means that if you switch between different interfaces, Pro Tools will automatically reconfigure the I/O settings, and buses will retain their mapping, just as if you were opening the session on a different system.

Taken together, all these refinements to the I/O Setup window make a huge difference, and absolutely make the upgrade to Pro Tools 12 worth doing!

Once you have set your I/O Setup exactly the way you like it, it’s a very good idea to save a copy of the I/O settings in case something goes wrong in the future, or in case you want to switch between different configurations. Clicking on the Export Settings button at the bottom left-hand corner of the Pro Tools 12 I/O Setup window will let you save them for future re-import.