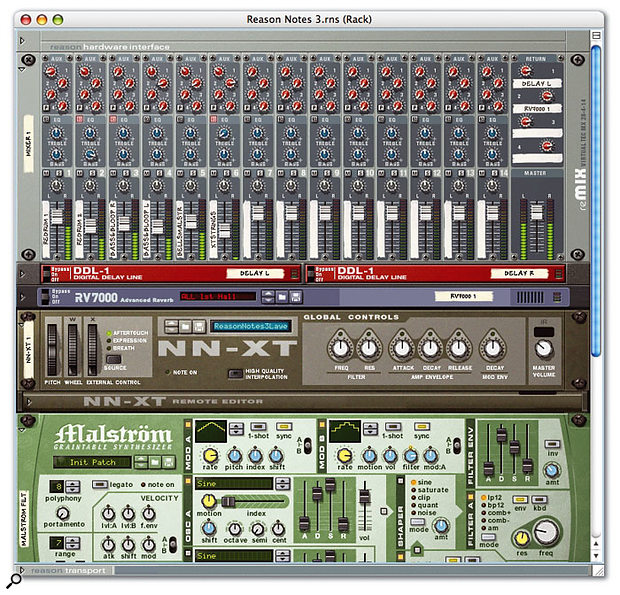 The rack you'll need to try out the 'instant track' technique.

We explore an advanced technique for creating 'instant' tracks.

As a reviewer of hardware and software for this magazine, I often examine all-in-one workstation synths that try to be attractive to any style of musician at almost any level. Hence, some preset data is often dedicated to producing the 'one-finger track' effect: press a key and everything — drums, bass line, arpeggiations, chopped chords, the lot — happens. Very impressive in a demo situation, and a bit like cheating... but if I'm honest, this sort of thing can be rather a lot of fun. It's even more fun — and less like cheating — if you analyse the presets and work out how to create something unique to you, in your style. One-finger patches can also be useful in live situations, offering an instant way to vamp through a break while the next song loads or the band changes instruments, and so on.

I wondered how I'd create a layered patch like this in Reason, without any extra bits of software. It's not actually too difficult, keeping a few issues in mind. Creating a layer of devices that can be played from your master keyboard is straightforward, but done in the obvious way, via the software's four incoming MIDI busses accessed via the Hardware Interface, it requires you to copy and paste sequencer tracks to create a layered performance in the sequencer. This is not quite what we want. Of course, V2.5's Spider CV splitter/merger devices allow one Matrix step-sequencer to play up to three synth or sampler devices, but that's not 'real-time' any more. A further issue is that most modern workstations feature some sort of arpeggiator to add instant sparkly interest to a one-finger performance, and Reason currently lacks one. However, this software is nothing if not flexible, and we're going to ignore or solve these problems.

The problem of not being able to layer multiple devices in a logical way without external help is solved by using one device: the NNXT Advanced Sampler. Though this might seem like a restriction, given the correct raw sample material the synthesis facilities on offer are powerful enough to let you get very creative. The only problem with making this example for readers of this column to recreate is that I'm restricted to the raw material contained in the factory Refills, which means selecting single samples from within multisamples. (I have a collection of looped raw synth-waveform samples that I would normally use for my own purposes.) 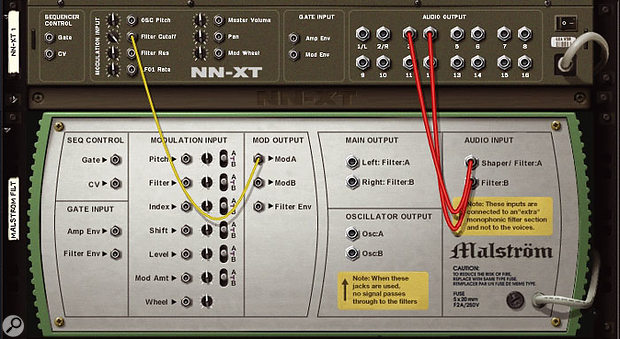 Here's what the connections between NNXT and Malström look like, with all other cables removed for clarity.

First of all, make sure your Reason rack has a Remix mixer and whatever effects you favour loaded into it. I always start with an RV7000 advanced reverb and a couple of DDL1 delays (for tempo-sync'd delay effects). Now add an NNXT.

Load the first sample, by clicking on the 'Load Sample' button. Navigate the Reason Factory Sound Bank Refill, through NN19 Sampler Patches to the Basses folder and then the AccBass sample folder; choose '011,C1,Med,onG string.WAV', if you'd like to recreate my layer exactly. You may have to 'Set Root Note From Pitch Detection' and 'Automap Zones', from the Edit menu. Now go to LFO1: enable Tempo Sync, select the square or sawtooth waveform, and set the rate parameter to 1/8 (eighth note). Turn the Level knob fully right. Play a note, and the decay of the bass sample is chopped up into eighth notes. That's one layer.

For the next layer, find the Fretless Bass folder in the NN19 patch collection and load 'FretlessC1,med.WAV'. We'll leave this for the moment, except to set its pitch and map it. We might also want to just individually highlight each of our first samples and choose 'Group Selected Zones' from the Edit menu. Each sample thus becomes its own 'Group', with dedicated sets of synth parameters.

Now we're going to do something a bit different... Load the 'VibraA1.WAV' sample (NN19 Vibraphone patch folder, Mallet and Ethnic collection). The main thing we'll do with this sample, which we'll also make its own Group, is add a repeating octave effect. Set LFO1 to Tempo Sync, and give it a square waveform. I set the rate to quarter-note, but it's your choice. The Pitch amount knob should be tweaked to around 1200; I prefer a negative value (left), but a similar effect will be produced with a positive value (right).

This month, the producers of our favourite software electronic studio celebrate their 10th birthday. Yes, it was 1994 that saw the introduction of Recycle, initially for the Mac only, under the Steinberg badge. The company's still going strong, and even Recycle is still developing — see the review of v2.1 in the last issue. Who knows what Reason will be like 10 years from now...

We're going to make a drastic change to the texture produced by this sample, so first set its audio output to 3-4 (use the last knob on the right under the blue display). Next, create a Malström device, patch NNXT outs 3 and 4 to the Malström 's two audio ins and enable both filters and Mod B. For Mod B, Select 'sync', choose a rate of 1/4 or 1/8, and select a stepped waveform — curve 23 or 24. Malström is now behaving as a signal processor, but the modulator (essentially a sophisticated LFO) is adding an arpeggiator-like stepped effect to each filter's cutoff frequency. You'll have to tweak frequency and cutoff to get the audible effect that's best for you, but start with frequency quite low (to the left) and resonance in the middle, with LP12 the filter type of choice to start. You can also turn the Spread control fully right, to create a pseudo-stereo effect.

We're not done with Malström yet. Remember the second sample we loaded — the fretless bass — that we left alone? Let's go back to it, by clicking on the box in the Group column to the left of the sample. Before we go any further, I'll just note that I panned this sample (Group) hard left and the first sample we loaded hard right, and routed NNXT output 1/L to one Remix channel and output 2/R to another, obviously both in mono.

Back to the Malström. We're going to be using its Mod A section, routing the CV output at the back to NNXT 's Filter Cutoff CV input (on the rear of its global controls panel). Due to NNXT 's design, this is is routed to the cutoff frequency of all filters currently in use, but in this case it's not a problem. Set Mod A to tempo sync, choose a rate of 1/8 and select a stepped waveform. We want to really hear the effect of this LFO on our fretless bass, so tweak its filter parameters thus: Filter type LP24; cutoff frequency 33Hz; resonance 79 percent.

Now we have a chugging bassline, an impressionistic burbling texture created by the fretless sample, and high-frequency movement from the 'arpeggiated' vibe sample.

The last thing we'll add to the mix is a straightforward two-note string chord. Here I chose a couple of samples from the Strings folder (that's in the Strings folder — really — in the NN19 Sampler Patches folder). Go for 'Bigsc4.aif' and 'Bigsd#4.aif'. Highlight both and 'Group Selected Zones' from the Edit menu; this way, you can apply synth and output settings globally to both samples, though you'll still be able to tweak each sample separately by clicking just on its name. 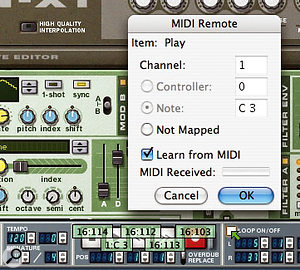 Setting Reason to start playback by pressing note C3 — middle C — on an attached MIDI keyboard.In my 'patch', I routed these two samples to their own audio output pair — 5-6 — and on to their own Remix channel. Individually, I panned the samples slightly left and slightly right. Also, I retuned the D# sample to a root note of G#2, causing it to play a fifth higher than the other sample, producing an instant chord. I also EQ'd their Remix channel a bit, taking almost all the top off by moving the treble knob to the left. Add effects to taste

And that's it — almost. Right now, the texture we originally created is completed by an ethereal two-note top line. Adding drums is straightforward. You could create a little count-in within Redrum and automate how it plays back, perhaps giving you a one-bar click followed by one bar of silence before looping the desired drum pattern, or you could do the following.

First, make sure that the Remote Control input in Advanced MIDI preferences is set to your MIDI keyboard. Under the Options menu, select Edit MIDI Remote Mapping, and click the green arrow that appears over the transport bar's start button. Enable 'Learn from MIDI' in the pop-up window and play the first note of your one-finger performance. Close the window and disable Edit MIDI Remote Mapping, but ensure that Enable MIDI Remote Mapping is ticked. Now when you play the first note of your sequence, Reason 's drum machine, and whatever else happens to be playing in the sequence, will kick in and all the tempo-sync'd LFOs and delays will play along nicely

There are many ways of extending this idea. In fact, many a similar patch has formed the basis of an entire track for me — I write and automate a Redrum track, play one-fingered for the desired length of time and then add some more material to develop the original idea and texture. Have fun!