The Man Who Was Thursday

This CD features an eclectic mix of styles and is packed with excellent sounds and interesting arrangements. It kicks off with a dirty fusion of progressive rock and dance, and composer Matt Constantine is also not afraid to show his classical leanings. After an 'in your face' introduction of thrashy rock drums with distorted synth, he leads us into a filter-modulated synth loop based around a simple pattern that wouldn't be out of place in a piece by Bach or Beethoven! I liked the way noises and other effects were used in addition to, and sometimes instead of, drum fills to lead us from one break to another. Yet it's the dynamic drop about half way through the track which most clearly demonstrates Matt's arrangement skills. Here he uses a resonant synth sound to carry the melody line. Underneath this, there's a variety of drum breaks with different amounts of bandwidth filtering and some excellent resonant sound effects. The difficult change back to a reprise of the thrashy intro is well handled, with a distorted loop acting as the link.

When I first heard this track, I confess I was expecting a sung vocal to come in at any moment and when one didn't arrive, I thought that this was going to be an instrumental CD. Surprisingly, then, the second mix turns out to be a song with vocals from Matt himself. They are well performed but have a hint of sibilance, emphasised by the high-frequency reverb treatment and probably a touch of high-frequency EQ boost. I think a warmer sound would have suited his voice, so perhaps the bright AKG C414 is not the best choice of microphone. Some lower-mid EQ boost on the vocal could also improve it. On the other hand, a thin vocal sound may have been a deliberate production decision.

I would argue that Matt's extensive use of vocal effects also means that he didn't really need to go for a very stylised sound from the vocal itself. The stereo echo and vocoder on the word 'insane' are very effective but a little too loud — perhaps Matt was a bit too pleased with this particular effect! The light distortion and delay on the word 'energy' is also good, but the front end of the word seems to be missing, as if the auxiliary send wasn't turned up quite fast enough to send the whole word to the delay. Sometimes it's better to trigger these kinds of effected individual words from a sampler, or to put them on a separate track to make setting up the effects treatments easier.

When it comes, the drop to the middle section in the second track and the use of a music-box-style loop, played on an electric piano with slight distortion, is a nice touch. In fact a lot of the sounds are very good, especially the natural-sounding kick and snare. One of the things that doesn't work in this track is the ascending string line which needs a bigger sound and a faster attack to really lift into the heavy riff. With such a vast array of samples available there must be a more suitable one.

For the third track, Matt moves more towards the classical but in an off-beat manner suggestive of movie soundtracks. His use of cello, harpsichord, a synthesized bassoon sound and pizzicato strings are framed by synthesized string sounds, while cracked tubular bells provide the title theme. Film and theatre work is surely worth investigating when you're armed with such an arsenal of interesting sounds!

Both the main reviews this month focus on demos recorded using setups heavily reliant on software, and, for a change, neither demoist complained about CPU limitations! Most of the demos in the Quickies section were recorded on a PC or Mac too and the quality was generally pretty good. Perhaps domestic computer-based recording systems have finally become stable enough to convert even the most stalwart hardware user?

Well, until you decide to upgrade, that is. Upgrading has cost me more sleepless nights and extra work in the last six months than I care to think about. I recall SOS contributor Craig Anderton's words on the subject — how I wish I had heeded them myself — and advise you to take note: "never upgrade before an important project"! 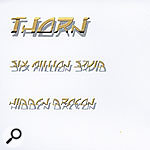 Thorn's first track features some excellent percussion programming. Kicking off with an interesting drum loop filtered into a narrow frequency band and, surprisingly, a running water sample, the track's techno leanings aren't made clear until a suitably metallic-sounding hi-hat makes an appearance. This is enhanced by a very digital-sounding comb filter (possibly supplied by Reaktor) which really seems to push the hi-hat to the front of the mix. Sadly, the kick drum is a let-down. It's got quite a long decay and isn't mixed high enough to have any impact. A harder, shorter, more punchy kick would really drive this mix along. There's a general lack of aggression in the production on this track — possibly a sign of low confidence — and I would urge Thorn to really go for it with some alternative, more extreme versions of these tracks.

Thin, ethereal strings are a feature of Thorn's mixes and these leave plenty of room for the drum loops which are their main strength. The second mix demonstrates this well, but the choice of bass sounds is poor. Given the plethora of excellent virtual synths at Thorn's beck and call (like the Novation Bass Station plug-in) this is rather disappointing. I know from experience that Bass Station can supply plenty of attack, yet although the bass sound driving this mix along is fat, it's also a bit limp. If this is definitely the bass sound of choice, it could be improved by running a kick drum underneath to give the sound some attacking edge. First, make a copy of the bass synth MIDI track on the sequencer then edit the MIDI note numbers to the right trigger value for the kick — the bass line is very simple so this shouldn't take long. Next, mix the triggered drum low under the bass synth so that you add to the attack without necessarily hearing the drum itself. In some ways, Thorn's mix already attempts to do this by accenting some of the bass synth notes with a kick drum but it's not working because the drum and the synth are operating in the same frequency range and neither has enough attack or punch.

With a little extra work on the low-frequency area, both in the choice of sounds and the arrangement, these mixes would be improved immensely — they're so nearly there now. Finally, Thorn shouldn't be afraid of simplicity: if a track needs a strong four-four kick drum, put it in as the anchor point for the more clever and complex loops to swing around. 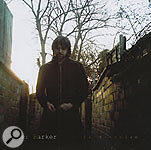 I was impressed by Roger's songwriting as well as his singing style, which has a blues flavour with some elements of Crowded House's Neil Finn thrown in. Sometimes, however, the arrangements sound a bit too fussy. For example, in the second song, he sets up a really nice groove in waltz time, but then kills the mood by dropping into a 4/4 funk groove. The change is cleverly done, especially when the track goes back into 3/4, but it actually sounds like two songs forced together. I think it could work if the 4/4 section was used as a middle eight and the 3/4 groove was left to run for longer — say, two verses and choruses — before the change. Having said that, the play-out is particularly beautiful, with a backing vocal on the off-beat working almost in question-and-answer style with the main vocal.

This is a pretty thin-sounding demo and I feel for the guys in the band because they've put so much effort into the recording. Everything is fighting for space in the 2kHz region in a classic case of over-EQ'ing, and there's no bass to speak of either. People often make this kind of mistake in their use of EQ when they listen to an individual instrument in isolation for too long and spend too much time working without a break. Often the real objective — the best sound possible — gets confused with clarity and brightness and this results in over-EQ'ing individual instruments in the upper-mid area. The trouble is that, in comparison, the other instruments then start to sound dull so you have to EQ them too, usually in the same frequency region, until all the mix elements end up with a similar EQ and the entire mix is upper-mid heavy. The mixes on this CD could perhaps be rescued with corrective EQ, but they really need to be remixed from the ground up. EQ can be a dangerous thing so remember to use it carefully, keeping the sound of the mix as whole in mind! 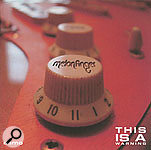 A glance at this demo's well thought-out CD sleeve tells you a lot about the band's image and genre, and if you check out their rather stylish web site you'll see that this lot are pretty well organised (for a rock band!). Though they do rock, they have their mellower moments too, as the acoustic guitar-led second song demonstrates. Technically, I liked the way Melonfinger integrate the Yamaha MIDI drumkit seamlessly into their rock/pop sound, using NSG's Drumkit From Hell samples. Melonfinger have a high-energy approach to songwriting, performance and production, which is handled with great skill, on the first and third tracks in particular. The energetic vocal delivery is best placed lower in the mix — on the third song, for example, the voice almost has to fight against the backing and this gives the mix itself more energy. Musically, this band are rather hard to define, with their '70s pop/rock sensibility tempered by more contemporary influences. According to the web site they play a lot around the Hertfordshire area with occasional forays into London, and they seem well worth checking out.

There's a definite country-rock slant to this demo, with some nice acoustic guitar melody lines recorded using a Rode NT1 microphone and a touch of compression. However, there's a tendency to make the strummed acoustic guitars so bright that they obscure the hi-hat. This may have been done using post-production EQ to improve the perceived presence of the mixes and compensate for the rather low level of the cymbals. If so, then a full remix would have been a better option, lifting the cymbals and taking some of that sizzle back out of the guitars to give them a more natural presence in the mix. Given that this demo was a means of testing some recording equipment out I can almost forgive the complete lack of taste in the application of effects like chorus and pitch-change. Of all the effects, reverb was, for the most part, well handled, but I wouldn't want to give Portal the confidence to apply any more! The songs are OK too, but they should ditch the modulation on the vocals next time.