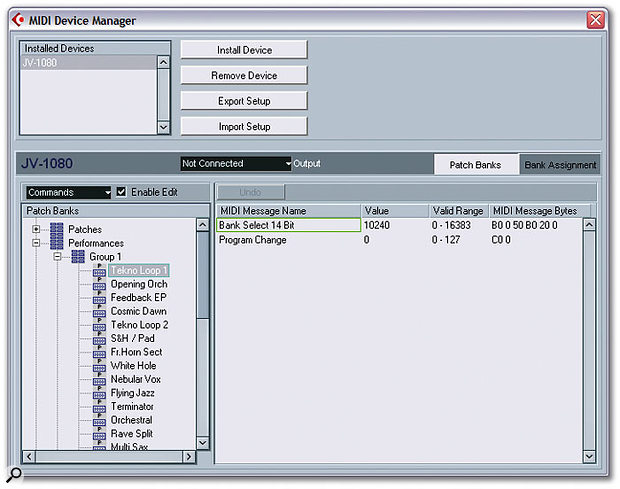 The MIDI Device Manager in all its glory. Note the hierarchy of the Patch Banks list in the bottom-left of the window, where the elements labelled Patches and Performance are examples of Patch Banks, Group 1 is a Folder, and the icons with small 'P' symbols indicate Presets.

Cubase SX 's MIDI Device Manager provides a way of choosing patches and banks on your external MIDI hardware by name rather than number. This month we look at how to create your own MIDI Patch Name Scripts to make this possible.

One of the smallest features that impressed me the most in the original Cubase SX was the neat pop-up library, with inbuilt search facility, which appears when you choose a patch for a MIDI device that has published its list of patch names to the application. Most VST Instruments publish their patch names by default, but for this to work with regular MIDI devices you need to have assigned MIDI Devices to specific MIDI ports available to the system, in the MIDI Device Manager.

A MIDI Device is a virtual representation of a hardware device in Cubase and is based on a Patch Name Script that describes to Cubase the patches and banks used by the hardware device. MIDI Devices are configured in the MIDI Device Manager, and you can add one by clicking the Install Device button and selecting the appropriate device from the Add MIDI Device window and clicking OK. The device you've just added should be selected in the Installed Devices list. You can assign it to a MIDI output port by clicking the Output pop-up menu (just beneath the Import Setup button) and selecting the MIDI output port to which you have connected the actual hardware device.

Unfortunately, Cubase SX doesn't come with a Patch Name Script for every piece of MIDI gear in existence, but fortunately this Cubase Notes column is here to help when you need to create your own MIDI Devices and Patch Name Scripts from scratch.

Not Just A Number

To create a new MIDI Device:

The next step is to add some Patch Banks to the device, but the first thing to point out about Patch Banks is that they shouldn't be confused with the regular MIDI banks on your instrument — Cubase provides another organisational layer for these, as we'll see in a moment.

If your MIDI device has several modes that you might refer to as Patch, Performance and Drums (for playing individual sounds or programs, combinations of sounds, and drum sounds respectively), these are the elements we'd describe as Patch Banks when creating a new Patch Name Script. However, if your MIDI Device doesn't feature different modes that would be categorised as Patch Banks, don't worry. Since a MIDI Device has to contain at least one Patch Bank, just use the Patch Bank Cubase creates by default for a new MIDI Device.

In the spirit of the British sit-com Allo, Allo, listen very carefully: I shall say this only once. When you want to edit Patch Banks — for example, for renaming them or creating new ones — you need to make sure the Enable Edit button is active (ticked) just above the Patch Banks list. If it isn't active, simply click it. Some early versions of Cubase had a problem wherein Enable Edit isn't always active, even when it appears to be, so if you're ever in any doubt simply disable Enable Edit and reactivate it, and everything should be fine. When Enable Edit is truly active, the Commands pop-up menu should appear in a lighter-coloured text.

When there's more than one Patch Bank in a MIDI Device, an extra button labelled 'Bank Assignment' appears in the centre strip, providing access to another page of controls that allows you to set which Patch Bank is used by each MIDI Channel in the device. It's necessary to assign Patch Banks to MIDI Channels because only the Folders and Presets for one Patch Bank can be displayed when selecting presets for a MIDI Track on the Project window. To change the assignment of Patch Banks to MIDI channels: 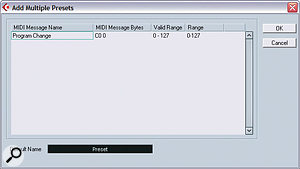 The Add Multiple Presets window does exactly what it says on the tin, allowing you to create multiple presets, automatically incrementing the appropriate parameters, in one pass.Although adding presets one at a time is perfectly acceptable, this process can quickly become tedious, considering that most modern MIDI devices often have many hundreds of Presets, many at a time. So, to add multiple Presets in one go:

By default, the Add Multiple Presets window provides a Program Change event; however, you'll notice that, unlike the columns provided in the Preset edit view, there's no Value column for the Program Change messages. Instead, there's a Range column. If Range is set to 0-127, for example, Cubase will automatically create 128 Presets where the first program change Value is 0 and the subsequent Values are incremented by 1 — so that a Preset is created for every value from 0 to 127. The Default Name field at the bottom of the window provides a root name for the Presets: in the above example, the Presets we'd create would be named Preset 0, Preset 1, and so on. The Presets created would then select consecutive sounds on your MIDI device.

After creating the new MIDI Device's Patch Banks, it's time to fill these with Folders and Presets. In the context of Patch Name Scripts, a Preset represents a single patch, program, sound, or whatever you want to call it, on your MIDI device. A Folder is a way of organising Presets within Patch Banks. You could use Folders to represent the banks of sounds on your MIDI device, or even to group Presets in terms of their category — for example, Folders for pianos, strings, basses, and so on. 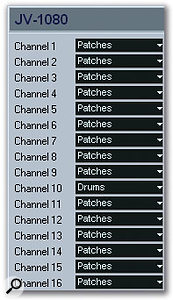 The Bank Assignment page allows you to assign specific banks to each MIDI channel of your device — useful, as shown, where you want the drum bank to be used only on channel 10, for example.To begin with, let's consider a simple device where there might only be a handful of Presets required and no need for Folders. If you expand the default Patch Bank in the Patch Banks list, you'll notice that Cubase creates a default Preset labelled 'Off', which is effectively a blank Preset. To add a Preset to a MIDI Device:

To configure a Preset, select the Preset you want to configure; in this case, select the 'Off' Preset and the bottom-right area of the MIDI Device Manager will open into a view where you can edit Presets. The Preset editor view is made up of a series of columns, and the idea is that each Preset contains one or more MIDI events that are sent to your MIDI device when the Preset is selected in Cubase, so that the right sound or program is selected on the synth or other MIDI device.

To add an event to the Preset, simply click at the top of the MIDI Message Name column in the Preset editor view and select the required MIDI event from the pop-up menu that appears. The basic event that changes programs or sounds on a MIDI device is known as a program change, so you'll probably want to select Program Change from the pop-up menu. This just happens to be the first entry in the list.

Give the Program Change event a suitable value by clicking the default value and entering a new value within the range indicated in the Valid Range column. The value will depend on the Preset you're creating: for example, if you were creating a Preset for the Grand Piano sound on a General MIDI sound module, you'd want a Program Change event with a value of 0 (as this is the value defined for the General MIDI Grand Piano). You should be able to find the relevant Program Change values required by the sounds on your MIDI device in the device's manual. Additional events (for changing banks — see 'Adding Multiple Presets' box) can be added by clicking in the MIDI Message Name column below the previously created Preset.

You can delete the event currently highlighted by the light-blue box by pressing the Backspace key, and select a different event by clicking (or using the cursor keys) in any column in another event. Using the up and down cursor keys is often the safest way, since you can accidentally change the settings of an event you want to keep by clicking with the mouse. Rename a Preset as you would a Patch Bank, by selecting it in the Patch Banks list, clicking the name part of the Preset, typing a new name in the text-edit field and pressing the Return key.

And finally, to delete a Preset, simply select the Preset you want to delete in the Patch Banks list and press the Backspace key. You can also select multiple Presets and delete them in one pass, just as you'd select multiple files on your computer's desktop. In other words, select a Preset as normal and Shift-click another Preset to select all the Presets in between, or Control/Apple-click the individual Presets you want to select.