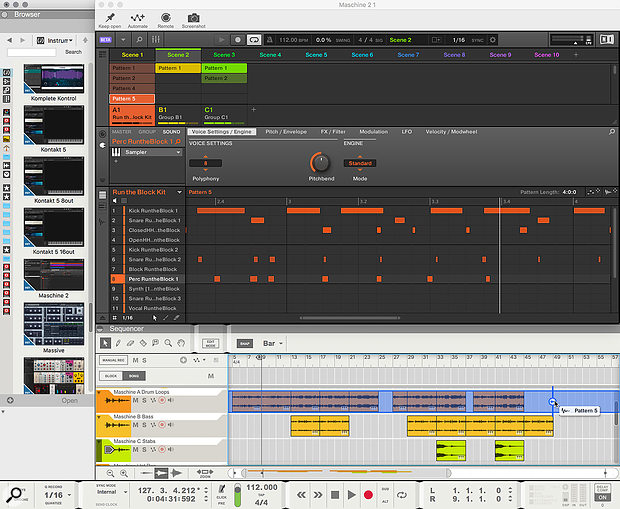 Screen 1: You can drag Maschine Patterns as audio into Reason and arrange them in the Sequencer.

We show you how to integrate Maschine with Reason.

The introduction of VST plug-in support opens up some interesting new ways of working in Reason, not least of which is the chance to incorporate other composition and performance workstations like Maschine and MPC. In this article we’ll look at how to use NI’s Maschine inside Reason and thus benefit from the fluid performance workflow and hardware integration that are hard to match with Reason’s standard toolset.

First I’ll assume that you have Maschine and are reasonably familiar with its use, either in stand-alone mode or as a plug-in within another DAW. We’ll look at some basics of routing Maschine into Reason’s mixer and recording or exporting into audio tracks, and compare a number of fairly different approaches to using Maschine in Reason.

To briefly recap, you’ll need to have updated to Reason 9.5 and ticked your VST plug-in folder in Reason’s Advanced Preferences. Maschine will then show up in the Browser’s Instruments tab, grouped with any other NI plug-ins you have. Drag it into the Rack or Sequencer and it will be added to your project, hosted inside Reason’s plug-in Rack device. You should be able to start playing it straight away from your Maschine hardware. The stereo master output from Maschine will have been automatically connected via a new Mixer channel.

There are two main differences between using Maschine and a standard instrument in Reason: Maschine has its own internal sequencing and arranging features, and it’s multitimbral so can itself host multiple sound sources. Maschine’s tempo and timeline are automatically kept in sync with Reason’s. Playback is controlled from Reason, so the Play button on your Maschine hardware will be inactive while working this way. The Record button, however, is used for initiating recording in Maschine Patterns. The main thing to be aware of is that keyboard focus may be taken by Maschine when its plug-in window is open, so you may need to click back into Reason to direct the keyboard there. The easiest way to work is to use the Maschine hardware for as many Maschine-related operations as possible, such as Undo or UI navigation, and then you shouldn’t get your keyboard commands mixed up.

The most recent iterations of Maschine have two different working modes: Ideas and Arrangement. Ideas mode presents you with a list of patterns for each sound Group, where you can capture Patterns, set up Scenes, and experiment with performances independently of a timeline. The Arranger is the traditional Maschine mode, where you work with a Scene-based timeline. In Ideas mode, playback always loops around a single Scene, the duration of which is set by the longest Pattern active in the Scene. In the Arranger, playback position is sync’ed to Reason’s timeline, or you can define a loop.

The Choice Is Yours

There are several ways you can use Maschine in Reason. You can use Maschine as a place to create individual loops, sequences and drum patterns, which you then transfer into Reason audio tracks. You can assemble longer arrangements in Maschine’s timeline that run alongside Reason. Or, you can set up and jam complete performances in Maschine which you capture into Reason audio tracks as you would a live instrument.

Another consideration is whether to use a single instance of Maschine hosting multiple sound sources, or multiple instances with a single source in each. The latter is simpler to deal with in terms of setup and routing, but the former is better for taking advantage of the real-time performance features of Maschine. One thing to note is that while it’s common in some DAWs to use Maschine like a multitimbral sound module controlled from multiple MIDI or instrument tracks, this isn’t possible currently in Reason. Reason doesn’t have the concept of internal MIDI routing, and devices/plug-ins in the Rack ignore MIDI channel information once the MIDI data arrives at the instrument.

What you can do, though, is route multiple audio sources from within Maschine to different places in Reason, and also record Maschine to audio tracks. This could be a single mix output, or discrete channels from Maschine’s internal mixer. We briefly touched upon this in the last Reason column.

You’re probably aware that any Pattern in Maschine can be exported from the plug-in into a DAW by dragging and dropping. This works in Reason too, but only as audio. it is done from the small audio waveform icon at the top right of the Pattern view in Maschine (Screen 1, above). Select the Pattern you wish to export, then position the Maschine window so that you can see the audio track where you wish to place it in Reason’s Sequencer. Next, click and hold on the waveform icon while a progress bar pops up to show you the render process is happening. Then drag across to the Sequencer and drop in the desired place.

Clips that are dropped from Machine to Reason are the full original recording length, even if you subsequently trimmed them to a shorter bar count. You’ll need to tidy this up manually by trimming in the audio track. Using this method, you can export all the Patterns you’ve made in Maschine and arrange them using the familiar Reason timeline. By default, when you export a Pattern from a Kit, the rendered audio will be a mixed output from the whole Group. In Maschine, an instrument-based source typically uses a single Sound slot from within a Group, so dragging and dropping out a Piano Roll pattern only exports that slot.

You can use this as a hack if you want to export drum loops as discrete channels to multiple tracks too. Select the Group containing the kit, then switch to Keyboard view from either the plug-in UI or the hardware. You’ll now be able to view each drum sound on its own, and use the drag-and-drop approach to export to separate audio clips. 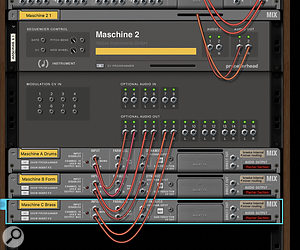 Screen 2: Here, individual Maschine outputs are connected to separate mixer channels.If you plan to work in the Maschine Arranger or capture live performances, you’ll probably want to set up some custom routing so that you can split out your Maschine audio sources into Reason’s mixer. Maschine has 16 audio outputs that emerge in the Reason Rack through the jack outputs on the rear of the VST plug-in device. The easiest place to define these outputs within Machine is in its mixer tab, which is accessed by hitting Tab in the plug-in. The default view in Maschine’s mixer is the Groups. You can change the output of each Group from its mixer channel. The 16 internal outputs are labelled Ext 1-16. Ext 1&2 are the master outputs that will already be assigned to the main output ports on the VST device and connected to a Reason mixer channel.

You can also route any of the individual pad outputs within a Group to direct outputs. To access the pad channels, double-click a Group channel in the mixer and it will switch to the 16 pad channels view (Screen 2). This allows you to separate individual sounds in a kit to different mixer channels for mixing or recording in Reason. You need to be economical with your use here as there are only 16 outputs. Output assignments are always stereo, but you can route sounds to single Mono outputs by choosing a stereo bus then panning hard left or right.

You can connect the individual outputs to anywhere in the Rack, but most likely you’ll want them to route into Reason’s mixer. To do this, you need to create a new mixer channel for each source. Just in case you’ve not done this before, each mixer channel manifests itself in the Rack as a 1U device, providing input and insert connections (Screen 3). As always, it’s good practice to make a template of your structure by Combining to a Combinator patch to save yourself the work next time. 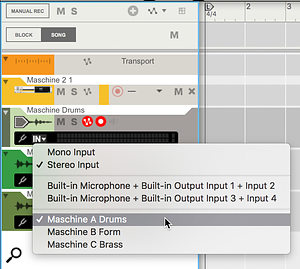 Screen 3: To record Maschine to audio tracks, enable its mixer channels as ‘Rec Sources’ and select them as track inputs.Any Maschine audio channels routed into the mixer can be recorded into audio tracks. To prepare for this you need to tick the ‘Record Source’ button in the mixer channel Rack devices. Next, create audio tracks for each source you wish to record, and assign their inputs accordingly. Once you’ve printed audio from a Maschine channel, both the record track and the input channel from Maschine will be live in the mixer, so you’ll want to mute the latter.

If you like to program your Maschine-based tracks in the Arranger, you can leave them running live in the project right through to the mix down stage. However, one of the reasons I love to use Maschine is that it’s such a spontaneous live performance environment. Nowadays I tend to ignore the Arranger and just set up Scenes and Lock states (automation and parameter snapshots) that can be triggered on the fly, along with Pad and Group mutes, performance effects, and so on.

Currently, the biggest gap in Maschine’s capabilities is the lack of any way to capture such a performance into Maschine’s timeline. But by hosting Maschine in Reason, you can record your on-the-fly beat arrangement as multitrack audio. This can then be further edited, or overdubbed alongside the rest of your Reason song arrangement.