Intel Macs: What Do They Mean For Musicians? 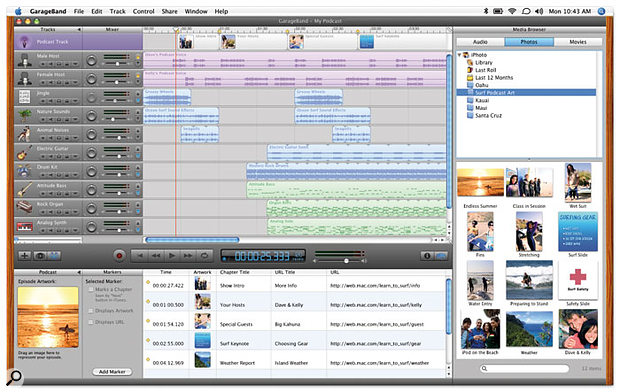 With new Podcasting features, Garage Band is beginning to look more like a general-purpose multimedia tool than an app specifically for musicians.

If 2003 was Apple's 'year of the notebook', 2006 is set to be the 'year of Intel', with the prospect that every Mac computer in the company's range will use an Intel processor by the end of it.

At the January Macworld show in San Francisco, Apple CEO Steve Jobs' first keynote of the year contained the usual blend of somewhat expected and somewhat unexpected announcements for the Mac community. Among the expected product introductions were the now annual updates to the iLife and iWork bundles. But while there was much speculation before the show about the introduction of an Intel-based Mac Mini featuring Apple's new Front Row software for consumer media, this turned out to be just a rumour.

iLife 06 features new versions of all the core applications, along with the addition of a new application called iWeb, which makes it easy to create web pages to share content created with iLife, such as movies, photos and music, as well as creating blogs. iPhoto 6 now supports up to 250,000 photos (up from 25,000) and seems to be much faster at handling large numbers of photos; there's also a neat way of publishing photo albums online (a technique Apple has termed Photocasting), and a full-screen mode for viewing and manipulating photos.

iMovie HD 6 now allows you to have multiple projects open simultaneously, and introduces the concept of themes, allowing you to use ready-made, Apple-designed templates to create a slick-looking video by dragging your custom video clips into a pre-defined format. There are new real-time video effects, thanks to Tiger's Core Video technology, and Apple have also improved audio support, with new effects, including a noise-reduction processor, and the ability to access Garage Band songs. iDVD 6 includes a feature called Magic iDVD, making it even easier to create a DVD-Video from scratch. It also supports widescreen format and offers a more detailed map view of a DVD's structure, similar to DVD Studio Pro.

Of most interest to music and audio enthusiasts will be Garage Band 3, which offers a new feature set aimed at making it easy to produce Podcasts. A Podcast track enables you to create a slide-show based on photos you have in iPhoto, and Garage Band makes it easy to automatically publish a Podcast online via iWeb integration. Garage Band 3 also adds the possibility of a movie track, enabling users to easily produce a score for iMovie projects. We'll cover these features in more detail next month, but on first inspection it seems that Apple have focused on turning Garage Band into a general-purpose multimedia audio tool, rather than adding any new features for composing or producing music. This is perhaps a shame, compared to previous releases, but on the other hand will almost certainly make Garage Band appeal to a broader audience than before.

A Leap Year For Mac Users

Despite the lack of an Intel-based Mac Mini, this wasn't a Macworld devoid of interesting new Mac hardware. After an update about Apple's relationship with Intel, which featured Intel CEO Paul Otellini appearing on stage in a cloud of smoke, dressed in one of Intel's engineer 'bunny' suits, to present a silicon wafer to Jobs, along with plenty of corporate back-patting, the Apple CEO did indeed announce the 'first Mac with Intel processor': a new iMac.

The new iMac is basically the same as the old iMac, except that it now features an Intel Core Duo processor instead of a G5 chip. Intel's Core processor family (previously known to the computer world by its Yonah code-name) was officially launched at the CES (Consumer Electronics Show) in Las Vegas a few days before Macworld, and is basically an evolution of the Pentium-M processor, a high-performance, low-power processor that has become extremely popular in laptop computers.

There are two main types of Core processor: Core Solo and Core Duo. The Core name, as you might be able to guess, is a reference to processor cores, meaning that Core Solo is a single-core processor, while Core Duo is dual-core. It's therefore pretty significant that the new iMac uses a Core Duo processor. Among the Core processor features of interest to those using music and audio applications will be support for SSE3 instructions (the Pentium-M previously supported only SSE2). When utilised by programmers, these can offer a tremendous performance boost for DSP. Long-time Mac users can think of SSE as the equivalent to the Altivec instructions (or Velocity Engine) found in the G4 and G5 processors.

Other improvements to the Intel iMac include a fast 667MHz system buss and ATI Radeon X1600 graphics with 128MB video memory. Otherwise, the pricing and other features of the iMac (such as the built-in iSight camera and Front Row) remain the same, and the new iMac is also available in both 17- and 20-inch models, which feature a 1.83 and 2GHz Core Duo processor respectively. Just as I was finishing this month's column, a brand new 17-inch iMac arrived on my desk, so we'll be delving into that in more detail next month.

Before the keynote, there were also rumours that a new iBook might be discussed, and while they also proved to be incorrect, Jobs pleased the crowd by adding the now-customary 'one more thing' to the keynote, commenting that "there's been this pesky little problem of the Powerbooks." He acknowledged the lack of a G5 Powerbook and rectified the omission with the introduction of the Macbook Pro, a new 15-inch laptop for professional users. In some ways it's a shame to see a brand like Powerbook disappear; Jobs noted that "it's a new name because we're kind of done with Power".

The Macbook Pro features a new 15.4-inch screen, supporting a resolution of 1400 x 900, that's apparently as bright as Apple's Cinema Displays, and offers a built-in iSight camera and a remote control with infra-red support, for using the bundled Front Row media software. It shares many specifications with the iMac, such as the 667MHz system buss and the ATI X1600 graphics, and is also available in two models. The first model costs £1429 and features a 1.67GHz Core Duo processor, 512MB RAM and an 80GB 5400RPM drive, while the high-end model costs £1779 and offers a 1.83GHz Core Duo, 1GB RAM, a 100GB 5400RPM drive and 256MB memory. There are, however, a few curious omissions, such as the lack of a Firewire 800 port (only one 400 port is offered). In addition, Apple have yet to reveal battery life.

In last December's Apple Notes we discussed the introduction of the dual-processor, dual-core Power Mac Quad system: the fastest Power Mac on the planet — and possibly, with the Intel transition and the eschewing of the word 'Power' in newer products, the last Power Mac ever to be released. I was able to play with one this month, and the first thing I noticed is that the power cable is now much thicker than before and uses a modified connector meaning, that you can't just plug in any old kettle lead (IEC lead, for our American readers), as before. 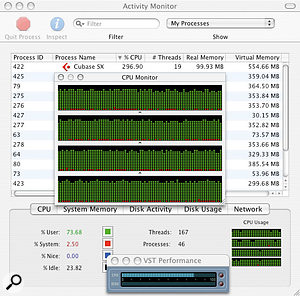 Activity Monitor reporting on how Cubase SX 3.1 is utilising system performances when running 128 instances of Reverb A. Notice that four processor graphs show the utilisation of the four processor cores in the Power Mac Quad.The other rear-end observations of note were that there's now an extra USB port (making three in total) and an additional Gigabit Ethernet port, and the Airport and Bluetooth antennae ports have disappeared. Given that there is now a new vertical blank plastic panel on the back of the computer, I'm guessing that the antennae for these wireless technologies has been incorporated into the beast itself.

In terms of performance, our usual Mac testing involves loading up Logic Pro and seeing how many instances of various plug-ins can be used simultaneously. Having already used music and audio software on dual-processor, dual-core Opteron systems, I feel it's not unreasonable to expect somewhere close to double the audio performance of a two-core system, with properly written software. However, when I tried the usual 'more Platinumverb s than you can shake a stick at' test, I only managed 160 instances — the same number as the dual-2.7GHz Power Mac tested in Apple Notes of July last year. Further inspection in the Activity Monitor utility confirmed an obvious conclusion: while the dual-2.7GHz machine ran 160 instances with 98 percent user usage, the Quad ran with 47 percent usage, meaning that Logic wasn't taking advantage of the two additional processor cores.

At the NAMM show, I asked an Apple representative about this, and he confirmed that Logic Pro hadn't yet been optimised for systems with more than two processor cores, since greater priority was given to the SSE optimisations to make the application run rather well on Intel chips. What this actually means is that while you should get a little extra power for the machine (you wouldn't have known the Quad was running 160 plug-ins, given the responsiveness of the user interface compared to the dual-2.7), Logic 's actual audio engine still only runs on two cores, so you won't get four cores worth of DSP power. Hopefully this will change in future versions of Logic, after the release of 7.2.

Although Logic doesn't yet take full advantage of the Power Mac Quad, Steinberg's Cubase SX 3.1 does; so I decided to see how many Reverb A instances I could run instead, since SOS has published many articles with Reverb A-related performance marks in the past. In this test I got to 128 instances, and this time, as you'll see from the screen shot, Activity Monitor reported approximately 75 percent CPU usage. This would suggest that Cubase was using three of the four cores, but you can see from the screenshot that the load is actually balanced across all cores.

Aside from the physical computers, the most important aspect of such a major architectural transition is the availability of supporting applications and drivers. iLife 06 is already shipping as a Universal Binary, along with iWork 06, and applications such as Mail and iChat that ship with OS X have also been ported successfully. At the Macworld keynote, Jobs mentioned that Apple's own 'Pro' applications (Logic Pro, Aperture and Final Cut Studio) will be available as Universal Binaries in March, and that a crossgrade to new versions will be available to existing users for $49 per title. This is perhaps a bit steep if you use all three, especially given that Emagic offered a freely downloadable OS X version of Logic to existing OS 9 users during the last major Apple transition.

At the recent NAMM show (just over a week after Macworld), Apple were showing the new Logic Pro 7.2 version — the first to be available as a Universal Binary — and announced that the upgrade would ship ahead of schedule in February. I was able to try this out briefly on a Macbook Pro at Apple's NAMM booth, and it seemed to be running pretty well: Logic 's mastermind, Dr. Gerhard Lengeling, mentioned that they had spent a great deal of time on the SSE optimisations.

The Macbook Pro itself looks similar to the existing 15-inch Powerbook, but you really notice the differences when the two are side by side. The new Macbook is sleeker, and the brighter, slightly larger (and more widescreen) display is really nice. Given the lacklustre performance of the G4 Powerbook at the moment, the Macbook will be welcomed by many mobile musicians, and it will be really interesting to see what Apple have planned for the Macbook revision of the current 12- and 17-inch Powerbook models later in the year.