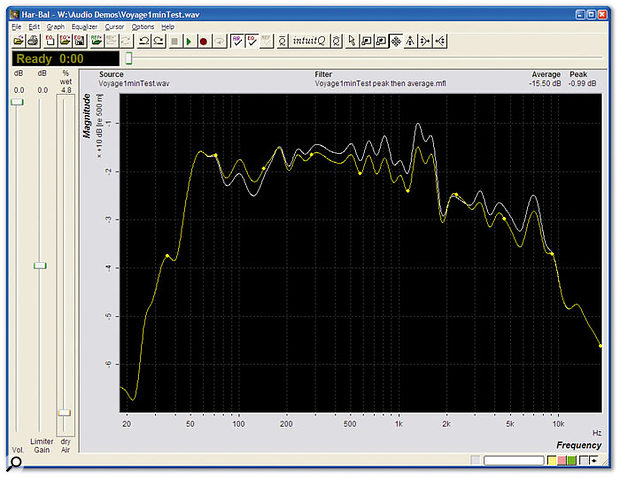 For instant mastering EQ gratification, take a look at Harbal 2.0. Here you can see how the new one-click IntuitQ function has automatically removed a low-end hole between 80 and 150Hz and reduced a slightly prominent mid-range area (the white trace is the 'before' spectrum and the yellow one shows the results after IntuitQ has been applied).

Can Harbal 's new automatic track EQ solve your equalisation problems with one click? We find out, as well as exploring the mysteries of the Windows Driver Model...

Back in SOS March 2004, I reviewed the PC-only Harbal (Harmonic Balancing) application, which provides a sophisticated way to add final tweaks to the EQ of otherwise finished tracks at the pre-mastering stage, by referencing them against well-mixed tracks in various genres. Unlike the majority of 'EQ rippers' that attempt to match the frequency content of a destination track to that of a source (often resulting in huge boosts at some frequencies, to compensate for differences in instrumentation or key changes), Harbal encourages a more considered approach.

I was impressed with its utilitarian yet highly usable and informative interface, and by how it allows users to learn by experience, compare their own mixes with commercial releases and educate their ears. The dedicated Harbal forums also provide users with plenty of feedback, plus techniques from professional audio engineers.

Nevertheless, some musicians still prefer instant gratification, so Harbal 's developers have donned their thinking caps and have spent some time working on a way to provide an automated solution to EQ problems. The result is Harbal 2.0, which incorporates two new features: IntuitQ and HB Air.

IntuitQ is essentially a one-click solution for EQ problems, yet it still avoids the trap of blindly forcing a track's frequency content to match that of some notional 'perfect response'. Instead, a single click on the 'Apply IntuitQ' button initiates a two-stage process that calculates the most appropriate modifications from the track itself, by reducing any prominent frequency bands and filling in any major holes that it finds.

The first stage smooths the average response to minimise masking effects (so that each instrument gets the best chance of being heard) and the second deals with any dominant peaks, to reduce harshness. You can also apply these stages individually, if you prefer, using the Average and Peak buttons situated on either side of the main IntuitQ button. The end result will be identical.

What IntuitQ won't attempt to do is change the basic sound of your mixes, nor try to completely iron out their characteristic peaks and dips, which is exactly as it should be — after all, if you've spent a long time trying to achieve a particular sound, you don't want it messed with unduly. So if your track is already well mixed and balanced, it's likely to receive only minor changes, while material that needs a bigger helping hand should get it: a boomy bass end might be reduced, a honky mid range or harsh top end improved, or frequency ranges boosted if they're too low in the mix.

This is exactly what a professional mastering engineer should do, and although no automated EQ algorithm is likely to produce perfect results every time on all types of material, I think the results are extremely good. Harbal 's developers recommend trying IntuitQ first, then using the result as a basis for further artistic tweaks. But, judging from the majority of tracks I tried it on, I suspect that many people will end up relying totally on IntuitQ. It gave me impressive results on a wide range of unreleased material, mostly providing clearer and better balanced mixes, even though the changes made were often of only a few dBs.

It's also great fun (and educational) to apply IntuitQ to commercial tracks, to see how much it changes them. On most of the commercial tracks I tried it with, tweaks of no more than a couple of dBs up or down, across two or three frequency bands, were made. A few tracks were altered by up to 5dB at one or more frequencies, mostly where the peaks created by a prominent snare sound dominated the mix.

I didn't always agree that the tweaked commercial tracks sounded better, but one of Harbal 's developers is a mastering engineer, so the current algorithm will, in part, be based on his personal artistic decisions. However, I think that Harbal 's goal "to automatically design near-optimum equalisation filters for any given track" has been met admirably. The algorithm only really works on complete tracks at the moment (it over-compensates somewhat on individual instruments or vocals), but it's an excellent tool to help during mixing and pre-mastering.

IntuitQ largely removes the need for the reference files in different genres used in previous versions of Harbal, although these are still useful for the Match Loudness function, so you can import another track (from your proposed album, or a commercial CD), create a reference file from it and then use it to establish a 'base camp' level for your other tracks. Harbal also has a built-in limiter to help you achieve louder tracks without 'squashing' dynamics.

The other main new feature in Harbal 2.0 is HB Air. This doesn't, as its name suggests, add exotic HF equalisation or upper harmonics. Instead, it uses the well-known stereo widening technique of mixing the 'L minus R' difference signal back into the mix to enhance its stereo width and make it sound more spacious. You have to be careful not to overdo it and cause harshness. I found that five or 10 percent on the amount slider was quite sufficient for opening out the mix a little, and using the In/Out button helps you to judge the optimum setting.

Harbal 2.0 also incorporates several smaller improvements, including a 'loop all' playback function, and various new keyboard shortcuts, but for me IntuitQ is the star of the show. Overall, version 2.0 is a huge step forward, since it not only provides the means to improve the sound of your mixes, but also has a very good stab at doing this automatically. I can see IntuitQ being controversial in some mastering circles, but in my opinion the results speak for themselves. Harbal 2.0 is £57.75 to new users, and the update is free from www.har-bal.com, for existing users.

It's often very handy to be able to select a whole bunch of files in Microsoft's Explorer and compress them into one by right-clicking on them and selecting the 'Send To Compressed (zipped) folder' option. However, many people haven't twigged how the file name is chosen for the resulting zip file. Once you've got your selection of files highlighted, simply point to the one whose name you'd like Windows to use, then use the right-click command, and your zip will use the main part of this file name, but will replace its extender with '.zip'.

I've noticed quite a few queries recently on the SOS PC Music forum that ultimately boil down to 'which is the most suitable driver type' for a particular audio application. After all, you can often get two or three options, and this can result in a lot of confusion, especially since Microsoft's WDM (Windows Driver Model) is not, as many musicians think, a type of driver, but a driver 'architecture'. It actually uses APIs (Application Programming Interfaces) to provide MME (Wave) and Direct Sound drivers, both with fairly high audio latency, along with KS (Kernel Streaming) support, which has much lower latency.

Both MME and Direct Sound provide multi-client functionality (so you can run several Windows audio applications, such as Media Player and Sound Recorder, simultaneously), support mono, stereo and multi-channel audio formats, play back MIDI files using the supplied Microsoft GS Wavetable SW Synth, and play back sample rates not directly supported by the audio interface. The last trick is accomplished by behind-the-scenes sample-rate conversion, which is why it's often safer to disable system sounds on a music PC, to prevent conversion cutting in without your knowledge. 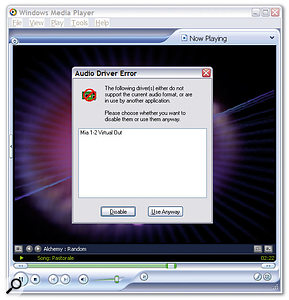 If you're already using the MME-WDM drivers of your audio interface and you attempt to open Sonar with its WDM/KS driver mode activated, you'll get an error message like the one shown here.This is all clever stuff, but it comes at a price. Mixing all these audio streams together relies on the 'KMixer' (Kernel Mixer), that requires at least three 10ms audio buffers. Thus MME drivers (normally displayed inside audio applications as MME-WDM, MME, Multimedia or Wave) normally impose at least 30ms of extra latency.

Some interface manufacturers, such as Echo, provide a special driver option that bypasses this Kernel Mixer to connect directly to the hardware beneath. Echo call their option 'Pure Wave', but although Direct Sound support is disabled as a result, you get a Pure Wave buffer setting that goes right down to a much lower 64 samples. For instance, inside Wavelab 5, the lowest setting I can manage with the standard MME-WDM drivers for my Echo Mia soundcard is about 120ms, but after switching them to their Pure Wave setting of 64 samples I can achieve 6ms.

Such special options are great for anyone who wants lower-latency Wave drivers for use with applications that don't support ASIO, like some versions of Acid, Cakewalk Pro Audio, Samplitude, SAW, Sound Forge and Vegas. However, if you're running an application, such as Sonar, that provides WDM/KS support, which also bypasses the Kernel Mixer, it's better to stick with the standard WDM drivers provided by the interface manufacturer and rely on the application to ensure low latency.

Bypassing the Kernel Mixer does have other implications. In Sonar, if you choose the low-latency WDM/KS driver you lose the ability to use Direct Sound or MME drivers at the same time, which also precludes using Microsoft's GS wavetable software synth as a MIDI playback device. Conversely, if you're already running any audio application that requires MME or Direct Sound drivers, Sonar won't be able to run its WDM/KS driver option.

Other driver formats, such as ASIO and GSIF, also use APIs and talk directly to the audio hardware, which is why they can also provide low latency. However, one of the biggest confusions for Cubase users is that, while this software only deals internally with its own ASIO protocol, Steinberg provide it with an 'ASIO Multimedia' driver and 'ASIO Direct X Full Duplex' driver that add MME and Direct Sound support respectively for interfaces that don't have true ASIO drivers. However, they remain Direct Sound and MME drivers underneath, which accounts for their relatively high latency. So, the best option for Cubase users is always a 'true' ASIO driver.

If your application offers both ASIO and WDM/KS driver options, the final choice is best made after practical tests, as relative performance may depend on the quality of each driver and may vary between manufacturers and models. I've found similar performance from both driver options with most review interfaces, although occasionally one driver format will manage lower latency than the other, or have a lower processor overhead. For instance, some Echo interface users running Sonar find that WDM/KS works better than ASIO.

The final caveat is that, since ASIO is now such a popular format, some manufacturers only release WDM drivers with limited I/O support. Echo's Audiofire WDM drivers, for instance, are limited to stereo in/out, while Emu's WDM drivers have recently gained multi-channel outputs but are still restricted to stereo inputs. In this situation, ASIO drivers are the only practical solution for Sonar users.