The Internet has been all a‑Twitter with the launch of the iPad recently. But what can this 'oversized iPhone' offer the recording musician? 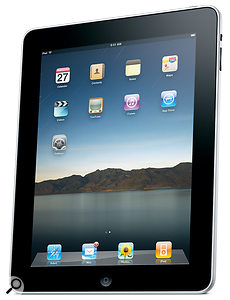 We all like a good rumour, but I couldn't help feeling deflated after the announcements made by Apple at their recent special event in San Francisco. I should have realised that it was unrealistic to expect Steve Jobs to announce everything that had been rumoured. Indeed, the rumour mill was turning so fast that the fact that Twitter did not bring down the Internet became a news item in its own right. "Last time there was this much excitement about a tablet, it had some commandments written on it” is something I wish I'd said first, but this quip belongs to the Wall Street Journal. Steve (so called by those of us who don't know him at all, but feel strangely close after all the presents he has given us) was relatively low‑key as he demonstrated the abilities of the new machine, relaxing on a couch for much of the demo as he held the Internet in the palm of his hand (or, rather, hands).

At one point he claimed that "Apple is a mobile devices company, that's what we do”. I think this may have been an honest admission from Jobs (so called by those of us who have never met him, but want to suggest a business‑like camaraderie) that this has been his ambition for the company ever since the early days. He went on to define this new device as something between a phone and a laptop, which had to be better than both of them. Let's all hope the iPhone OS, which this device uses, gets an update soon, so that the enhanced power of the device can be used to its full extent, not just displaying 'pixel‑doubled' iPhone apps.

And here's the recurring theme: Apple's business model appears to be built on frustration — computing nirvana dangled temptingly out of reach — so I was not surprised by what was left out. An obvious omission is a camera; this device would be ideal for video conferencing via iChat or any third‑party apps, such as Skype. But the hope at the moment is that third‑party vendors will create an external camera that connects via the regular 30‑pin iPod‑style USB connector. At least the iPad has a microphone and, although there was no demonstration of handwriting conversion to text, presumably voice‑to‑text conversion will soon be appearing in the app store. As far as music is concerned, I have to say this device looks like it was designed for TouchOSC and any of the other touch‑sensitive interactive software controllers being developed. How long before Novation's Launchpad appears as an iPhone app? 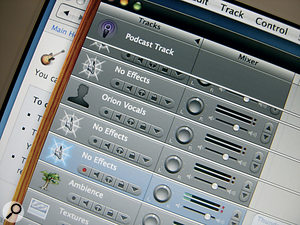 Developing iPad‑compatible versions of GarageBand and Logic is, technically, a real possibility with up to 64GB Flash storage available. Enabling streaming to a home server or access to on-line resources would allow the device to become more of a 'controller'.Photo: Andy Melton / Flickr

With up to 64GB Flash storage and a 1GHz A4 processor, music creation as we know it will not be too frustrating an experience on this device. Presumably, a new version of iLife (not announced at this event, despite being heavily trailed) will include an update to GarageBand with compatibility for the iPad. Maybe Apple will push the envelope here, allowing streaming backwards and forwards to a home server with loops installed, or even web access to the resources that make it so easy to 'create' using GarageBand. This would allow the device to be more of a 'controller' than a computer in its own right. How about versions of GarageBand (or even Logic Pro) that come with low‑definition versions of the resources that can be stored locally (on the iPad itself), taking up far less room and processor overhead, which would then be updated automatically to high‑resolution versions when the project is transferred to a 'proper' computer? You see how it works: we always want more. Perhaps that's the reason for the twinkle in Jobs' eye (aside from the $15.68 billion quarterly revenue, that is).

The flip side of the frustration that comes with Apple's way of doing things is that their considered approach results in the release of a fully working product. So they sat back and watched as Blackberry and Palm messed about with PDAs and pointy sticks, and then gave us the iPhone. Did they let Digidesign steal a march with Elastic Audio? Or did they simply wait and see what the Pro Tools guys came up with, then make Logic Pro's Flex Time so easy to use that it's as if it's always been there? Then they sat back and watched the e‑book makers and the netbook manufacturers, before bringing out the iPad with a fully integrated iBook Store. I'll bet Apple had a good chuckle when they saw Steve Ballmer (and you'll note that I refer to him neither as Steve, nor Ballmer) demonstrating 'slates' a few weeks earlier.

I suppose what worried your faithful columnist the most about the presentation was that quotation concerning mobile devices. Yes, Apple make some great professional computing equipment, but it feels more and more as though these are stranded in a backwater, perhaps in danger of being cut off altogether from the rushing torrent that their core business is becoming.

Already available on the iPhone, two examples of the kind of content that will make the iPad indispensable as a learning tool for audio are MacProVideo's N.E.D.i and MakeMoreMusic's GarageBand Essentials (both from the iTunes Store). N.E.D.i (v2.1) allows subscribers to sync and stream downloaded tutorials (you can sample a free example about Logic Pro's 64‑bit performance at http://www.macprovideo.com/tutorial/logic107), while GarageBand Essentials (volumes 1 and 2) gives you 10 tutorials — over an hour's footage — for £1.19$1.99 per volume.