Logic Pro: Getting The Most Out Of Sculpture Skip to main content

Logic Pro: Getting The Most Out Of Sculpture

The creation of successful physical models of acoustic instruments has long been a kind of Holy Grail amongst software synthesists. Of course, there have been some successes in the modelling world; analogue synthesizers were probably the first to be cracked in a successful manner, and the modelled pianos from the likes of True Pianos and the orchestral instrument from Synful do sound excellent. But with these types of modelled instrument, the basic elements of the sound‑generating core are mostly pre-defined, with few avenues for the experimentalist to explore. Logic Pro, on the other hand, comes with an extremely sophisticated modelling synthesizer called Sculpture, which allows synthesists to get their hands dirty by adjusting the fundamental parameters that describe the instrument's physical model. In Sculpture's case this is, basically, a string. Most Logic Pro users will have explored, and some will have used, Sculpture's complex and evolving preset sounds. But few will have delved deep into programming, because on first glance the thing looks incredibly complicated.

However, if you separate out the physical-modelling section from the 'standard' synthesizer controls, such as filters, envelope generators, LFOs, the Waveshaper (a kind of distortion) and other controllers 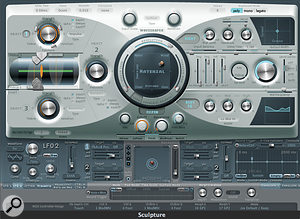 Looking at the features that appear to the top left, Sculpture appears to be a fairly traditional synthesizer. However, it includes enough powerful sound-generation tools to make it an extremely flexible addition to your sonic arsenal., you'll see that Sculpture is, effectively, a traditional synthesizer, albeit with a unique sound-generation component. This sound then passes through all the normal synth gubbins, along with a few features unique to Sculpture. I doubt if Sculpture's modelled guitar, strings, flutes and percussion are going to give sampled libraries a run for their money, but if you re‑imagine Sculpture as a powerful digital synthesizer with an extremely flexible sound-generation system, you soon see that it's a useful addition to your sonic arsenal and a way to help stop your compositions from sounding 'generic Logic Pro'.

'Randomising' the elements of an existing preset is a good way to get started with Sculpture.to change it a bit. If you press Ctrl, then click on the 'Rnd' button, you'll see a menu, from which you can choose which parameters to randomise. Then you can use the 'Int' slider to set the amount of change. This won't reveal much about how Sculpture actually works, though, so loading in the 000 default preset (from the Tutorials menu) is a better way to begin to get better acquainted with the instrument. If you press Ctrl and click on the green bar in the Pickup section, you can enable the string animation, which helps visualise the type of sound you're trying to synthesize.

By moving the ball in the Material section, 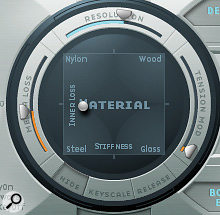 To get a handle on the kinds of sounds Sculpture is capable of producing, try moving the ball around the Material section. The four corners are labelled with the sort of timbres you can expect to hear.you can immediately get a feel for what kind of basic timbres Sculpture is capable of generating. Confusingly, Apple calls the modelled generating parameter a 'String', even though it can be used to generate blown and metallic timbres as well. More helpfully, though, they have labelled the four corners of the Material box with useful indications of the type of timbre you can expect to hear, so you can listen to the raw modelled sounds if you drop the joystick ball into each. Like all of Logic Pro's parameters, the ball's position can be automated, which provides a simple way to move between quite different timbres as a song progresses. Moving the ball around the 'X' and 'Y' axes of the Material square modifies the stiffness, damping and harmonic content of the modelled string, which is why, as you move the ball around, both the timbre and pitch changes. If you move the ball to the top left, you'll see why it's labelled Nylon — the timbre takes on the rubbery nature of a nylon string — and the three other basic models are also true to their names. You could equate this section of the instrument to the oscillators of an analogue synthesizer and, when processed through Sculpture's powerful filters and flexible modulators, it can generate interesting textures on its own.

But Sculpture also allows you to vary the way the modelled strings behave in quite extreme ways. The tones created in this section can be modified at a fundamental level by using the three Object controls. Indeed, one of these has to be 'on' and the Strength knob has to be set at some value above zero for you to get any sound at all.

The Timbre and Variation control's actions depend on the setting of the Excite types, chosen from the drop‑down menu. All three Objects can be combined to warp the basic modelled string timbre and each Object features different Excite types. So you could combine Plucked, Bowed and Disturb, for example, which is great for introducing distortion into the sound, and you can alter how much each Object affects the sound via the Strength knob.

The final modifier in the tone-generating section of Sculpture is the Pickup section.

The Pickup section offers some sophisticated modelling possibilities. This works in much the same way as an actual guitar pickup would, even including a phase (polarity) invert switch, as found on some guitars. Using the Pickup feature does take a little experimentation, however, as the relationship of the Pickup's position to the produced tone isn't always obvious. Again, there's some sophisticated modelling mathematics going on here that relate to pickup position and the relationship of the Object to these, but all you really need to know is that changing the Pickup and Object positions — by dragging them across the green String display — will modify their tone in exactly the same way as if you were to reposition a guitar pickup. There's even a phase invert button, just like on some guitars. However, the relationship of Pickup position to tone isn't always obvious, so some experimentation is needed. The Pickup Spread control (to the right of the Material section) is, confusingly, adjusted by dragging the mouse up and down over the 'Pickup' text. This places the two different Pickups apart in the stereo field.

You may have noticed that some of the displays for the parameters show an orange line or curve when you adjust them. This tells you they can be controlled by Sculpture's Morph 'joystick' section, which works in a similar fashion to Korg Wavestation's vector synthesizer when it sweeps through waveforms.

The Morph pad has five points: A, B, C, D and a central circle. Sculpture's 'Morphable' parameters can be stored at each of these points and can be seamlessly recalled by moving the ball across the five Morph points. features five 'Morph points', four situated at its corners and labelled A, B, C and D, and the fifth the centre circle. Each position can store a complete snapshot of Sculpture's 'Morphable' parameters and, if you click on each position in turn and change any of the 'Morphable' parameters, this snapshot of the current settings will be stored at each location. If you subsequently move the ball over these Morph points you'll see (and hear) the values of the parameters that you've stored change seamlessly from one to the next.

The ball can also be controlled via MIDI controllers — a joystick being the most obvious choice — and the Morph envelope. If you select one of the envelope record trigger modes and click on the small 'R', moving the ball at the centre of the Morph square will generate the Morph envelope. Clicking on the Env button in the Envelope display will reveal the stored Morph points on the Morph pad as well as the Env display itself, and playing a note will sequence through each of these, with the progress being tracked by a small red dot. The time between Morph points can be adjusted directly by dragging them onto the Envelope display, and the position of Morph points on the pad can be repositioned by dragging with the mouse. The Randomisation feature can also be used with the Morph points. Just select the number of Morph points to be randomised using the small boxes to the left of the pad, adjust the Rnd slider for the intensity of the effect, and click on 'Rnd'.

Though this short tutorial can't hope to fully cover Sculpture's rich parameters, interface and modulation options, it should be useful as a jumping‑off point for exploration. With complex instruments like these, it's easier to get your head around the basics if you disable parameters you're familiar with — such as filters and delay — and concentrate on fundamental sound‑generation components. Once you've done this, Sculpture becomes less like a complex maths examination and more like a sophisticated digital synthesis engine, and should enable you to generate sounds that are original and usable.