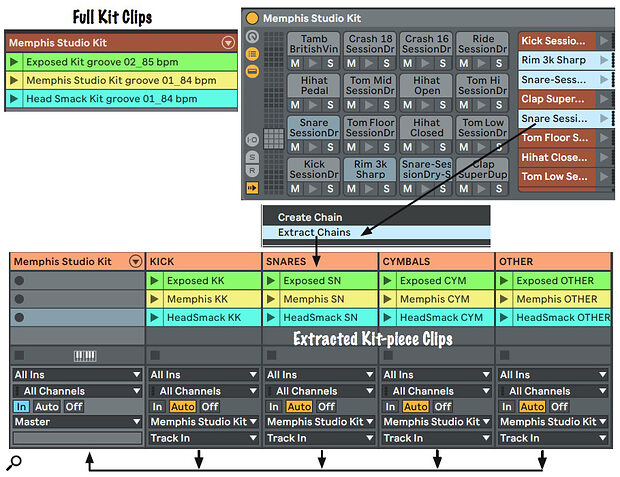 Screen 1: Three drum clips are separated into four parts and routed to a new track for playing and recording.

Live’s Arrangement view is similar to most DAWs in its approach to arranging sections of a song along a timeline with a separate track for each part. By contrast, Live’s Session view abandons the timeline and allows you to simply trigger individual looping or one‑shot clips of any length. To make that useful for both performance and sketching, Live lets you organise your clips in horizontal rows called Scenes and provides tools for simultaneously triggering some or all of the clips in a Scene. In this column we’ll look at using Session view to sketch out new ideas as well as to edit segments of your existing arrangements.

Let’s start with building a drum track. Live’s library is filled with Drum Racks (instruments with multiple drum sounds mapped to individual MIDI notes) and MIDI clips for playing them. Our example uses the Memphis Studio Kit Drum Rack and three MIDI clips, all from the Drum Essentials Pack included with the Standard and Suite editions of Live.

The first step is to create a new Live set ‑ somewhere between 60 and 90 bpm is a good choice of tempo. Insert the Memphis Studio Kit (from the Pack’s Drums/Acoustic folder) on a MIDI track. Drag these three MIDI clips from the 60 to 90 bpm subfolder in the Pack’s MIDI Clips folder to adjacent Session view clip slots on the Drum Rack track: Exposed Kit groove 02 (2 bars), Head Smack Kit groove 01 (1 bar) and Memphis Studio Kit groove 01 (2 bars). The next step is to split each of the MIDI clips into several clips playing different kit pieces. You could simply copy the clips and manually delete the unwanted notes in each clip, but Live offers a less tedious solution. Reveal the Drum Rack’s Chain List in Live’s Device view, Control/Command‑click to select each of the kit‑piece chains you want to split off and then right‑click one of the selected chains and choose ‘Extract Chains’ from the menu that appears. That will generate a new MIDI track with a copy of each of the clips modified to play only the kit‑pieces for the selected chains. The corresponding note‑chains will have been deleted from the original Drum Rack and the new track will hold a Drum Rack with only those chains. Repeat as needed until you have separate tracks and clips for several groups of kit pieces.

In Screen 1 (above), I’ve extracted separate tracks for the kicks (one kit‑piece), the snares (three kit‑pieces) and the cymbals (six kit‑pieces). The original track now plays the remaining six kit‑pieces of the original 16 kit‑piece Drum Rack — clap, tambourine and four toms. If you launch all the clips in any Scene (row) you’ll hear something similar to the original clip. The difference is that only the original track holds the audio effects section of the Drum Rack — the other tracks are ‘dry’. For our purposes, the easiest fix is to delete the Drum Rack on each of the tracks (original and extracted), insert a new instance of the full Memphis Studio Kit Drum Rack on a new MIDI track and then route the four MIDI tracks holding the clips to the new track. (When you do that, the MIDI clips will still show the destination kit‑piece names.) We’re now set up for the next step: shuffling the new kit‑piece clips to produce multiple, longer drum tracks. 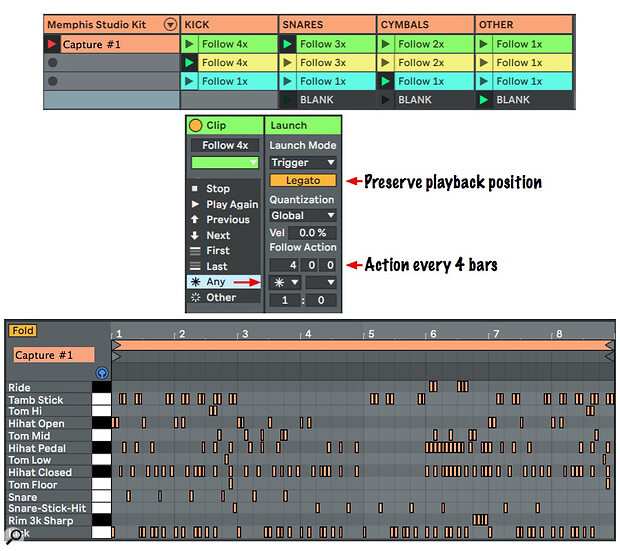 Screen 2: The MIDI clip at the bottom captures eight bars of Follow Action playback of the four kit‑piece tracks.

In Screen 2, I’ve set up Follow Actions for the extracted kit‑piece clips and also turned on the Legato button for each of the clips to ensure that they stay in sync — so that, whenever possible, playback begins in the following clip at the same position it stopped in the clip being followed. Choosing the ‘Any’ Follow Action ensures that a clip can be followed by any of the clips on its track, which makes all the clips on the track equally likely to be triggered. The clips labelled ‘BLANK’ added to the ‘SNARES’, ‘CYMBALS’ and ‘OTHER’ tracks allow each of those parts to drop out occasionally, whereas the kick part never drops out. (Adding more Blank clips on the same track will increase the probability of dropouts.) In order to add a bit more variety, I’ve set the time for the Follow Actions in the first two Scenes to 4, 3, 2 and 1 bars respectively for the kick, snare, cymbals and ‘other’ clips (that is the main reason for turning Legato on). The third Scene’s clips’ Follow times are all 1 bar.

In Screen 2, I’ve captured one eight‑bar clip on the drum kit track, but longer captured clips offer more variety. Each time you capture, you’ll get something different, and starting captures by triggering different Scenes will also add variety. Some captures will be better than others, but with even a few captures, you’ll get lots of usable material. 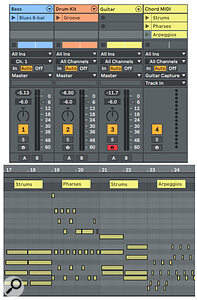 Screen 3: The bass, drum and guitar blues arrangement at the bottom starts with eight‑bar guitar clips in three styles. Use Follow Actions or manually trigger the guitar clips.

You can use the same process to alter a drum track in an existing arrangement. The first step is to select the drum track in Arrangement view and extract the kit pieces as described above. You’ll now have several drum tracks with different Drum Racks, so delete those Drum Racks and create a new track with the original Drum Rack and route the new tracks to it. At this point you can slice the clips on the extracted drum tracks into small pieces and swap them around by hand in Arrangement view. Or, you can replicate the above Session view solution by selecting consecutive time segments on any track, right‑clicking and choosing Consolidate Time to New Scene from the menu that appears. Now, switch to Session view and set up Follow Actions for the drum clips in the extracted Scenes, trigger the Scenes and capture the results in clip slots on the new Drum Rack track. Redo or edit each captured clip as needed and then drag it back to the Scene’s original position in Arrangement view. You’ll typically be working with longer MIDI drum clips with this approach, but the Follow Action times provide the variety.

You can use this rearranging technique on most types of material. When the material is part of a harmonic sequence like the guitar part shown in Screen 3, the clips you’re mixing should be the full length of the harmonic sequence and in Legato mode to keep the harmonies in sync. You can again trigger random sequences using Follow Actions, but in this case you may want to have more of a hand in the outcome by triggering the clips manually with either the mouse or a button box. You can also combine the two methods. In Screen 3, I’ve manually triggered the Phrases and Arpeggios clips but used Follow Actions to return to the Strums clip after a couple of bars. You can capture the results in a Session view clip as in the drum example or record the capture clip in Arrangement view by triggering Live’s Record and Play transport buttons. 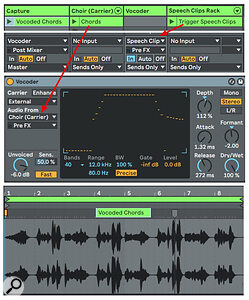 Screen 4: The vocoder and its two inputs, carrier and modulated, occupy the last three tracks and a first audio track is used to capture the vocoder’s output.

You can also use this technique to capture audio effects. Screen 4 shows a setup for capturing a wordless choir vocoded by speech clips to accompany the arrangement from Screen 3.

The vocoder’s output is captured on the leftmost audio track and shown at the bottom of Screen 4. The three source tracks’ outputs are set to Sends Only to keep them out of the mix. The setup is simpler for single‑input audio effects. If the effect’s source is also part of your song, insert the effect on its own track. Otherwise, add it to the source track. Either way, capture the track’s output on a separate track.