Liven Up Your Drum Loops, Part 3 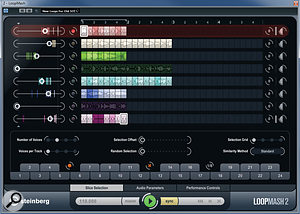 LoopMash caused quite a stir when released with Cubase 5, but it was significantly improved with LoopMash 2 in Cubase 6. While LoopMash's primary function is — well, the mashing of loops, obviously — it's also useful for other loop-based tasks, and that makes it ideal for refreshing your tired old loops. So let's get mashed...

We took a brief look at LoopMash back in SOS October 2009, and the basic principles of operation remain the same, so I won't re-tread that ground in detail here. Instead, following a basic refresher of Loopmash's main function, we'll focus on some of the more creative possibilities the updated version presents.

Essentially, LoopMash is designed to 'mash' loops together by combining beats from one or more loops into an overall rhythmic pattern defined by a master loop. You slice sounds from up to seven other loops, and layer these over the master loop. Loopmash finds elements in these loops that are in some way sonically similar to slices in the master loop, and these similar slices are then triggered as the master loop plays back. How much emphasis LoopMash places on any of the other seven loops (that is, their relative 'similarity' to sounds in the master loop), how many slices can be triggered simultaneously, and the relative volumes of slices from each loop, are all controllable by the user.

If you've catalogued all your audio loops using MediaBay, as suggested in the first part of this series (in SOS September 2011), you should be able to drag and drop from there, or from the Project window, onto an empty track in LoopMash. LoopMash will usually do a decent job of recognising the loop length and tempo before slicing the loop, although I still experience the occasional glitch in this process, and find that temporarily changing the project tempo to match that of the loop before doing the drag and drop can provide a workaround in the event of problems.

The master track is identified by the lit button immediately to the left of the waveform display. Overall control of which of the additional loops might supply slices to complement the master track is set via the Similarity gain-sliders on the left of the display. A number of other performance controls remain the same as in the original LoopMash — and the Cubase 6 Plug-in Reference PDF does a much improved job of explaining how these various controls interact to create a particular 'mash'.

Even the shortest exploration of the supplied presets demonstrates that LoopMash is capable of performing fabulous loop mangling. However, as discussed earlier in this series, sometimes you need to be able to take sounds from a key loop or two to build your own variations, or add extra beats over an existing loop. Usefully, once loops are sliced inside LoopMash, individual slices can be auditioned (simply click on the slice) and then simply dragged and dropped on to Groove Agent One pad, so that additional hits can be triggered via MIDI notes. This process works very well and the only down side is that the rather wonderful slice-selection modifiers (described below) are not carried across. Maybe this is something that could be added in a future update (please!).

In essence, I suppose that this is not that far removed from the sort of drum replacement that can be achieved by combining beat slicing in the Audio Editor and dragging-and-dropping slices into GAO, as discussed earlier in this series. By default, LoopMash does this drum replacement in a 'with bells on' fashion, but with a few setting tweaks a more straightforward sound replacement job is possible.

Once you've identified your master loop and a loop (or loops) containing the sounds you want to use, you'll need to get busy with some of the slice-selection modifiers. Right-clicking on a slice opens a menu containing a large number of these modifiers, but for this task the most useful options are Always, Always Solo (both of which are only available on the master track), Exclude and Boost. Selecting one of these applies the modifier to the current slice, and a small icon is placed on the slice to indicate which modifier is being used.

For simple drum-replacement, the trick is to first use Exclude on both the master and other track(s), so that LoopMash ignores any slices with sounds you don't want to use, and then use Always or Always Solo on your master track slices for any sounds you want to retain. This allows LoopMash to focus in on just the sounds you want to use. If you then decide you want to hear more of a particular sound, you can also apply the Boost modifier to that slice.

Finally, you simply adjust the standard LoopMash controls for wet/dry mix, track similarity, track volume, and so on. Hopefully, the result will be a loop that is rhythmically the same as your master track but which features a replacement sound set. Given the way LoopMash does its similarity processing, the results are not as predictable as with a more conventional approach to drum replacement — but, in creative terms, I find that this is actually half the fun, as there's potential for happy accidents!

...and its Performance Controls tab reveals plenty of fun options for live tweaking of your loops!

Simply mixing and matching loops with the similarity sliders, and varying the global controls under the Slice Selection and Audio Performance tabs, provides a wealth of 'mashing' possibilities. There are some options here that are new in Cubase 6, but for some genuine 'ear candy', the other slice modifiers and the Performance Controls are the best of the new LoopMash features.

As with the Always and Exclude slice-modifiers mentioned above, the remaining slice-selection modifiers operate at the level of an individual slice. These include mute, reverse, staccato, scratch, backspin and various types of stutter, slur and tape effects. While only one such modifier can be applied to a slice at any one time, they're stored as part of one of LoopMash's 24 scenes for easy recall. You might, example, create several identical scenes based on the same loops and then apply different slice modifiers to each scene, switching between the scenes during playback (either by clicking on the scene pads or via the MIDI key range C0 to B1), to create variations on your loop.

A similar range of effects is available via the excellent Performance Controls, but these are applied across the whole of LoopMash's output, rather than to individual slices. As their name suggests, these are intended to be 'played' (via the on-screen buttons or MIDI key range C3 to G#4). Any fan of electronic processing of drum patterns will have a lot of fun with this.

I've deliberately focused on using drum loops through this short series, but it's well worth me saying that all of these tools can easily be used to breathe new life into loops of other sounds as well. Bass loops make a particularly good target: you can achieve great results from something as simple as grabbing an individual note from a loop as a slice, and then re-pitching it in a sampler plug-in so that you can play in a variation on the original bass line. Indeed, given that Groove Agent One allows you to adjust the pitch of samples held on a pad, this is perfectly possible using just the tools that we've discussed in this mini-series. LoopMash also has plenty to offer in this instance: just load a couple of different bass loops and see what happens as you adjust the similarity sliders. You might be pleasantly surprised!

It's not my intention to stop you buying commercial loop libraries, but I hope you won't feel the need to buy them out of boredom with your existing loop collection — because this short series should have shown you that Cubase includes an excellent set of tools for making more from whatever loops you have at your disposal.

Coming To The Third Party

The Sample Editor/Groove Agent One (GAO) combination for generating sliced drum loops and MIDI files described earlier in this series has only been available since GAO was introduced in Cubase 5. If you're using an earlier version of Cubase, and don't have access to something like Kontakt, Stylus RMX or Phatmatik Pro (all of which provide their own takes on this process), there are some freebie options. UVI Workstation (www.uvisoundsource.com), for example, is available for both Mac and PC. It offers the ability to slice WAV and REX audio loops and then drag and drop a MIDI file back into your host to trigger the slices. Unfortunately, there's no way to drag and drop individual audio slices from the loops to use in a drum sampler, but this could easily be worked around by recording individual drum hits to an audio track and working with these.