The Direction Mixer in Logic Pro not only helps reposition stereo audio, but can also decode M/S recordings.

It's likely that your Logic Pro Projects will consist of dozens of tracks, and just as likely that many of these tracks will have been recorded in stereo. It will, therefore, come as no surprise that Logic Pro contains useful tools for the playback and manipulation of everything stereo.

Don't Interleave Me This Way

The humble Channel Strip is capable of replaying mono or stereo (or, indeed surround) files. However, in its default state, it will only play back interleaved stereo files — the kind where both left and right channels are contained within a single file. This, in Logic Pro parlance, is called 'Universal Track Mode' and it's set from the main Audio Preferences Window. 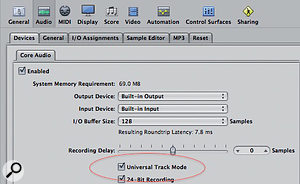 You'd normally turn this off only if you were using split stereo files (ie. stereo recordings presented as two files with '.L' and '.R' extensions) such as those generated by Pro Tools. Having spent many a happy hour trying to locate the missing left part of a stereo file in my old Digidesign days, the ability to use interleaved files is mostly a blessing. It does, however, mean you can't directly treat the left and right sides of a stereo recording with separate effects, for example — though there are ways around this limitation, as we'll see later.

Because Logic Pro's Pan control only adjusts the balance between the left and right channels, you can't use it to define exactly where the 'phantom' centre image should be located or how wide the stereo spread should be. For more precise adjustment, it's better to use the Direction mixer plug-in.

The plug-in's Direction knob places the centre of the audio at the required position in the stereo field, while the Spread slider changes the width of the stereo image — though you'll have to be careful of phase cancellations when setting it to zero to create a mono track. I like to use the Direction Mixer with Hammond organs, as it allows me to accurately position the recording in the stereo field, while keeping some of the stereo sweeping effect that gives the Leslie speaker its distinctive sound. This allows you to give listeners the impression that the organ was recorded in a fixed position in the stereo field, much like it would be if you recorded a whole band with a stereo microphone setup where the organ was off to one side. The Direction Mixer also has another trick up its sleeve: the processing of Mid/Side recordings.

Mid/Side recording techniques have been comprehensively covered by Sound On Sound elsewhere (/sos/nov10/articles/stereoprocessing.htm) 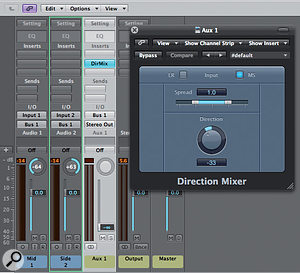 Using the Direction Mixer's M/S decoder with two separate mono recordings., so for the purposes of this Logic workshop, I'll only cover issues relating to decoding in Logic. With a Mid/Side (M/S) recording, one channel is usually captured using a microphone with a cardioid polar pattern (the 'Mid') — though any pattern can be used — pointed directly at the sound source, and the other with a microphone set to a figure-of-eight pattern (the 'Sides') aligned at 90 degrees to the Mid microphone. The beauty of this technique is that you always get a solid mono centre image from the Mid microphone, along with complete control over the centre position and spread of the stereo image and, as an extra bonus, it also sums to mono without phase issues. It can appear to be a complicated technique, but the 'decoding' of M/S recordings is easily performed in Logic Pro using the Direction Mixer. To get this to work, you need to record the two M/S microphones onto a single stereo track, with the Mid microphone routed to the left channel and the Side microphone routed to the right. This plug-in effectively centres the left Mid channel and splits the right Side channel into two, routing one to a hard left pan, the other routing hard right with its phase inverted. These two channels are then mixed with the Mid channel to produce a true stereo image.

To use the Direction Mixer to decode M/S recordings, simply insert it onto the stereo playback track and click on the MS button. 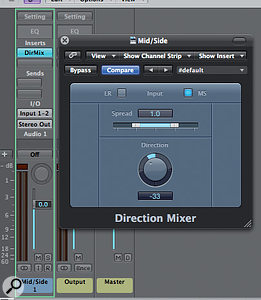 With an M/S-decoded track, the Direction Mixer's Direction and Spread controls work in exactly the same way as described earlier, except that when the Spread control is at zero, there'll be no possibility of phase issues, as the Side channel and its polarity-inverted copy are cancelled out completely, leaving the Mid microphone to supply the mono recording.

In The Heat Of The Moment 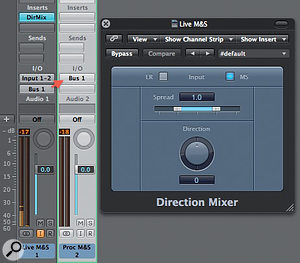 Routing setup for the live monitoring and capture of M/S recordings. But if you want to record the M/S input decoded to L/R, you'll have to route the audio via a bus to the input of a second audio track and set this to record instead. To get this to work, you'll need to set the first Channel Strip to Input Monitor Only (by clicking on the 'I' icon) to get the audio through to the second audio track (which you'll need to mute or set to no output to avoid hearing the audio twice). If you click on the 'R' icon on the first Channel Strip instead, you'll capture an undecoded M/S recording as well.

I often use a portable recorder that only creates interleaved stereo files, but sometimes I want to treat left and right channels separately. For example, I might need to EQ or compress just the right-hand channel, to deal with a guitar on the right side of the stage differently to the one that was playing on the left. Logic Pro's Channel Strip allows you to select various playback modes by clicking and holding on the icon below the fader. To treat each side of an interleaved stereo recording separately, just copy the interleaved region to a second Channel Strip and have the original play back the left side only and the copy play back the right.

Laying Down The Law

Logic Pro allows you to change the behaviour of its pan controls by offering three Pan Law settings in the Project Audio settings window, which you'll find in the main File menu: 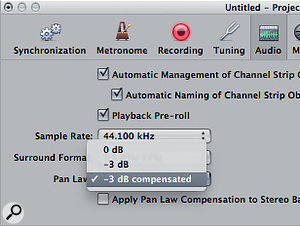 Normally, of course, this is most relevant to mono tracks being panned in a stereo mix. However, the 'Apply Pan Law Compensation to Stereo Balancers' tick-box extends the Pan Law setting to all Logic Pro plug-ins that affect the stereo balance, including the Direction Mixer.