We speculate on Apple's direction for music, as revealed by the launch of the new Logic Studio suite.

After only two incremental upgrades to the previous version, the new Logic Studio 9 has been released [see our review elsewhere in this issue]. The previous suite of applications found plenty of high‑profile users, and Apple's commitment to "empower the masses” (their words!) continues with the new Logic Studio, which contains Logic Pro 9, MainStage 2 and SoundTrack Pro 3. Compressor (now version 3.5) and WaveBurner (now version 1.6) are still included, and the creative content now includes the Voices Jam Pack, as well as 450 'warped' impulse responses for Space Designer, and new presets and channel strip settings exploiting the new plug‑ins

Put Your Foot Down

Logic Pro 9's new Pedalboard plug‑in showing a range of stomp‑boxes, some familiar from Garageband's complement of 10, and some new from Logic's expanded range of 30.

The new Amp Designer and Pedalboard plug‑ins are great news for guitar players and those wishing to record guitar, and the integration with the Apogee GiO footpedal, which is also an audio interface, is a good solution for guitarists who want to become fully computer‑based. As a long‑time abuser of wah‑wah, I'd like to have seen a built‑in expression pedal, but this can, of course, be added in the usual way.

The 'Convert Regions to New Sampler Track' and Drum Replacement tools further underline Apple's commitment to empower the musician, but engineers should find much to admire in Flex Time, which allows Beat Detective‑style region manipulation and Elastic Audio‑style transient detection and time‑stretching routines, cleverly integrated into the same environment. As well as the usual 'fixing' routines, this allows for some highly creative effects, but it seems a shame that pitch‑manipulation tools are not included. At the recent press launch, Apple were justly proud of the guitar‑based improvements in Logic Pro 9, and the integration with MainStage 2, which can now play back files exported from Logic, as well as loops and audio files, making it a much more realistic proposition as a live tool for regular working musicians. They are just in time for a head‑to‑head with Propellerheads' Record, which integrates the amp models and effects of Line 6 guitar units into the production environment when they are plugged in via USB. Propellerheads have been busy hooking potential users in by giving away free codes for the pre‑release 'beta' (expiring September 9th). Looks like the new Logic Studio arrived in the nick of time!

GarageBand 5.1 is a recent update that fixes the security problems the software previously caused with Safari and allows the addition of track effects and audio units to guitar tracks. GarageBand is a supremely capable application in its own right (as well as providing simple routes into music sequencing and recording for the less experienced), and the links with Logic Pro have now been re‑established, with the applications now looking and feeling even more like versions of each other. Logic 9 was even nicknamed 'GarageBand Pro' by some industry pundits prior to its release!

It was interesting to note at the press launch that the demo was done on a MacBook Pro. Logic Studio is undoubtedly a suite of pro applications, but there appears to be a change of emphasis to include the wider 'prosumer' market, the GarageBand user looking for more advanced features, and the artist looking to self‑produce. With Apple's knowledge of the developing marketplace that is the music industry, this might be a really smart move positioning Logic as the premier creative production tool on the Mac. 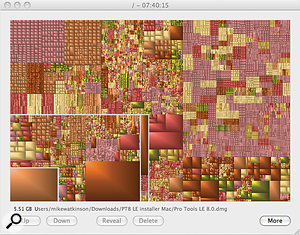 Installing the new Logic Studio and its 50GB of content was a reminder that I should look at what's taking up space on my drive, and delete and/or archive what I'm not using. In the event, only about 10GB was needed (despite the installation dialogue's warning that 18GB was required), as I was 'merely' updating from the previous version. Even so, deleting and archiving is an important maintenance routine that should be carried out once in a while, especially as disks get larger and larger, encouraging us to accumulate all sorts of potentially performance‑sapping data. Two applications are very handy here. The first is the majestically titled GrandPerspective (free from http://grandperspectiv.sourceforge.net).

Having analysed the chosen disks or folder, this application shows file size represented as area. The larger the file, the larger the rectangle. Rolling over each rectangle tells you what it is and its path, so I was very quickly able to find that 5.5GB of space on my drive was being taken up by an old ProTools installer, which I was happy to consign to the archive.

WhatSize (free to try, but $12.99 to interrogate folders larger than 20GB, from www.id‑design.com/software/whatsize/index.php) gives a less immediate but more structured 'browser' view of your files and folders, and is highly recommended for more detailed investigation of the contents of your drive. You can also display this information graphically if required: for example, as a pie chart.

As mentioned in August's SOS, another approach is to use MonoLingual (free from http://monolingual.sourceforge.net) to remove unnecessary language resources from your Mac. These can add up to a significant number of bytes: in fact, running this application saved me another 6GB! However, there have been reports that MonoLingual can cause the AutoUpdate application in Microsoft Office to stop working. If this happens with your setup, simply reinstall Office to regain full functionality.