The biggest addition to Logic 9 is undoubtedly Apple's answer to Pro Tools' Elastic Audio, Flex Time, which gives Logic users the ability to non‑destructively alter the timing of audio in ways previously not possible. To help you get to grips with Flex Time, let's take a look at using it to edit vocals.

To give you something to work the examples with, record the following vocal line: "I would like a large cup of tea”. Now, with Logic open, invoke Flex Time by going View / Flex View or using the dedicated Flex button in the toolbar. As you're probably going to be using this command a lot, I suggest assigning a key command to it now (I use Option‑F).

The track header now contains a Flex Mode menu, where you can choose the type of Flex algorithm used for the time compression and expansion of events in an audio region 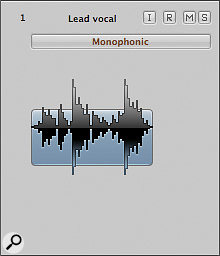 When Flex Mode is on, the track header displays the Flex Mode menu. Here it's set to Monophonic.. As we have a vocal recording, choose Monophonic.

The first time you choose a Flex Mode, Logic scans the audio files on the selected track and inserts Transient markers, which look like pale‑grey vertical lines. These markers are used as navigation points in an audio region and provide locations to quantise to. But Flex mode also makes use of another type of marker, called a Flex marker. These markers are created by you in the Arrange page, and they allow you to manually alter the timing of individual audio events by stretching and compressing the surrounding audio.

The best way to become proficient at editing in Flex View is to grasp the different ways of creating Flex markers. We'll look at three ways and use each method to edit part of our recorded vocal line.

Bend It, Shape It

First, let's slow down the delivery of "I would”. When you're working in Flex View, the Pointer tool becomes position sensitive, working differently depending on whether it's over the top or bottom half of a region. For this example, keep the Pointer in the top half of the region.

Second, let's lengthen the word "a”, this time leaving unchanged the timing of words either side of it. For this example, keep the Pointer in the bottom half of the region when adding markers (the tool displays three vertical lines when the Pointer is in this part of the region).

Now let's look at how to alter the position of multiple events at once, without affecting their duration. To demonstrate this, let's move "cup of” so that it occurs later in time.

These three operations make it quick and easy to manually edit the timing of a vocal performance. If you find you need to remove Flex Markers, double‑click them or use the eraser tool. To edit the location of a Flex Marker, hold down the Option key, and click and drag it to the desired position. To remove all Flex Markers, Control‑click the region and choose 'Delete All Flex Markers' from the pop‑up menu.

Let's now look at a real‑life recording situation involving vocals. When recording a vocalist, it's common practice to double‑track backing‑vocal parts, and sometimes even lead parts. Singers who can track the same part repeatedly with exactly the same timing are rare, and in Logic 8 it was quite a tedious process to correct timing discrepancies between parts. However, Flex Time enables you to quickly align multitracked vocals so that they are tightly sync'ed, removing annoying 'flamming' of consonants between lines and creating a more professional result.

For this example, I've used a vocal whose double-tracked version has timing problems. The two recordings are shown above. As you can see in the second (the double track), most words are late in comparison to the original. 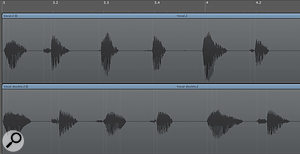 An alternative way to align one vocal to another is to first edit Flex Time's detected Transient markers so that they accurately frame word events, and then create a quantise template from those Transient markers to apply to other vocal tracks. When editing longer recordings in this way, I chop them into smaller sections first, to make editing more manageable.

We first need to turn on Flex Time, then open the sample editor by double‑clicking the top part of your lead‑vocal region. In the Sample editor, click the Transient Editing Mode button, to the right of the View menu, to access editing mode.

Look carefully at the Transient markers that Logic has detected, because you want to get rid of all markers apart from those that are located at the start of each word or syllable. To do this, use the '+' and '–' buttons next to the Transient Editing Mode button to alter the detection sensitivity. I find that I usually need to reduce the sensitivity quite a bit for vocals. A less sensitive detection threshold results in fewer Transient markers, which suits our case, as we only need a marker at the start of each word or syllable.

Once you've got the number of markers approximately right for the vocal recording, you can then select 'problem' words, where the markers haven't been inserted as you would wish, with the Pointer. The '+' and '‑' buttons will now only work on that section. To manually edit automatically detected markers, you can move them by Option‑clicking and dragging, add new ones using the pencil tool, and remove them by double‑clicking on them or using the eraser tool. The screens below show the audio file after automatic Transient detection and then following manual editing of markers so that they occur only at the start of words or syllables.

The Transient markers added by Logic to the vocal recording following automatic detection.

The same recording with Transient markers thinned out. I've tweaked the sensitivity of automatic transient detection so that markers frame only single words and syllables.Now repeat the whole process on your vocal double‑track file.

With the Transient markers of both recordings edited, you're ready to quantise the double‑track to the original. Select the lead vocal region (name the file 'lead vocal', if it isn't already) and go to the Quantize menu in the Region Inspector. Click on it and choose 'Make Groove Template'. Logic will create a Groove template named after the region it was taken from. Make sure that your vocal double‑tracked region has the same start point as your lead vocal. Select the vocal double‑track region and, from the Quantize menu, select 'Lead vocal'. Logic will now apply the quantise template made from the lead vocal to the doubled vocal. Minor discrepancies can then be edited using Flex markers.

Flex Time is an incredible addition to Logic, and after only a few weeks of use it feels like something I couldn't do without! Tune in next month, when we'll look at more ways of using it.

Detailed parameters relating to Flex Time can be found in the Track parameter and Region parameter boxes in the Inspector. Information about the different Flex Modes can be found on page 529 of the Logic User Manual.