As Apple and Spotify mark out the boundaries of the 'sharing' culture, copyright owners are still looking for ways to make their music pay in a digital age. 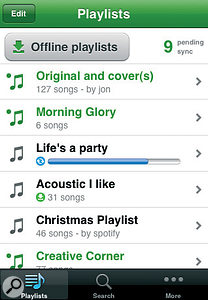 The Spotify iPhone app is now the App Store's number one 'free' offering.

Pete Waterman's recent complaint that he only received £11 for 100 million plays on YouTube for that Rick Astley song he co‑wrote may seem churlish from such a successful producer, especially considering the free advertising the song received as a result, but he does have a point. Listening to music appears to have become an uncontrollable bit‑fest and Apple are showing signs of joining in. Younger readers (who won't remember record shops or paying for CDs) will be so immersed in the culture of free access to music that the point of my diatribe might be lost on them, but it is this: can anyone now make money from music without playing it live?

Apple, for whom the word sharing is so important (many Apple applications have a Share menu, for example) may realise that there could be little to gain from the 'sharing culture' where music is concerned. While Facebook and Flickr buttons have appeared in iPhoto 09, the implementation of Facebook and Twitter in the new iTunes 9 is simply a means of promoting the music and providing a link back to the iTunes Music Store. Canny musicians are already exploiting the opportunities for self‑promotion, judging by the activity on the iTunes Twitter feed. And why would a company like Apple tie themselves to a network they couldn't control? Much better for them to develop their own client and tie it into their hardware (now there's a good use for an Apple tablet) — and it's the user experience this confers that has created the brand we know.

Those who thought they might be able to share their iTunes libraries via their favourite social network have been disappointed by this release, but, as a copyright owner, I'm glad that Apple's take on 'sharing' consists of the ability to move music between up to five authorised computers. Previous versions allowed a library to be shared, but now tracks can be imported from one machine to another, which will be a boon to those managing a music collection across multiple computers.

Announced at the same event (entitled 'It's only rock and roll, but we like it', perhaps as a snub to the Beatles, who were still not on iTunes at the time of writing, despite the release of remastered collections and the Beatles Rock Band game, both on the same day as the Apple event), the new iPods are another example of Apple's mastery of the subtle art of creating desire. They offer enough features to make you want to sell your old one, but not quite enough so that you'll never need to buy another. The iPod Touch, now with up to 64GB storage and a cheaper price (for the base model), still has no camera, so the iPhone remains an object of desire, despite the ball‑and‑chain contract. Steve Jobs maintains that the iTouch, as our American cousins call it, is a 'game machine', so the spot for a tablet as a dedicated handheld computing device is still open. The new iPod Nano has a video camera, a mic, speaker and larger screen, but no wireless connectivity. It also has an FM radio, which you can pause mid-stream, but not record. 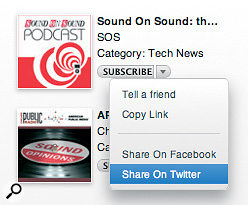 In iTunes 9 you can tell people about your favourite podcast or album.

Another approach to the concept of 'free' music is that taken by Spotify. As predicted in Apple Notes (July 2009), the iPhone app is now available, and yes, it's free. The catch is that you need to be a subscriber to Spotify's premium service. Unlike a radio‑station app such as Pandora, the Spotify app lets you browse and play music on‑line, as well as access the playlists created on your desktop version, which you can also organise from your iPhone. Crucially, you can also sync up to 3333 tracks to your iPhone, so you can play them back off‑line.

Recording from the radio has long been a way of sharing music, but it is a minefield of copyright infringement. While third‑party applications designed to allow you to record from the desktop version of Spotify do exist, the company are rightly attempting to close these down, as no income could possibly be generated for the rights holders or the company where tracks are 'captured' from the free version. The insistence on subscription for the mobile version of Spotify (which does allow you to store tracks) seems a sensible way of 'monetising' the access to digital music. At the time of writing, Spotify is number one on the App Store download chart for free apps, but the Spotify service is not yet available in the USA. Rhapsody, a similar service hosted by Real Networks, is available in the US, but their iPhone app has yet to be cleared by Apple.

As creators and producers of music, and users of technology at the sharp end, we should pay careful attention to how our work is propagated, to ensure that the music industry remains a viable place to earn a living. Pete Waterman's complaint is easily dismissed, but if somebody doesn't keep the income streams tied down, your next royalty cheque won't pay for that new iPod Touch, let alone a new Mac for the studio.