Part 1: Use Logic's EQ and SubBass plug‑ins to give some mastering polish to your mixes.

As a Logic Pro user, and a keen reader of this column, you should know by now that recording and mixing can be carried out completely 'inside the box', but what about mastering? The mastering process has always had a magic aura from the days of magnetic tape and vinyl, when transferring your recordings to a single spiral scratch in a lump of plastic was (and still is) a highly regarded skill. The technology we have now means that we can replicate a lot of the tasks mastering engineers carry out using tools that are available in Logic Pro, but first we need to divide the process into its two main stages:

1. Preparing and polishing the mixed audio for the listening public.

2. Transferring it to the media of choice.

This month, we'll be talking about the first of these, turning to the second in part two.

As long as you can trust your own listening environment, the majority of the tools you can apply in Logic will be equivalent to those applied in professional mastering houses. Of course, the level of experience you can bring to bear might be rather different, but you have to start somewhere!

Since mastering involves polishing and final preparation, and is therefore a relatively subtle process compared with the large‑scale changes that can be made during recording, editing and mixing, it's important to consider the aims of the process, to maintain a clear focus. Ask yourself some questions. Your mix sounds great (of course), but:

Yes, much of this should have been sorted in the mix, but mastering is your last chance to fix such issues before release. Mastering can also enhance the track, giving it that gloss and final sparkle that might be slightly lacking in the finished mix.

Applying EQ at the mastering stage is a final chance to get the frequency balance of the track right. Logic's Channel EQ is a well‑endowed plug‑in, but it has a close relative called Linear Phase EQ that is more appropriate for mastering. This has exactly the same parameters and functionality as Channel EQ, but uses a completely different algorithm, designed to preserve the phase relationships of different frequencies as their gain is altered by the filters. This should result in a much more transparent sound. The processing that takes place can result in delay being applied to the channel on which the Linear Phase EQ is inserted, so while it's not ideal in a multitrack mix scenario, it's a good choice for manually tweaking the EQ of a single stereo file in a mastering situation. 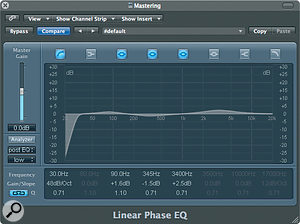 An example of a 'mastering EQ' curve applied using Linear Phase EQ.The screenshot above shows a typical mastering curve designed to add slight emphasis to the deep bass and 'air' to the top end, while slightly reducing low‑mid 'mud'. The filter at the bottom end is optional, but since this is DIY mastering, ask yourself this question: what can you hear? Leaving aside the question of whether you should use headphones for mastering at all, although my headphones have a stated frequency response of 18Hz to 24kHz, if I test them with the Test Oscillator in Logic, below about 30Hz things become a bit vague. It's worse on monitor speakers, as the response tails off around 40Hz. Do I really want vague, unpitched nonsense wobbling around in this range of my mix or below (where only my bowel can detect it)? Purists may argue about psychoacoustic benefits, but the potential for low‑end confusion, and playback‑system damage might not be worth the risk.

What about that perspective you lost when mixing? (As Tony Visconti said in a 2002 interview, "I know what I do after 10 hours I'm probably going to have to re‑do in the morning... it usually sounds awful.”) Compare your finished mix with a favourite commercial equivalent and you might be surprised. Trying to match the full, fat bass and sparkly tops of Kelly Clarkson's latest (and yes — Kelly, at the absolute peak of modern audio production, does a good line in sparkly tops) by hand, using Linear Phase EQ, is one approach, but Match EQ allows you to do this automatically, as follows:

Smoothing determines the resolution (in semitones) of the filter curve. A value of one allows discrete frequencies every semitone, a value of 12 allows discrete frequencies every 12 semitones, and so on. The channel link button reflects the fact that the two channels of a stereo file have been analysed as distinct signals; the default setting of 100 percent blends the filter curves produced as a result of analysis into a single curve applied to both channels, while a setting of zero percent applies a separate filter curve to each channel, but it is unlikely that you would want to apply a separate EQ curve to each channel of the mixed file you are mastering, as consistency is a key consideration. An example of an instance where separate curves might be appropriate would be when mastering material specifically replicating unorthodox use of stereo image on historical recordings: check out 'I Feel Free' by Cream, which has the bass entirely in the right channel, with lead vocals and guitar on the left

Although 'drag and drop' is much faster, you can make Match EQ learn the files in question by playing them in real time. The main advantage of this method is that you can make the plug‑in learn the EQ curves of particular sections of material, as opposed to whole tracks.

When you line up your track against its commercial equivalent, one of the first things that will hit you (or rather, won't hit you) will be the lack of bottom end. Not that you didn't work hard on this in the mix, but it will still probably seem less powerful than it could be. In the April Logic workshop (/sos/apr09/articles/logicworkshop_0409.htm), Gary Bromham detailed a neat trick for synthesizing sub‑bass tones on a kick drum, and with a bit of imagination this can also be extended to pitched bass parts. If, however, you are mastering a finished mix, you will no longer have access to individual tracks in isolation, and are therefore limited to using the SubBass plug‑in. This works by synthesizing bass frequencies at a specified ratio below existing frequencies. For example, a ratio of two will halve the sampled frequencies, creating sine tones at one octave below. However, if, as in this case, it is applied to the whole song and not just the bass part, take care how you use it, as you can create all kinds of weirdness! For a start, it has two bands (High and Low), so unless you move the Freq Mix slider fully to one extreme or the other, you will be generating two lots of sub‑bass tones.

To hear exactly what the plug‑in is creating, set the Dry output slider to zero percent and move the Wet slider up. Then, for clarity, move the Freq Mix slider to 100 and only use the controls for the High section, so that only one band is operational (see screenshot above) 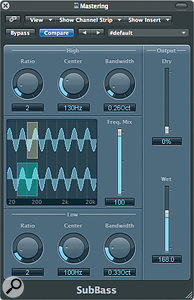 The SubBass plug‑in, with parameters that allow you to listen to the effect of one synthesized sub‑tone.. Carefully tune the Center frequency and bandwidth so that the output is a sensible version of your bass part. If it is difficult to do this because the input signal contains overly complex bass activity, you will quickly hear that the resulting mess is something that should not be mixed into your song! Equally, if the plug‑in's output contains frequencies so low that you can't hear them accurately, do not use them — unless you have a lot of experience in translating what the movement of your speaker cones sounds like for owners of systems with a lower frequency response. Once you're happy that the plug‑in is creating something sensible and useful that complements the track, move the Dry output slider back to 100 percent and adjust the Wet slider to taste.

As with limiting, it's very easy to go overboard with this plug‑in at first. Just be sensible: if you can't hear it or make an accurate judgement as to its effect, don't use it.

Right: put your half‑mastered track on the back burner and stay tuned. In the second part of this article, next month, we'll be looking in detail at the role dynamics processors play in mastering. We'll also rush headlong into the loudness debate!