Future Of The Music Industry? 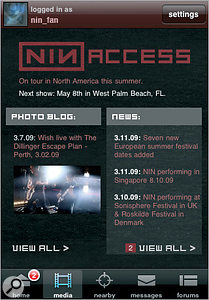 NIN: Access is an iPhone app that lets you interact with the band's web site and stream audio.

A professional composer I work with has a late 2007 iMac (just out of warranty, naturally), which recently began to freeze unpredictably — not the usual spinning beach‑ball of death, but a full‑on kernel panic. You can recognise this by the fact that you're told in four languages to hold the power button down in order to restart the computer — which is enough to make anyone panic. It needed sorting fast, so he took it along to his nearest Apple Store. After several diagnoses of this admittedly intermittent fault, each of which required a return trip when it was discovered that the issue remained, they finally claimed that it required a new logic board, which is an extremely expensive job.

He gave me a call and we ran through the symptoms over the phone. Not being a qualified computer technician, I applied a process of deduction familiar to anyone who has traced down the cause of a dodgy signal in a recording studio. If the logic board was faulty, it's likely the computer would simply not start up at all. The fact that it did suggested also that it was not a hard drive failure, as these are usually 'catastrophic' and not 'intermittent.'

My first thought was badly seated or faulty RAM modules, and as it turned out, that was the only component that the Apple Store had not checked. With nothing to lose at this point, my colleague bought a new pair of RAM modules (less than £20), and after fitting them in place of the existing RAM, which he did himself, it seems that the fault has disappeared.

Apple Stores, which are wonderful emporiums of light, magic and last‑minute gifts at Christmas, aren't the only place you can get help for your Mac, and may not always be the best. There are plenty of independent stores out there that will offer high levels of service, and for peace of mind you can check that they are Apple Authorised Service Providers. This status means that they have access to genuine Apple spare parts and employ Apple Certified Macintosh Technicians to carry out the work.

Future Of The Music Industry? 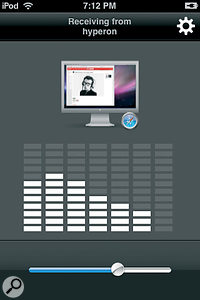 AirFoil Speakers Touch, an iPhone app that streams music content from your Mac to your iPhone or iPod Touch side panel.

Apple have enjoyed their best-ever March‑quarter sales figures, but it's interesting to note that their computer hardware sales fell by three percent year‑on‑year to that point. Overall sales figures are being boosted by increasing iPhone and iPod sales, with the latter being especially surprising given the maturity of this iconic music player in the marketplace. The iPod Touch accounted for nearly 30 percent of units sold, perhaps bearing out Apple's faith in the device as a gaming platform. The importance of the Touch and the iPhone cannot, however, be underestimated in the future of what was once called 'The Music Industry.'

Ever since bit‑torrent software made music available to steal, those of feeble mind have believed that this made it right to do so (I mean — would you steal a car radio if the window was open?) and colleagues and friends have enjoyed attacking my idealistic position as a composer and rights‑owner. I would counter this with blue‑sky notions of mobile devices to which you would stream music on demand based on subscription. Since then, of course, Spotify has come along to make this a reality for Internet‑connected computers. They're 'monetising' their web‑based service with a small amount of advertising, which you can remove by subscribing and, as we all know, subscription is the model that has fuelled the mobile phone industry.

Despite the iPhone apps that let you access web‑based radio stations (Wunder Radio and Pandora, for example), and Spotify (not released at the time of writing as an iPhone app), where the user chooses the tunes, makes the playlists and controls the content, it was the following recent submission to the App Store that caught my eye. Trent Reznor, of Nine Inch Nails, has always been involved at the leading edge of record industry developments, and he was one of the first to make stems of his songs available for mixing in GarageBand, long before Radiohead. Although initially rejected for "offensive obscene content” his iPhone app (called NIN: Access) is now available and is essentially a portal to the Nine Inch Nails website, including access to playlists of streaming music and other content from the band's social network. You can take a look at what's going on, including a map of the globe showing who is listening, at http://access.nin.com. What is significant about this is that there is no record company involved, nor is iTunes an intermediary (for the music, that is). Apple will make their percentage on the hardware, but they may need to remodel iTunes in the face of such developments, as even Sony embrace an open digital rights 'management' system for the proposed PlayStation Network, and offer Last FM via WiFi on the X‑series Walkman.

Mac musicians will benefit in the longer term, as Apple are still, by and large, a computer company, developing professional platforms off the back of consumer sales. And as one executive was heard to say recently, "Apple recognise that there is a global economic recession, but we have decided not to take part.”

• MacProVideo, at www.macprovideo.com, is an excellent resource of tutorial videos on a whole range of Mac‑based software. It's written by the guys who produce the Apple Training Series tutorial books, and has plenty of free content to get you going before you need to pay for the full service.

• AudioTuts+, at http://audio.tutsplus.com, also has a wide range of music technology‑related tutorials, some as videos, some in more traditional format, and also includes applications that run under Windows, such as Cubase. Better still, the content is all free to the end user, and you can even get paid to create your own!

• If it's hands‑on training you want and weren't able to access the Alchemea College workshops at the LIMS show, you may like to know that the New Technology Institute are offering 20 percent off all Logic Pro courses for Sound On Sound readers. There are NTIs in Belfast, Birmingham, Chester, Dublin, Kingston and Leeds.

• If you haven't got Dropbox yet, go to www.getdropbox.com. It is an elegant solution for online storage, and works very well for collaborative projects.

By the time you read this, the Worldwide Developers' Conference will have taken place in San Francisco, and Philip Schiller will have announced dates for significant software and hardware releases. Let's hope Snow Leopard is with us in time for Christmas (how fitting!) and we can finally make full use of the processing power available in an eight‑core Mac Pro. A cheaper notebook is unlikely, as the Mac Mini already exists at that price point, but perhaps we'll see an Apple Remote Desktop‑style iPhone application that will allow us to use the Mac Mini as a 'headless' media server, streaming our iTunes collections back through the phone using something like Airfoil Speakers Touch, the 'app' version of Rogue Amoeba's solution for sending audio to network devices.

All the pieces are in place, but it's lots of pieces in lots of different places. It just needs a company with a track record in combining emerging technologies into integrated products that are both accessible and desirable...