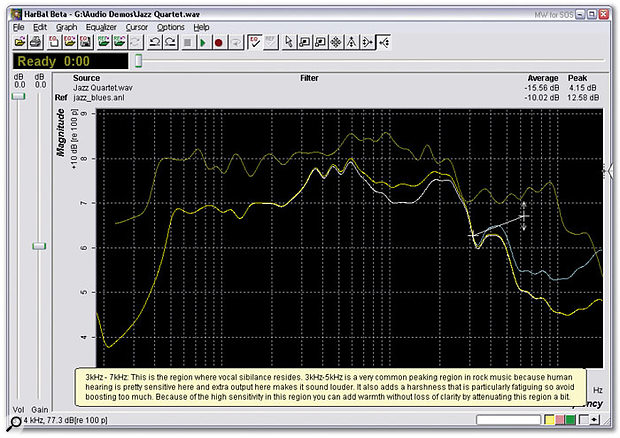 The Harbal EQ-matching program benefits from some worthwhile tweaks. We report them, and discuss some new information about Longhorn: the next incarnation of the Windows OS.

Back in SOS March 2004 I reviewed version 1.02 of the Harbal Visual Mastering System for Windows users. Harbal (which stands for 'Harmonic balancing') is a stand-alone utility that runs under Windows 95, 98, ME, NT, 2000, or XP, and is designed to match the frequency response of a target track to that of a reference. I was impressed by its combination of resizeable main graphic display for detailed examination and editing of the existing frequency response of any audio track, automatic loudness compensation to make EQ choices easier, and a well-chosen set of analysis files for comparison with high-quality commercial tracks.

Four months on and Har-Bal International have just released Harbal 1.5, with a set of new features and improvements. One of the most noticeable is the twin vertical sliders down the left-hand side of the main display. These control playback Volume (a new feature) and overall filter Gain (for raising the final level of a track or making it match others in the context of an album). The latter was previously only available as a text box on the toolbar.

However, far more useful is the set of three new buttons on the status bar that let you toggle the display of the peak, average and geometric-mean power plots of frequency response for both target and reference tracks. With all six curves displayed, Harbal can become cluttered and therefore confusing, so these options make a huge difference to screen legibility. You can still edit the frequency response on any of the three curves. Sometimes it's easier to work with the peak plots, which (for example) may show momentary harshness at a particular frequency more obviously (perhaps because this instrument is only heard for a short time in the track, and therefore won't show up in the average plot). Whichever curve you choose to edit, it controls a single overall filter response.

Just as useful is a further button to toggle the three curves displaying the original non-EQ'd response, to show what's changed, and while this is visible a fifth button adds dots to the curve currently being played back, so you're sure which one you're listening to when performing A/B tests.

Above the main display there's now a read-out of track statistics: source file-name, reference file-name, filter file-name (you can save your EQ responses as filters, to use again as a basis for other tracks), plus overall Average and Peak levels for both source and reference tracks. These statistics really should have been in the initial release, as they make things a lot clearer.

Harbal users can still start monitoring playback at any point during the track, by moving the horizontal fader above the main display, but there's now a new toolbar Loop button that, when pressed during playback, jumps back to your chosen start point and continues looping to the new loop point indefinitely, until you toggle it off or stop playback. I found this very useful for auditioning a specific section of a track, although it would be even easier if the slider were replaced by a slim graphic bar showing the track's waveform, in which you could define a start and end point, as you can in most audio-editing applications.

The filter controls themselves have also been improved, with two further new toolbar buttons alongside the original parametric one, to let you switch the cursor to low or high shelf options. These make tilting a portion of the response in either direction much easier than before — perfect for taming excessive bass or treble, or for adding air or warmth to a track. Beware, though, of adding loads of bass to match that of a target track if yours has no significant level in that region. This is a weak point of automatic 'EQ rippers' and often results in distortion.

Also new is a handy set of 'tips' that pop up as you move the cursor across the spectrum, offering details about the various frequency bands, problem areas, and what to listen out for (see screen below). In addition to the default General tips, a further selection can be loaded encompassing a range of brass, percussion, strings, voices, and woodwind instruments, and you can also create your own tip files to remind you of particular problem areas in your mixes. Overall, these tips are useful, particularly for the novice, and my only reservation is that the longer ones often obscure the graph's frequency markings.

Less immediately useful, but handy for analysis, are two new main display views. 'Frequency Response' shows the current EQ curve rather than your track's response, and can be edited using the various cursor tools, while the Impulse Response provides a fixed display that's only really useful in showing the difference between the original Linear Phase and new Minimum Phase filter options — the audible difference between these two is extremely subtle by the way, but some people find the 'pre-ringing' of linear phase filters objectionable when they're using high Q settings. Now they have another option.

Harbal now supports ASIO and DirectX driver formats as well as MME, and you can now choose a soundcard output within the utility, rather than using the default Windows one. Compared with version 1.02, the time the software takes to switch between the untreated audio and the EQ'd version has also been halved, which makes the utility feel more responsive. An 8192-point EQ algorithm will always involve considerable latency, but 93ms at 44.1kHz is still far from instant, making subtle A/B comparisons somewhat frustrating, since you can't always hear exactly when the changeover occurs. Although this latency could be reduced at the expense of higher CPU overhead, a visual indication of the exact changeover point would provide welcome feedback, and the developers have taken this suggestion of mine on board for possible inclusion into a future version.

Other, smaller, improvements include background recording of the final EQ'd file, so that you can start analysing and editing another track; recent file history lists; support for mono files; a Match Loudness function to instantly bring the overall level of the source track to that of the destination, using the Gain slider control; Batch Analysis so you can grab a load of tracks and have them all converted into reference responses in one go; and the cure of a few small bugs. 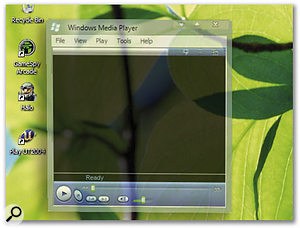 Windows Longhorn will feature windows with variable translucency so that you can still see what's going on underneath.

Overall, although it's still initially harder to get to grips with than some rival 'EQ ripper' utilities, I still prefer Harbal, with its more considered approach to improving the final sound of an audio track, the detail of its manual and tutorials, and its helpful on-line user forum hosted by Har-Bal's professional mastering and research engineers. It's a serious tool that can teach you a lot about why your mixes don't sound like commercial tracks, at the same time as improving them.

It's a shame that the promised plug-in support isn't yet in place, so that, for example, it would be possible to load a multi-band compressor and normaliser and use Harbal 's EQ as part of a mastering plug-in chain, but apparently so many new features were added to this release as a result of user suggestions that this has been delayed. However, that support is still promised in due course, as is a VST plug-in version, and a Mac port will possibly become available by the end of 2004. The version 1.5 upgrade is free to existing users, while the program itself is still a very reasonable $95 for new ones. An 8-bit demo version is also available as a free download from www.har-bal.com.

I've mentioned Microsoft's Longhorn operating system a couple of times already in PC Notes (most recently in August 2003), but the latest indications are that we won't see it until at least mid-2006. However, its much-vaunted transparency and 3D graphic engine (code-named Avalon) — which, for the first time, mean that for the full experience even office software users will require an up-market graphics card — have been confirmed as optional.

Three different graphic interfaces will be offered, for a tiered 'user experience'. If you have a high-end graphics card with at least 64Mb RAM you can try the full 'Aero Glass' experience, with variable-transparency windows and 3D shading features. I can see this being popular with PC musicians who, for the first time, will be able to view their sequencer arrange pages scrolling smoothly by while they're working on superimposed and semi-transparent editing screens 'above'. 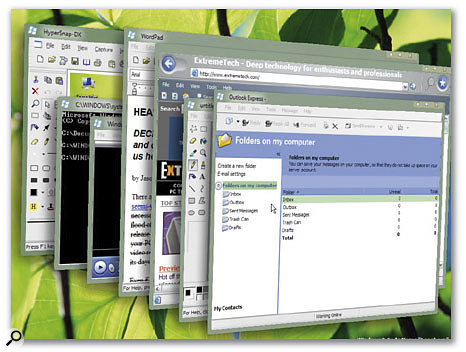 Alt-Tab in Longhorn will offer a tilted 3D view of currently open applications, so you can see their contents.

The mid-level 'Aero' is more suitable for cards with 32Mb of RAM, and both Aero graphic options will also require DirectX 9.0, AGP 4x and a Longhorn graphics driver. However, those whose graphic cards lack these features will still be able to use the 'classic' interface, designed to mimic the corporate look of Windows 2000.

Microsoft are also hoping to incorporate new laptop-friendly features, such as an additional user interface that allows instant access to film and audio playback without booting up Windows itself, to make the laptop as easy to use as a portable DVD player.

Industry experts are already predicting that by the time Longhorn is released the vast majority of PCs will be able to run it, although that does seem to presuppose that they incorporate a graphics card that runs about three times as fast as those available today, a minimum of 2Gb of RAM and a 4-6GHz 64-bit processor. Mind you, most PC processors being sold by the end of 2005 are likely to be 64-bit capable, so Microsoft are encouraging hardware developers to start writing 64-bit drivers for their wares early. With two years to wait, hopefully our Longhorn transition will be comparatively smooth.