While music software interfaces still lag behind hardware in the tweakability stakes, there's a lot we can do to improve that situation with Mac OS's built‑in features.

With Propellerheads new' Record audio recording software officially released on 9th September, I thought it wise to take a quick look. It's a great piece of software, with a superb algorithm for making audio follow tempo. But what about that GUI? Propellerheads are already getting great feedback from their beta testers and user base about the general look and feel of the new application — and so they should, as it is modelled on classic SSL design. I do, however, have an issue with software companies who insist on recreating hardware interfaces. Propellerheads are by no means alone, all DAWs (and a lot of plug‑ins) being packed with hard‑to‑use controls and hard‑to‑read text. I know why they do it: because the model is tried and tested, and authenticity lends a sense of the quality associated with premium hardware brands to the otherwise 'smoke and mirrors' craft of software development. But surely it's time to give us a little more for our money in terms of usability? How about a form of graphic interactivity that allows each control to magnify as the mouse passes over it? Or perhaps morph into a more computer‑friendly graphic design? In other words: please, no more endless banks of tiny rotary controls with equally illegible legending!

Meanwhile, what can we do immediately to aid our interaction with the complex graphic environments of our favourite music software? 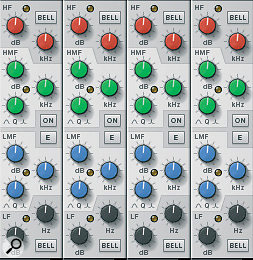 Record's mixer before and after zooming. 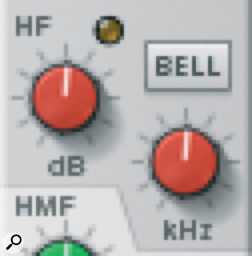 In OS X, Apple provide a very useful zoom control built into the Universal Access features found in System Preferences. I would recommend checking the 'Only when the pointer reaches an edge' option (click the Options button to access this). This way you can still use the pointer to move controls when zoomed in close, without the background shifting around and making you seasick. Knowing the keyboard shortcuts always makes this easier to use:

Keyboard shortcuts are also a boon to productivity in any situation. ProTools users who have passed the 210 certification exams become 'operators' in acknowledgement of their dexterity at the keyboard, and Logic Pro users can 'roll their own' in the Key Commands window. But Mac OS X also provides a way to set up custom keyboard shortcuts, again in System Preferences, in the 'Keyboard and Mouse' section. If your application lacks a keyboard shortcut (that is, one is not shown in the menu), you can use this option to create one at system level. Using this method you can assign the same key commands to equivalent functions in different applications, and even overwrite existing key commands if you want to change them.

One step further along the road to super‑geek status would be QuickSilver (available from www.blacktree.com). This is a flexible tool that can be used for application launching and setting up hotkeys and keyboard shortcuts for any action in any application. QuickSilver does not appear to have been updated since 2006 and was still in beta then, so it comes with the usual warnings, but it can seriously improve productivity, especially if you often carry out the same actions in the same applications.

QuicKeys, by Startly Technologies (www.startly.com), moves the game on a little bit further. It does cost $59.95 after the 30‑day trial expires, but will let you automate any action and assign hotkeys or key commands. And I mean any action — so if you want to open Logic Pro, create three software instrument tracks and instantiate an ES1 on the second track by hitting one key command, you can! Most of this can be done in QuickSilver, but the QuicKeys interface is much easier to use. With QuicKeys you can also use a MIDI keyboard to trigger an action, so if you want to start recording by playing a C7#5 chord, this is the application for you.

Part of the QuicKeys interface, showing a complex action in Logic Pro triggered by a jazz chord.

If pressing keys (and remembering shortcuts) is too much bother, voice activation might be the way forward — but more of this in a future column. Next month, I will (naturally) be passing on my thoughts about the recently arrived Logic 9, mentioned in this month's News pages but announced too late for detailed inclusion here. Stay tuned!

Since we are on the subject of cool applications that aid productivity, DropBox (www.getdropbox.com) deserves a mention as a great way to keep backups of files on a remote server and for collaboration with other DropBox users. This is another example of an application with some limitations that can be removed by paying a subscription for the premium service, but is more than adequate for most users in its basic (free) form. It certainly scores over Yousendit.com and equivalents for sharing large projects, as there is no 100MB file size limit. DropBox is also available for users of computers not made by Apple...