Since the new MacBook Pro promises to be such a capable little beast, we thought we'd pit it against its older, desktop‑dwelling brother, the iMac. 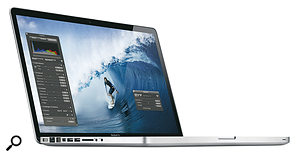 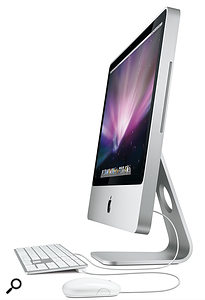 ollowing on from last month's attempt to talk about something other than the iPad 2, this month I have been using one of the new MacBook Pros as the temporary heart of my studio, to see how well it would perform in that role. The model on test was the 17‑inch version, with a 2.2GHz quad‑core Intel i7 Sandy Bridge processor, 4GB 1.333GHz DDR3 RAM and 750GB hard drive. While still technically a notebook, the 17‑inch version is certainly not light — at 2.99kg — and is in a completely different category of portability to, let's say, the iPad 2.

Native Instruments Komplete has recently become a fundamental part of my sonic arsenal, making an ideal complement to both Logic Pro and ProTools. Some of its instruments involve some pretty heavy lifting as far as resources are concerned, so I decided to carry out some comparative testing against a recent iMac equipped with a 2.4GHz Intel Core 2 Duo processor and 4GB 667MHz DDR2 RAM.

The two instruments I used from the Komplete bundle were Kontakt, first with the Factory Strings loaded, then with Tonehammer's Montclarion piano (specifically, the Montclarion_Piano_Full preset, one of the larger 'multis', which uses three voices per note); and Reaktor, loaded with the Silver Bowl preset from Reaktor Prism. Since Kontakt runs in both 32‑ and 64‑bit mode, where Reaktor will only run in 32‑bit mode, I tested each combination with Logic Pro running in 32‑ and 64‑bit mode. Reaktor, therefore, invoked the 32‑bit audio bridge when it was opened in 64‑bit Logic.

I also tested each instrument with two I/O buffer‑size settings — 64 and 512 samples — to reflect two possible practical situations: performance/recording, and playback/mixing. In each case, an appropriate Logic Pro project was created, as follows:

The Results Are In!

For ease of comparison, I've tabulated the results, recorded as number of instances. In each case, identical tests were run on the MacBook Pro and the iMac.

This table shows the number of instances of each instrument that were used before performance problems occurred. (MBP: MacBook Pro.)

Various error messages and odd behaviours were noted at the limits of performance in both cases. With a 64‑sample buffer, playback began to suffer from audio glitching long before Logic Pro stopped playing. For example, 31 tracks of Kontakt Factory Strings played back, but glitching was noticeable as soon as the sixteenth track was added (Logic Pro running in 32‑bit mode). This was not a problem with a 512‑sample buffer, but in 32‑bit mode, memory warnings were the first sign of trouble.

In some cases, Logic Pro would just quit unexpectedly, presumably as a result of not enough RAM being available. In 64‑bit mode, Logic Pro was better behaved, and although not able to take advantage of larger amounts of RAM, since it was not physically available, the warning messages were usually of the standard 'System Overload' type. MIDI and audio synchronisation errors, along with non‑standard recognised sample rates, were also seen, but with no discernible pattern.

The figure recorded in each case was, therefore, the highest possible without any form of audio glitching or other error.

The results, then, are fairly conclusive. Recent developments in processor design, coupled with memory that is running twice as fast, mean that this new MacBook Pro — which is actually still a portable computer — is more than twice as capable in these tests as the iMac. That's actually a little disappointing if you believe Moore's law (which, back in 1965, predicted that computer processing would continue to double every two years), as the test iMac was purchased back in 2008.

I know of many people who run an iMac as the hub of their setup, possibly in the belief that since it's not portable it must be more like a desktop, and to an extent that has been true for quite a while. With this latest revision, the MacBook Pro really lays down the gauntlet in terms of performance, but if you can sacrifice the portability, wait for these processors to hit the iMac range for better‑value high performance. According to the excellent source http://buyersguide.macrumors.com, the iMac is almost 40 days overdue for an update at the time of writing, so you may not have to wait too long!