Apple unveiled new versions of iLife and iWork this month during their final MacWorld keynote, along with a new 17-inch MacBook Pro. And, despite the fact that they didn't appear at this year's NAMM show for the second year running, support for Apple's products has probably never been stronger.

If you follow Apple and their "insanely great” products, IDG's San Francisco MacWorld show has been an annual source of anticipation during the first week of a new year. Since 1997, Apple have kicked off various MacWorld shows with a keynote speech, usually presented by the company's CEO, Steve Jobs, and unveiled some of the company's most highly regarded products. The titanium-based Powerbook G4, the 12‑inch and 17-inch Powerbooks, the Macbook Pro and Macbook Air, the first iMac with an Intel processor, GarageBand, and, of course, the iPhone, were all announced at MacWorld San Francisco, to say nothing of the MacWorlds that used to take place in other US cities, such as Boston. But, as the English proverb goes, all good things must come to an end. Or, at the very least, all good things need to be re-purposed in a way that makes sense for the company presenting them.

Apple announced before Christmas that the coming 2009 MacWorld show would be the last attended by the company, and thus the last MacWorld that would feature a keynote to showcase Apple's latest and greatest. Perhaps even more surprising was the news that the final keynote would be presented not by Apple CEO Steve Jobs, but by Phil Schiller, Apple's senior vice president of Worldwide Product Marketing, who had appeared with Jobs in countless keynotes over the years. However, after the keynote Jobs released an email stating that he would be taking a medical leave of absence from Apple, and we can only wish him the best in his recovery.

Although January 2010 may feel hollow and empty without an Apple keynote, the move isn't entirely unexpected. Apple have been reducing the number of trade shows in which they participate over the last few years: last year's NAMM show, for example, was the first time since the acquisition of Emagic that the company chose not to exhibit. But with the growing number of Apple retail stores across the globe, it's now easier than ever to check out the latest products without having to make plans to attend a trade show. 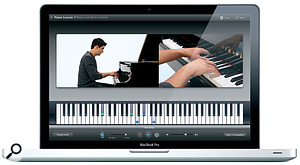 Since it was the last MacWorld keynote, it was perhaps fitting that the first new product announced was iLife 09, a new version of Apple's software suite for managing your digital life that features the popular iPhoto, iMovie, iWeb, iDVD and GarageBand applications. Although iPhoto and iMovie were originally announced as stand-alone products, they became part of the iLife bundle when it was introduced during the 2003 MacWorld keynote. A new iLife bundle was introduced every January for the next three years, and this cycle was only broken with the introduction of iLife 08, which appeared later than usual in the summer of 2007.

Of most interest to musicians, iLife 09 features GarageBand 09, and rather than focusing solely on music-creation features, as in previous releases, this new version introduces a completely new category of functionality. After giving anyone the tools to make music with GarageBand, Apple have clearly now realised they should be the responsible parent and provide some musical training as well, since the new version of GarageBand includes music lessons that are integrated directly into the application.

Two types of lessons are available, Basic and Artist, of which 18 Basic Lessons are provided to help you learn either the guitar or piano. There are a number of nice touches in the way lessons are presented in GarageBand, such as the way you can view the guitar fretboard or piano keyboard alongside the instruction video, to see exactly what the teacher is doing. You can also see the relevant notation, and this can be configured in a number of different ways for seeing chord names, tablature, and so on.

Artist Lessons can be purchased separately from the Lesson Store in GarageBand 09, and each features a well-known artist showing you how to perform their well-known song. So if you've ever wanted to have Sting show you how to play 'Roxanne' on the guitar, or Sarah McLachlan teach you 'Angel' on the piano — and who hasn't? — this is now possible in the comfort of your own home.

While the new GarageBand Lesson content might be a little neophytic for most Sound On Sound readers — although, to be fair, it's not really aimed at this market — I do think it's a really interesting move from a music software perspective. Sure, music education software is nothing new, and there are many web sites offering similar services; but having education features actually built into a music-creation application could start an interesting trend, especially if Apple expand the Lesson content and cater for more advanced techniques.

GarageBand 09 also features a new selection of guitar effects, including amp models and virtual stomp-boxes, complete with onscreen representations. And there's also an improved version of Magic GarageBand, enabling you to create custom mixes and also record your part directly into the Magic GarageBand interface. The new version of GarageBand should be available as part of iLife 09 by the time you read this column, and we'll take a closer look at the new features in a future Apple Notes.

Following the introduction of the new Macbook and 15-inch Macbook Pro models last year, which feature Apple's unibody enclosure machined from a single piece of aluminium, Schiller also announced the new 17-inch unibody Macbook Pro at MacWorld, as had been widely expected. This new Macbook Pro follows on from the features and aesthetics Apple introduced in the smaller models, such as the multi-touch glass trackpad (where the trackpad is the button) and the new Nvidia graphics hardware, with the 9600M GT providing dedicated graphics performance and the integrated 9400M offering the best balance between performance and battery life.

In fact, the battery life is perhaps the most significant new feature of the 17-inch Macbook Pro. Using the 9600M GT, Apple claim up to seven hours of battery life; but, if you use the 9400M graphics hardware instead, it's apparently possible to get up to eight hours, which would be rather impressive. This is because the battery used in the 17-inch is the first to feature Apple's new, custom-designed lithium-polymer cells; and, in addition to a single charge lasting longer, Apple claim the battery can be charged many more times than before: up to 1000 times. Thanks to an Apple-developed technology called Adaptive Charging, the computer can intelligently charge the cells to ensure a longer life, which, according to Apple, should result in a battery life-span of up to five years.

This longer life-span is probably a good thing because, in order to cram as many cells into the 17-inch Macbook Pro as possible, Apple have removed the ability to, well, remove the battery. This might frustrate some users, and it remains to be seen whether the trade-off between a longer battery life and the ability to carry multiple batteries is worthwhile. And perhaps the biggest drawback is that you'll need to take your Macbook Pro to an Apple Store should the battery need to be replaced before the entire computer does.

As with the 15-inch Macbook Pro, the Firewire 400 port has also been removed on the new 17-inch; although, on the plus side, something that it is possible to remove on the 17-inch — which you can't on any other model — is the glossy screen. Thankfully, Apple make it possible to order this Macbook Pro with an anti-glare option for an additional £34.99$50, which is great for those less vain individuals who don't enjoy seeing their own reflection whilst working.

The new Macbook Pro starts at £1949$2799 for the base model with a 2.66GHz Intel Core 2 Duo processor, which now features the high‑resolution 1920x1200 display as standard, and Apple offer plenty of appealing options for those musicians and audio engineers who demand the ultimate in mobile performance, such as a faster processor, the ability to install up to 8GB memory, a 256GB solid-state drive, and more. The 17-inch Macbook Pro should be available by the end of January, and we'll be taking a closer look at this machine, along with Apple's latest notebook technologies, in a future column.

Although not announced at MacWorld, towards the end of January Apple also quietly upgraded the specification of the low‑end white Macbook with an improved Core 2 Duo processor, now running on a 1066MHz buss, the new Nvidia GeForce 9400M integrated graphics, and 2GB memory. This entry-level MacBook retails for £719$999 compared to £929$1299 for the cheapest unibody version. Despite it being the cheapest MacBook model, it does at least have one advantage relevant to musicians over the more expensive models: a Firewire port. This might be preferable to some users who want to trade connectivity for the latest features in a cheaper Mac notebook. 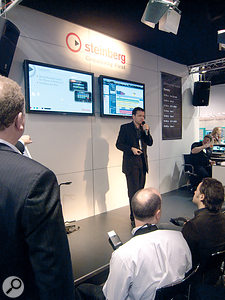 During Steinberg's press conference on the first day of NAMM, senior product planning manager Arnd Kaiser announced Cubase RC, an application for the iPhone that enables Cubase users to remotely control their workstation.

Although Apple were absent once again this year, there was no shortage of interesting Apple‑related developments at the 2009 Winter NAMM show, and one of the highlights was Steinberg's announcement of Cubase RC for the iPhone and iPod Touch. Picking up on the current craze for iPhone apps, the unfortunate phonetics in the Cubase RC name refer to the app's ability to remote-control Cubase from your mobile device. However, rather than just offering transport commands, Cubase RC will also enable you to trigger Arranger Parts, making it possible to 'perform' arrangements of the current Cubase Project on your iPhone in much the same way as the Live pads work in Steinberg's other music‑making application, Sequel. Cubase RC will be available from the App Store in the second quarter of 2009.

For those mobile Mac users who require additional DSP power, Universal Audio announced that they are bringing their UAD2 technology to notebooks with the UAD2 Solo/Laptop ExpressCard, and what's perhaps most impressive about this product is its size. Previously, the mobile UAD solution was the UAD-Xpander, which was basically the original UAD card in a brick that plugged into your Macbook Pro via an ExpressCard adaptor. But now the whole DSP package fits into the ExpressCard itself, and one fairly liberating bonus of the scaling down in size is that you no longer need to carry around a separate AC adaptor for the UAD card. The UAD2 Solo/Laptop will be available for just $499, also during the second quarter of this year.

And, last but not least, it's rare for a plug-in to raise my eyebrows quite so far, but MOTU's Mac-only Audio Unit instrument plug-in Volta did just that. Falling into the category of 'simple but extremely clever', Volta transforms your audio interface into a Control Voltage (CV) generator by synthesizing the appropriate signals to control external modular synths. This makes it possible to incorporate a hardware modular synth into your software environment as if it was a virtual instrument, and various modulation possibilities such as LFOs are available, in addition to being able to trigger notes.

However, a particularly clever idea regarding the handling of notes when triggering oscillators is that, because oscillators often have multiple outputs, an output from an oscillator can be fed back into the plug-in for real-time tuning calibration, which is pretty neat. To find out more about Volta, you can register at MOTU's web site to receive information: www.motu.com/other/feedback/volta-information.