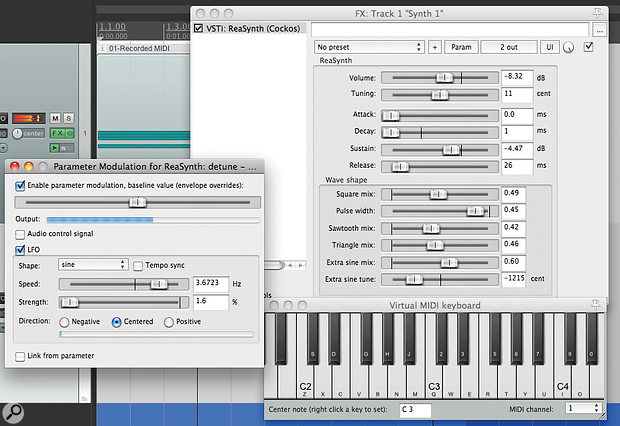 The ReaSynth plug-in being triggered by the Virtual MIDI Keyboard. The 'Detuning' control is being manipulated by an LFO using parameter modulation. Note that the output volume on the plug-in is attenuated once multiple oscillators are mixed together.

In the last column, I took you through the joys of Reaper’s ReaSamplOmatic sampler plug-in, and now I’ll look at another simple instrument that requires a bit of work on the user’s part: ReaSynth. With a limited number of oscillators and an amplitude envelope, this plug-in is very much akin to an analogue additive synthesizer. I’ll look at how ReaSynth can be combined with parameter modulation and other plug-ins to produce timbres that really stand out.

Open ReaSynth via the plug-ins and effects window. It can be triggered by an external MIDI keyboard or the Virtual MIDI Keyboard. The first picture shows the range of oscillators available towards the bottom of the ReaSynth plug-in window. Three main waveforms — square, sawtooth and triangle — can be mixed together, plus an additional sine wave. The ‘Extra sine’ is there to add weight to the sound once the other waveforms have been blended and works best as a sub oscillator, tuned to an octave lower than the others. Try this:

For a more pronounced vibrato, you can add a low-frequency oscillator (LFO) mapped to pitch, using Reaper’s parameter modulation facility. The LFO modulates the pitch of all oscillators simultaneously, allowing for the creation of more strident and expressive solo timbres. Let’s try it:

To make sounds thicker still, multiple instances of the plug-in can be layered in the effects chain and detuned against each other, or you can try introducing a chorus effect.

Unfortunately, ReaSynth doesn’t include a white noise generator so it’s not easily possible to synthesize custom analogue-style drum hits or add a breathy quality to the timbre. There is a way of adding a noise generator to another track and then side-chaining (keying) it to play in sync with the output from ReaSynth, though — but this is quite tricky to set up and something for another time. We can only hope that a noise generator will feature in a future incarnation of this plug-in!

Next I’ll describe how you can modify the sound using an envelope and filter. In the plug-in, a standard ADSR envelope is provided to shape the amplitude of sounds over time, and of course these parameters really help to define the character of the sound. For example, a slow attack combined with a high level of sustain yields a more ‘stringy’ timbre, whilst a fast attack/decay with a low 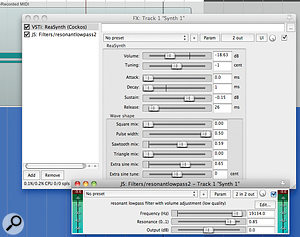 Unfortunately, there isn’t a filter included with the plug-in, but this deficiency is easily overcome by using one of the several filters provided by the standard Reaper installation. Some of the most simple and effective low-pass filters can be found in the JS plug-in collection, for example the ‘Resonant low pass 2’ filter shown in the second picture. Try it out now:

This particular plug-in has a very low CPU overhead, but also an output control that can be used for attenuation given high levels of resonance. Level meters in the plug-in window are helpful for monitoring the signal passing into the filter from the synthesizer and the output; the output fader on the filter defaults to a value of -3dB to allow for really squelchy, resonant sounds that may otherwise cause clipping.

Conversely, when using low to medium levels of resonance, use of the filter will result in the output level being reduced overall. In this case, the output volume will need to be reset to 0dB, or even boosted beyond this point. To add more variation over time, an auto-filter effect can be applied by automating the cutoff point. This is achieved with an LFO and parameter modulation as I have outlined above — this time with the LFO being mapped to the frequency setting on the filter.

A range of MIDI effects are provided within the JS collection, and these can be used to enhance the performance being played. The effects available include exotic MIDI filters and transformers, but it is perhaps the synth-nut’s favourite — the humble arpeggiator — that would usually be the first port of call. As these effects are modifying the MIDI data stream entering the ReaSynth plug-in, it’s crucial that these are placed before the synthesizer in the effects chain, and this is illustrated in the third picture. Here’s how:

Note values within the arpeggio are defined using the ‘rate (x BPM)’ parameter. 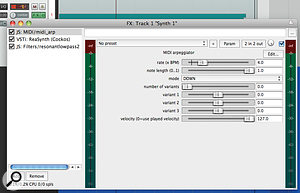 The JS MIDI arpeggiator plug-in, situated at the top of the effects chain. Here, the rate has been set to 4 x bpm, resulting in 16th notes, and note length remains at 1 to give longer notes. A setting of 2 here would give two notes per beat, 4 would give four notes per beat, and so on. Note length can also be manipulated, with reduced values leading to more punctuated, staccato arpeggios. Further parameters allow control over the direction of arpeggios (up, down or both) as well as variant options that cause the arpeggio to jump between multiple octaves. Patterns played by the arpeggiator become more and more complex as the number of variants and the note rate increase, whilst the note length decreases. Automation can, of course, be used to record the changes made to these controls over time.

From here on in, it’s a case of adding further audio effects processors to modify the texture and frequency content of the sound. Stereo delays, overdrive, auto-wah and modulated delays (chorus, phaser, flange) are obvious candidates in this respect. Some careful chaining of these effects will assist in the creation of really special custom synthesizer patches.

Reaper’s ReaSynth plug-in can produce compelling results if you tweak a few parameters and introduce additional plug-ins to the effects chain, to further modify the audio and MIDI components. Combined with parameter modulation, additional effects and automation, more interesting textures start to emerge and any work invested in creating the sound really pays off.