Pro Tools often turns up its nose at corrupt WAV files. Here’s how to bring them into line.

If you often work with audio that has originated with other users and other applications, you may well have had the experience of coming across a WAV file that Pro Tools simply won’t recognise, even though it appears to work perfectly well elsewhere. In this month’s workshop, we are going to look at a number of ways to get this kind of troublesome WAV file safely into Pro Tools. 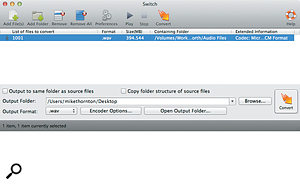 Quite often, simply converting a dodgy file from WAV to WAV will allow Pro Tools to read it.

Having run into this situation numerous times, there are a number of software packages I have on hand in order to convert and/or fix problematic files so that Pro Tools will recognise them. Switch is a freeware converter application that is available for both Mac and Windows. It is designed to convert between different formats, but I have found that using Switch to convert a file from a WAV to a WAV can help Pro Tools to recognise it.

Once you have it installed, open Switch and drag the offending file into the Switch window. Make sure the option to output to the same folder as source files is unticked: when fixing files, it is best to make sure you don’t mess with the original, in case you make matters even worse than they already are. I tend to leave the output folder set to the default, which is the desktop of your computer, but you could choose any location you prefer. Set the output option to ‘.wav’ and hit the Convert button. At the end you will have a new WAV file that, all being well, will now import into Pro Tools.

Switch will fix many files, but not all, especially if the header information in the WAV file has been badly damaged. For more extreme cases, Pro Tools veteran and all-round guru Rail Jon Rogut has produced WAV Fixer for Mac, which can fix damage to header information such as the FMT chunk that describes the format of the file. You can select multiple files, and you need to tell the program the sample rate and resolution of the files. It will create copies of the bad files and repair the copies. WAV Fixer works in a similar way to Switch except that it doesn’t support drag and drop, so you’ll need to click on the Select Files to Repair button, navigate to the problem file and select it that way. Again you can choose any destination folder, but Rail has very sensibly prohibited the source and destination folders from being the same, making it impossible to overwrite the original file. 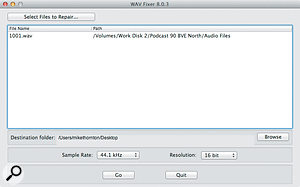 Rail Jon Rogut's WAV Fixer is designed specially for converting recalcitrant files into a format that Pro Tools can read.

Because the header information has been damaged, it is important to set the Sample Rate and Resolution properly. If you don’t know what they should be, then it may take a few attempts to find the correct settings. If you get it wrong, it will be very obvious when you try to play the repaired file in Pro Tools: it will either be distorted or play at the wrong speed and pitch, or both. Once you have set these options, click on the Go button and WAV Fixer will create a copy of the problem file with new headers.

Many Mac owners will be familiar with the venerable Soundhack, a freeware application that was originally released on October 26, 1991! Despite its age, Soundhack still works, and its makers say they have tested it under Mountain Lion. Soundhack has header fixing options as well as sample rate fixes, and will even open a WAV file that doesn’t have any headers. (It also does loads more than fix problem audio files, so do check it out, especially if you are into sound-design work.)

In extremes, you may need to use an application such as Soundhack to write new header information to a file.

To mend a dodgy WAV file in Soundhack, open the errant file using the Open Any menu option in the File menu. Soundhack will warn you if it’s a headerless file; click OK and you will see a small window containing what information Soundhack is able to extract from the file.From the Hack menu, select Change Header, and set the information as best you can. As with WAV Fixer, if you don’t know what the sample rate and word length should be, it might take a few attempts to get it right. Once you’ve set the relevant header parameters, click Apply and Save Info, then go back to the File menu, choose Save A Copy, set the Format to Microsoft Wave and the Encoding to the appropriate bit depth. Then select the appropriate location to save the file to, before clicking on the Save button.

There are, however, times when none of these utilities will help. I have been in situations where I have been able to open the errant WAV file only in an application such as the open-source VLC, which for some reason seems to be able to open and play most things. However, as VLC is only a player, it can’t save a ‘fixed’ version of the file. What’s needed is a way to capture its output in real time and record that to a new file. 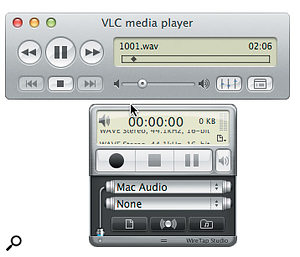 Sometimes only a player application such as VLC will be able to read a problem file. In that case, you need an audio capture utility to record its output in real time and create a new file.

There are a number of Mac applications that can do this, including Audio Hijack Pro, Audio Record Pro and WireTap Studio, the one I own. PC users seem to have fewer options where it comes capturing system audio, but apparently version 2.04 and later of Audacity will capture audio on Windows Vista, Windows 7 and Windows 8. (If you are using an audio interface with its own mixer and routing utility, it may also be possible to set up a ‘loopback’ arrangement so that VLC’s output is presented as a conventional audio input to a recording program such as Pro Tools. This is straightforward on Focusrite’s Saffire Pro 40, for example.)

Choose the player that will play this rogue file, then open your audio capture software — in my case WireTap Studio — and set it to pick up the system audio so that it will record anything that comes through the Mac’s audio output. This will also include alert sounds from Mail, Facebook and so on, so be careful what else you have open at the same time! Once you are ready, set the audio capture software recording first. When you are happy it is recording, press Play on VLC, and wait until the entire file has been played through. Once it’s done, click on the Stop button, and an edit window will open in WireTap Studio. From here you can trim the start and end, then use the Save option in the File menu to save your new WAV file in an appropriate location. Job done.

Although this may not be the most elegant solution, and it can be time-consuming with long files, the audio doesn’t come out of the digital domain, so the results should be pretty close to being a perfect clone of the source file — close enough, hopefully, to get you out of a nasty hole!

The recent 11.1 update to Pro Tools 11 included a number of new features, which are worth investigating if you haven’t already seen them. One such is Avid’s Pitch II, a great addition to the bundled plug-ins. Not be confused with pitch-correction plug-ins such as Auto-Tune, Pitch II is a simple pitch-shifter which can be used in real time as an AAX Native or AAX DSP plug-in, or as an AAX AudioSuite plug-in for offline processing. One of its main applications is to thicken instruments and voices by making fine tuning changes which are then mixed back into the original; alternatively, you can use it to transpose audio by specific intervals. The granular technology it employs chops the audio up into tiny grains and then reassembles them, which means any pitch-shifting does not affect the speed or timing of the audio.

You can use Pitch II just like we used to use old hardware pitch-changing units and recreate what I always think of as the ‘99s’ preset; this process had different for names different units, but involves thickening a sound by creating slightly detuned copies that are panned hard left and right. From this point of view, the great news is that Pitch II works as a mono-to-stereo effect as well as a stereo-stereo effect. For added flexibility, Pitch II also includes a delay line and a low-pass filter.

In the latest Pro Tools version 11.1, the Clip Rename window has had a makeover. This is the little window that opens when you double-click on a clip in the Clip List or with the Grabber tool on the timeline. Avid have made two improvements to this little window. First, they have added a Clip Info section, which shows a lot of information about the clip, including the number of times the clip has been used, and its rating value if it has one. This is great when comping: you can give each clip a rating from 1 to 5 to help you determine which is the best take for each phrase. The name of the Parent Clip is also displayed, and can be really helpful, as can the timestamp data, which tells you where the file was on the timeline or in relation to the embedded timecode when it was recorded.

The second improvement is that you can now resize the Clip Rename window, which is really useful when the name gets long.