Track automation is enabled by default, although it can be switched off. To confirm that it is enabled, go to the Track Editor Automation section and make sure that 'Show' is ticked. You can access all track automation parameters from the Track Editor in the area under the automation header. Click the arrow on the left of the header if it's not showing. Right-clicking on the Rd [Read], Effect and Parameter elements will open a contextual menu, and it's worth spending some time getting familiar with this menu. 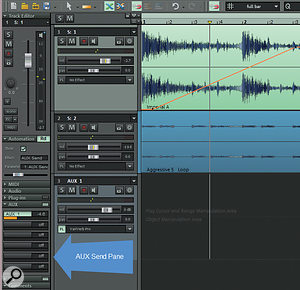 The Aux Send automation pane. Aux 1 is active, as is the Aux Enable button.

Once nodes have been inserted, you can grab them to adjust the curve accordingly. If you want to adjust multiple nodes, click on the first node and Shift-click on the last node: any nodes between them will also be selected. You will then be able to move them together, while retaining the relative curve variations. You can also Ctrl-click to select multiple non-contiguous nodes. Selected nodes can be deleted by pressing the Delete key.

You can automate both Samplitude's built-in plug-ins and third-party VST effects on a per-track basis. If you open the automation contextual menu, you will see several 'hard wired' automation parameters at the bottom of the list. Besides the already mentioned Volume and Pan, there are also selections for Surround X, Surround Y, Tempo, Aux send and EQ.

For this example, I'm going to use the Magix Ecox delay plug-in. Click on the track insert slot and choose this plug-in from the Delay/Reverb category. From the programs menu at the top left of its GUI, choose one of the presets (I rather like 'Saturday's Inserts' as a starting point). Next, open the automation contextual menu. Ecox should now be visible near the bottom, so select it to access a list of automatable parameters. Choose a parameter such as '8: Width', and a curve pertaining to that parameter will be overlaid on the track. You can now add some nodes to that automation curve and adjust to taste. Now when you begin playback, the percentage of stereo width will be controlled by the envelope shape. Notice also that the plug-in's Stereo Width knob moves accordingly. If you want to automate another Ecox parameter, choose it from the automation parameter list and the relevant curve will be overlaid on the track.

Unlike some DAWs, Samplitude Pro X doesn't have multiple automation lanes for individual tracks, so all automation curves visible on a track appear superimposed upon each other. However, if you open the automation menu, you'll find three display choices: 'Show only selected curve', 'Show all curves (not selectable)' and 'Show all curves (selectable)'. The third is probably the most practical. In the second, all curves are displayed, but only the currently selected one remains editable.

You can also write automation curves in real time using a keyboard modifier plus the mouse. To do this, open the editor window for the desired plug-in and begin playback. Now press Ctrl and Alt and move the parameter you want to automate with your mouse. Your parameter changes will be written in real time to your track. Note that this method works with all track automation but not with Object automation. If especially dense passages of automation have been created, open the automation contextual menu and choose 'Edit Selected Curve / Thin out'. There is also an option to enable snapping of automation nodes (when moving) using the active snap value. Press 'Y' and go to 'General / Use snap for automation curve points'. You can use the Alt modifier to bypass snapping.

Aux sends can also be automated. 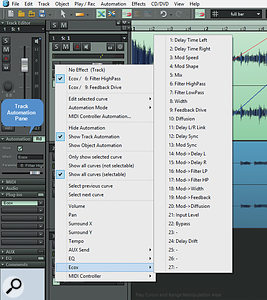 This screen shows the Track Automation pane, with the automation contextual menu displaying available parameters for the Ecox plug-in. Note that the Track Automation Show box is ticked. Suppose you want to vary the amount of reverb you're applying to a track by automating the level of Aux send 1. First, add a new Aux bus from the Track menu (Track / Insert New Tracks / New Aux Bus). Now select the Aux Bus track's insert slot, navigate to Delay/Reverb / Variverb Pro, and choose one of the aux/init presets from the list. Click on the 'Aux enable' button to the right of the Aux header in the Track Editor. Select the source track, open the track editor automation menu and choose Aux Send / 1: Aux Send 1. The corresponding automation curve should now be visible along the bottom of the track. The name 'Aux Send' will be displayed in the Effect box of the automation pane, and '1: Aux Send' in the Parameter box below.

Now insert an automation node, using your preferred mouse mode, then a second node further to the right. Left-click and drag that second node upwards to create a transition from node 1. Finally, click on the small arrow to the left of the Aux header in the Track Editor to reveal the Aux Send pane. Click the first button below the arrow to enable the first send. Place the play cursor before the first node and begin playback. You should hear the reverb gradually increase as the track plays back.

All the same effects and parameters can also be automated for individual audio Objects, with obvious advantages in some circumstances — for instance, if you duplicate or move an Object, all its automation comes with it. 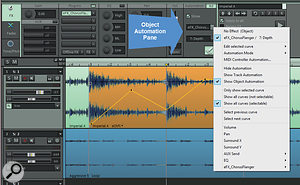 Object Automation is active here, and the Object Automation Show box is ticked. To use Object automation, select an audio Object, then double-click to open the Object Editor, or use the keyboard shortcut Ctrl-O. Make sure the 'Show' box is ticked in the Object Editor automation section to the right of the volume fader. Click on the first plug-in slot of the Object Editor and navigate to Modulation / Special / eFX Chorus/Flanger. Next, click on the 'No Effect' field in the automation pane to open the contextual menu. The eFX Chorus/Flanger will now be in that list, so select it and choose a parameter to automate from the contextual menu. The name of the effect should now be shown in the effect field and the active parameter in the field below. Click on the pencil icon below to activate automation draw mode, and the relevant curve for that parameter will be overlaid on just that audio Object. You can now use the pencil to insert single nodes or to draw automation shapes. When you've finished drawing in your automation, make sure you remember to deselect the pencil tool to return to your usual mouse mode.

If you prefer the tactile feel of hardware when writing automation, Samplitude supports various control surfaces, including the Avid Artist Series, SSL Nucleus and Mackie Control. Press 'Y' to open the System Options and select 'Hardware controller' to enter the hardware controller setup window. You can activate Eucon (for Avid Artist Series controllers) by ticking the Activate Eucon box. For other controllers, click on the 'Add new' button to browse a list of factory presets for supported controllers. You can also create custom mappings for unsupported controllers.

For more on Samplitude Pro X's sophisticated automation features, check out the video that accompanies this article at /sos/mar13/articles/samplitudemedia.htm.