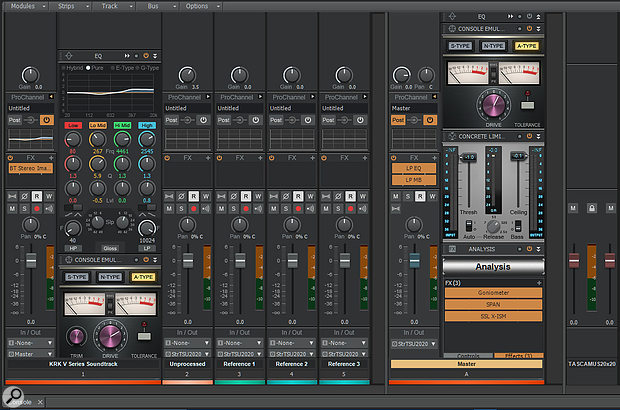 Get your tracks ready for the world with Sonar’s mastering-friendly options.

They say it’s a ‘singles world’ these days — not in reference to dating, but in terms of music being listened to as tracks in a playlist rather than as part of an album. Sonar is a very capable mastering program for this application.

Although not a stereo digital editing program like Wavelab or Sound Forge, more and more Sonarians are mastering in Sonar. To do functions like restoration (eg. hiss reduction), add PQ codes, or do DDP exports you’ll still need to ‘accessorise’ Sonar or export your projects to a different program, but Sonar’s toolkit is sufficiently sophisticated to perform the essentials of high-quality single-track mastering. There are also some features that actually make Sonar better-suited to mastering than typical two-track audio editors.

A crucial mastering element is setting up a proper workflow, so let’s start there and then move on to other tips.

There are many ways to set up Sonar for mastering, but the following, pictured in Screen 1, has worked well for me. The overall signal flow is listed in order; processors (in brackets) indicate typical treatment choices. The audio channel contains your final stereo mix.

For the first ProChannel, I usually choose the QuadCurve EQ’s Pure mode. This is a ‘non-surgical’ tone-shaping mode that recalls the classic Pultec EQ and provides gentle tone control. Sometimes I’ll add the Console Emulator Channel afterward to give a little more definition. It’s subtle, but makes a difference. The FX Rack, which is post-ProChannel, includes a stereo widener if needed. Sonar’s Blue Tubes Stereo Imager is suitable if you don’t push it too far.

The track output terminates in the master bus. Its FX Rack has the LP EQ and LP MB. If you haven’t discovered how great these are, check them out — they’re light-years ahead of the older linear-phase processors. In particular, the LP EQ can have separate EQ curves for the left and right channels, as does Mid-Sides processing — great for mastering when you want to give a bit more ‘air’ to the left and right components for a wider apparent stereo image, as well as for pulling bass into the centre channel if you’re considering a vinyl release.

To set the master bus ProChannel to post-FX Rack, right-click on any module header and then choose ‘Post FX Rack’. This ProChannel includes a Console Emulator (again, not something you’d use every time) and the Concrete Limiter to catch any transients that make it past the LP MB. This allows for the high average level so common in today’s music, but without interfering too much with dynamics.

The final FX Chain module is for analysis, and the tools I use are all free downloads. The first is Gonio3, a phase/correlation VST plug-in from UK Music (download from www.uk-music.de/downloads.html). It displays a correlation meter that indicates a stereo signal’s phase relationship: a correlation of +1 indicates that the left and right channels correlate 100 percent, meaning they’re completely in phase. Next up is Voxengo’s SPAN plug-in (www.voxengo.com/product/span). This spectrum analyser includes K-System loudness metering, headroom estimation and clipping detection. Finally, there’s SSL’s X-ISM (http://solid-state-logic.co.jp/music/X-ISM/index.html; registration required) to show potential inter-sample clipping, as explained on its download page. 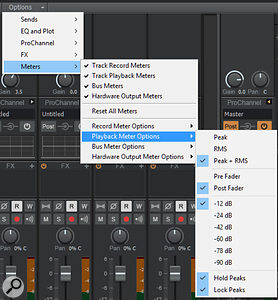 Screen 2: Sonar’s metering is extremely flexible, making it ideal for mastering.There are also several preferences in the Options menu that I like to change when mastering. Click Options / EQ and Plot / Plot Resolution, and change it to 6dB. (If you’re applying more than 6dB of EQ, you probably should rethink your mix.) Also under Options, select Meters / Playback Meter Options, and choose Peak+RMS for an indication of both the peak and average levels, as well as Post Fader and the -12dB meter range option (Screen 2). When mastering, I’m more concerned with what’s happening in the upper 12dB than whether there’s noise at -80dB. You might prefer the -24dB range for projects with more dynamic range than typical pop music (eg. classical and jazz).

Enabling Hold Peaks and Lock Peaks is helpful for when you look away for a bit and miss when a peak has happened. I use all these same meter options for the Bus and Hardware outputs.

Once you’ve created a mastering setup like this, save it as a template (CWT suffix) so you don’t have to recreate it from scratch next time.

For those who are relatively new to mastering, it helps to choose tracks you feel are particularly well mastered and use them as references. Then, as a reality check, you can switch back and forth between the track you’re working on and the references. But there’s another reference I consider equally important: referencing the mastered and unmastered versions of the same track, but with their levels balanced so you can hear what the mastering is actually doing (this is the purpose of the ‘Unprocessed’ track in the mastering setup screenshot). When you add multiband compression, limiting and so on, you’re increasing the average level enough that you can fool your ears into thinking you’re making your track sound better, rather than simply louder, so it’s important to compare the before and after versions at the same subjective level.

To create the unprocessed track, copy the audio clip you’re mastering to its own track and set levels so the peaks hit -0.1dB, or whatever peak level you’re aiming for with your final, mastered track. Hopefully you didn’t slam the levels on your stereo mix so there’s several dB of headroom, in which case you’ll likely need to turn up the unprocessed track’s input gain by several dB.

Meanwhile, you can add a few other well-mastered tracks you’d like to use as references. Again, set their levels so the peaks hit the same peak level you’re aiming for with the mastered track. As to why I chose -0.1dB, you want to avoid hitting zero not so much because of fear of distortion (after all, it’s not going over zero) but because if you’re planning for a CD release, many CD duplication houses will reject a master if it hits zero for a certain number of consecutive samples — the assumption is that this could indicate clipping. However, I sometimes need to reduce the level to lower than -0.1dB if the X-ISM plug-in (mentioned earlier) shows the potential for inter-sample clipping. 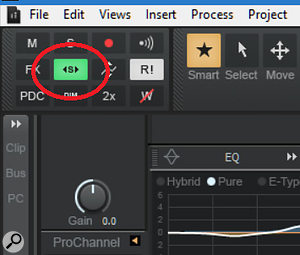 Screen 3: Using Exclusive Solo makes it easy to compare the track you’re mastering to the various reference tracks.The most important point to remember for the reference and unprocessed tracks is to send their outputs directly to the hardware output bus, not the master bus — you don’t want your references to be processed by the various master bus modules. And to make comparing easier, choose Exclusive Solo so you can listen to individual tracks simply by hitting solo to mute the other tracks (see Screen 3).

So far, we’ve dealt solely with Cakewalk-related processors, aside from some free plug-ins. However, there are many other options that provide all-in-one solutions or particular ‘mojo’. For example, you can remove the LP MB from the master bus FX Rack, then replace the ProChannel’s Concrete Limiter with the Waves L3 Multimaximizer (my personal favourite for ‘maximisation’ effects). I particularly like this processor because you can change the amount of limiting for each individual band, and you can also adjust the crossover frequencies. So, for example, you can give a little bit of lift to the upper mids, or have less compression in the lower mids to avoid any trace of ‘tubbiness’ in the sound. Remember, you can host this in the FX Rack, or in an FX Chain for insertion in the ProChannel.

Fans of iZotope Ozone can also substitute modules as needed. Considerately, iZotope offer the integrated modules as individual plug-ins, so, for example, you can replace the Blue Tubes processor with iZotope’s Imager, or use their maximiser instead of the Concrete Limiter. It’s all good.

Sonar offers several useful mastering features that are either clumsy or impossible to do in traditional stereo editors. Automation (clip- or track-based) makes it easy to bring up that weak intro by a few dB; you can add accents (eg. a snare hit with a big reverb splash) to another track, and when assembling albums from your mastered tracks, implement crossfades.

When your track to be mastered is exactly as you want, bounce it to another track so it’s contained within the project, and/or export it. In any event, I highly recommend saving the entire project — after listening to the song for several days under various listening conditions, you might want to tweak some of the settings. But don’t get too crazy with the tweaks — sometimes you need to finish what you start!