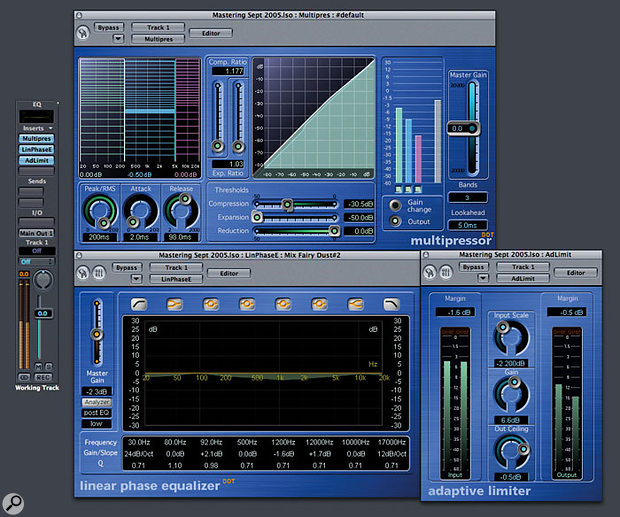 Here you can see a good all-purpose mastering configuration within Logic, made up of Multipressor, Channel EQ (or Linear Phase Equaliser), and Adaptive Limiter plug-ins in series.Photo: Apple

More tips on mastering your tracks this month, specifically for those musicians who find themselves limited to using Logic 's own bundled plug-ins.

Last month, I had a look at how I approach mastering tasks in Logic. However, I used a number of third-party plug-ins which musicians on a budget may not have access to, so this month I wanted to pass on some advice for those trying to master their own tracks using Logic alone.

If I had to do a mastering job using only Logic 's own plug-ins, I'd set up a three-band Multipressor to handle the overall compression, and team this with Logic 's Channel EQ, though I'd also try the Linear Phase Equaliser to see which gives the best results on a specific mix. Normally I'll set my Multipressor crossover frequencies to around 120Hz and 5kHz so that the vital mid-band isn't split. By balancing the levels of the three bands, you can also control the bass and treble regions of the mix quite effectively. As with all mastering jobs, I tend to start out with very low compression ratios (1.2:1 or thereabouts) and then use a low threshold (which typically ends up between around -30dBFS and -40dBFS) to get just a little gain reduction happening. Any more than a few decibels (3-6dB maximum) in mastering is usually excessive, though some styles of music can accept more squashing than others.

Logic 's Adaptive Limiter makes a useful end-of-line limiter, and it can also be used to bring the signal peaks up to maximum without you needing to add gain elsewhere in the chain. One process that I haven't been able to replicate in Logic is the multi-band tube-distortion emulation included in my Drawmer DC2476 mastering processor. This is really handy if you have track where the bass end just doesn't seem dense or warm enough, for example. You can add 2-5dB of tube drive to really pump it up without messing up the mid-range or the high end. Similarly, if you have a track where the high end is weak, you can add tube drive just to the top band to spice up the harmonics and add density. You can also increase the compression ratio of the high band slightly. I rarely need to add tube drive to the mid-band, but there are occasions where it works.

Getting back to Logic and its plug-ins, Match EQ can be useful for fine-tuning one mix to make it sound more like another, but even if you decide not to use it, the 'difference' curve that it calculates based on the source and destination material can give you useful clues as to where you may need to apply EQ. In my experience, Match EQ is seldom entirely successful if you just apply 100 percent of what it comes up with, but if you adjust the curve manually, change the smoothing settings, and adjust the amount of correction applied, it can be extremely useful. As with any mastering task, your ears must be allowed to have the final say — don't let flashy graphics and frequency curves convince you that something must be right if it still doesn't sound right to you.

For final limiting, though, I find the Powercore Brickwall plug-in particularly good, though I've also used the Waves L1 and L2 plug-ins on numerous occasions and always found them extremely effective. Whatever limiter I use, I try to set it so that it only limits the loudest signal peaks by a few decibels — if your final audio file looks like a freshly mown lawn side-on, you've probably overdone it, though some commercial mixes have gone out in this state. Limiting comes at the end of the track processing chain, but you still need to mix your final work to 24-bit files rather than 16-bit, as there may be further small gain adjustments to be made at the playlist stage, and dithering down to 16-bit resolution has to be undertaken as the very last process before burning your master disc.

I like burning CDs from Roxio Jam, because it can dither for you, so you just assemble a playlist comprising 24-bit, 44.1kHz files and it does the rest. Within Jam I audition the transitions between songs and look for a subjective similarity in loudness. Don't trust the meters or assume that all normalised tracks will sound the same volume, because they won't. My technique is to pretend that I'm listening to a band on stage and then to adjust the relative levels where necessary so that the performers don't seem to get closer or further away between tracks. Although Jam can turn levels up as well as down, you'll almost certainly have processed your individual tracks to peak very close to 0dB, so it's best not to increase the gain for risk of going into clipping. Track gaps or crossfades have to be created by trial and error, as the subjectively correct gap length depends on how different the songs are, how quickly or slowly the last track fades to silence and whether the new track creeps in or comes in with a bang. 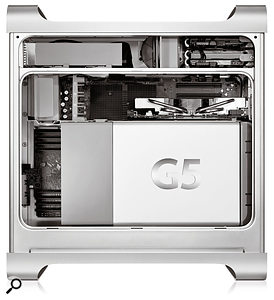 Reports have been trickling in from the few lucky Logic users who have purchased Apple's new Quad G5 Power Macs. Everything seems to be working smoothly — unless of course you have a PCI-based audio card, in which case you'll be kicking yourself because the new Macs come with PCI Express slots, which are totally incompatible with PCI. One area of concern is that several users aren't getting the Logic performance they may have expected from a computer which is, effectively, a four-processor Macintosh. Several people have reported that Logic is throwing up Out Of CPU Power error messages when the Mac OS X Activity Monitor is showing plenty of CPU overhead. Using the old 'stop then start Logic ' trick, which spreads CPU load evenly over the two processors in dual-processor Macs, seems to work with the quads as well.

This problem is all the fault of Logic 's primitive CPU monitor. Mac OS X itself spreads the processing load evenly for all programs, but Logic 's CPU monitor seems to live in a world of it's own. Once one of the CPU monitor bars hits the red Logic complains that it has run out of processing power, instead of off-loading the extra processes onto the next CPU. This behaviour is a left-over from dual-processor G4's running Mac OS 9, when Logic itself controlled processor load by using one CPU for audio and the other for everything else, and it really needs to be updated very soon. The fact that Logic 's CPU monitor only shows two CPU usage bars on a quad-processor Power Mac doesn't inspire confidence that Logic is aware of the extra processing power available on the new computers. I assume Apple are working hard on a new version of Logic that can take better advantage of the new Mac's power.

Logic also has some memory-usage limitations, so loading your new G5 Quad with 16GB RAM may not provide the performance boost you were hoping for. Logic itself can apparently use up to 4GB of RAM — but that includes some RAM for sample libraries as well as for the plug-ins and core software. This figure has been disputed — some people will tell you that Logic can only use 2GB Ram, but I've been able to get the software to use over 3GB on my G5. Hopefully this will change in the future if and when Logic becomes a true 64-bit application. Of course, extra RAM will allow you to run all those extra programs alongside Logic without impacting on the sequencer's performance, so it's still a good idea to get as much RAM as you can afford.

Finally, there have been some reported problems with Logic and the latest Mac OS v10.4.3 update. These include MIDI and audio not working anymore and Logic crashing on booting, although I've not had any problems personally. Each OS update is a shot in the dark for Logic users and I'd advise caution whenever a new update is announced. It's always a good idea to have the latest OS revisions and Security updates, but these can have subtle and unpredictable effects on complex combinations of hardware and software. My advice is to back up your whole hard drive before updating and keep an eye on the various Logic forums before jumping in with any OS updates. Stephen Bennett