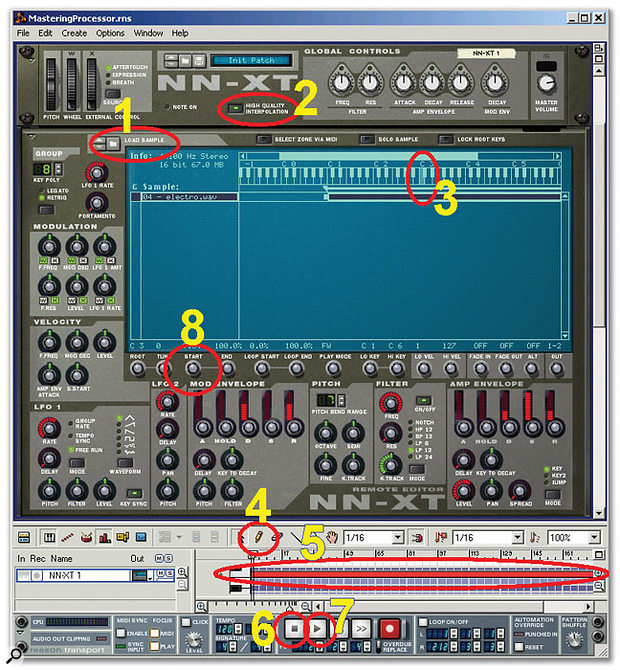 The numbers identify the relevant features of NNXT and correspond with the steps listed in the text.

Reason can be a simple yet surprisingly sophisticated mastering suite — and not just for audio generated in the Reason environment.

With the addition of the MClass processors in Reason 3, Propellerheads addressed the fact that Reason had been a studio without a mastering suite. Prior to v3, people would export their masterpieces as audio files, then complain about a "wimpy" sound — until the file found its way into the hands of a good mastering engineer. Now much of that kind of work can be done inside Reason itself. For a detailed description of the new MClass processors and how to use them to master material generated within Reason, check out the article 'Mastering Your Mixes in Reason 3 ', in the November 2005 issue of Sound On Sound.

Reason 's mastering processors are even good enough that you might want to try using them for mastering audio files generated by other programs, such as Cubase, Live, Sonar, DP, Logic and so on. (And to the list of MClass processors I'd also add subtle use of the RV7000 reverb as suitable for mastering, if your material needs a bit more ambience.) Although the conventional wisdom is that Reason isn't suited for digital audio-based signal processing, that's not really true. You can load digital audio files into the NNXT or NN19 sampler, play them back through the processors in real time, tweak the settings, then export the audio to disk.

Although it's touted as a sampler, NNXT can play back any digital audio file, including ones that are quite long (within the limits of available RAM, as it doesn't stream from disk). So you may not be able to fit an entire CD in there, but you can certainly fit most songs.

So why use NNXT instead of NN19? Either will work, but NNXT allows layering. So if you want to crossfade two songs, or add another last-minute effect or transition, you can do so very easily. You don't need to load a patch, as the Init Patch works just fine for our purposes. Here's the step-by-step process for setting up the NNXT file player; the steps correspond to numbers on the screen shot, left.

1. Click on Load Sample, navigate to the sound file you want to master, then click on OK. The NNXT accepts WAV or AIFF files, 16-bit or 24-bit; however, if you load 24-bit files, note that the MClass processors do not include dithering. For many types of files this won't matter, but it probably will for acoustic music.

2. Click on High Quality Interpolation, as you may want to change the pitch. We'll discuss why shortly.

3. At this point, the sample is sitting inside NNXT, with the root note at C3.

4. Go to the sequencer and click on the Pencil tool.

5. Draw a very long note at C3 — long enough to last the entire length of the song.

6. Double-click on the Stop button to send the Play cursor to the beginning of the sequence.

7. Click on the transport's Play button and you'll hear the file.

Although using Reason in this way doesn't allow for true random-access playback within the file, you can come close by modifying the sample Start point.

In addition to the sample Start-point trick mentioned above, there are also some advantages to using looped playback. For example, one part of the file may be considerably louder than the others; this is what you'll want to listen to when adjusting the Maximizer, to make sure that the sound doesn't get squashed too much as you increase the level of maximisation. To loop a portion of the file:

The Start, Loop Start, Loop End and Play Mode controls are the keys to providing looped playback. 1. Adjust the Start point for where you want the loop to begin.

2. Match the Start-point control's setting with the Loop Start control.

3. Set the Loop End control for where you want loop playback to end.

Now, when you start playing the sequence (remember, you always have to start from the beginning) you'll hear only the looped portion.

One fun aspect of using NNXT for playback is that you can alter pitch, just like in the old days when hit music producers routinely turned up an analogue tape-recorder's variable speed control by a few percent. There are three ways to do this with Reason:

Mastering Suite: Out Of Order? 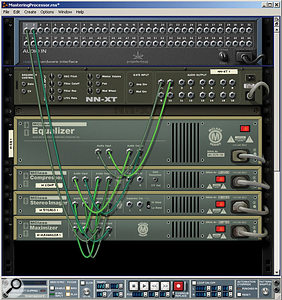 Here's the patching for the mastering suite I like to use, as viewed from the back of the rack. While SOS 's November 2005 article on mastering with Reason 3 gives one example of a mastering configuration based on Reason 's MClass Master Suite Combi, the signal flow shown in that example is not the only one that's possible, and other variations may be more effective with different types of material.

Obviously, for the application presented here, NNXT must go at the beginning of the chain, because it's providing the signal to be processed, and the Maximizer should go at the end, because it's designed to catch peaks and prevent 'overs'. Anything inserted after it could introduce peaks again. But the order of the other three modules is open to debate; I tend to go with EQ, Compressor, Stereo Imager.

Another issue is which order you prefer for EQ and compression. I prefer EQ first, because any peaks caused by serious equalisation are tamed by the compressor. But you could also argue that compression after EQ 'undoes' some of the EQ's effects, and you might therefore want to place the EQ after compression. Some of this depends on how much EQ and compression you use; as always, your ears are the best judge.

Something even most digital audio editors won't let you do is automate levels throughout the file, which you can certainly do in Reason. You can fade in to the file, fade out, or even change gain in particular passages. As an example, if one section is considerably softer or louder than the rest of the file, rather than relying on compression to smooth things out, you can use automation to reduce the level of the over-loud section. To do this: 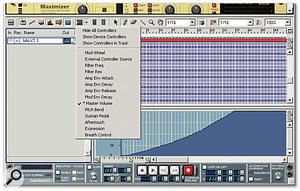 Most digital audio editors don't allow for parameter automation, but Reason does. This screen shows a fade-in that's been added to a file. 1. Click on the Show Controller Lane button. The controller lane appears.

2. Size the controller lane as desired for easy viewing.

You can use the same basic principle to automate pitch-bend, if you want to do variable-speed tricks as mentioned earlier.

Now that you're done with mastering, don't forget to go File / Export Song as Audio File. If you've come up with a great mastering setup, shift-click on all the devices you used, right-click on one and select Combine: they'll end up in a Combinator patch, at which point you can save your efforts as a preset.