Our monthly round‑up of news and tips for PC musicians takes in faster AMD quad‑core processors, assesses Microsoft's innovative Songsmith program, and offers a guide to the mysteries of defragging. 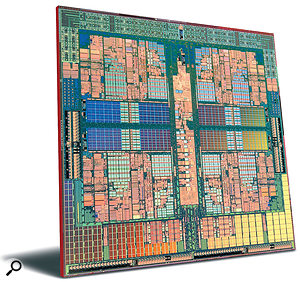 AMD's new Phenom II processors may not set the world alight performance‑wise, but they do offer good upgrade potential for existing AMD‑using musicians, and some welcome competition for Intel, so that CPU prices remain keen.Photo: Caption

At long last, AMD have unleashed some fresh competition into the CPU arena, courtesy of their new Phenom II range. The original Phenom range was disappointing, to say the least. Unlike Intel's 'two dual‑core chips in one package' approach, it did place all four of its cores onto one chip 'die', but unfortunately this didn't result in increased performance. It also used the 65nm manufacturing process and drew a lot of power, resulting in higher operating temperatures — and hence more acoustic noise generated to keep it as cool as its competitors.

This time around, there's rather more to get excited about. Two Phenom II X4 quad‑core models were released in early January 2009, with the 920 clocking in at 2.8GHz and the 940 at 3GHz, and the manufacturing process has changed from 65nm to 45nm (in line with Intel's latest Core 2 Quad and Core i7 ranges), resulting in lower operating temperatures and faster clock‑speed capability. The L3 cache size of the Phenom II X4 range has also increased by a factor of three over its predecessor, from 2MB to 6MB, which means that more calculations are possible before the CPU has to retrieve data from slower system RAM.

As always, benchmark tests reveal a 'swings and roundabouts' situation, with the Phenom II X4 940 faster than the similarly‑priced Intel Core i7 920 in the case of some games, but up to 30 percent slower in some others. Overall, the more expensive Core i7 still comes out significantly in front, with the Phenom II X4 940 performing closest to Intel's almost identically priced Core 2 Quad Q9400.

However, the financially challenged will be pleased to hear that these initial release Phenom II processors can run in existing AMD Socket AM2+ equipped motherboards, making them a far more cost‑effective upgrade than switching to an Intel‑based system that requires a new motherboard as well. Another advantage of the Phenom II range is that it can routinely be overclocked (ie. run faster than its rated speed) by a significant margin. One DAW builder is already advertising systems with the Phenom II 940 3GHz model running at over 4GHz!

Moreover, as I write this, AMD have just released five new models of Socket AM3 Phenom II that support the faster DDR3 1333MHz RAM. As I explained in PC Notes December 2008, those routinely running lots of samples can benefit from the increased memory bandwidth of DDR3, because of the sheer volume of data being transferred from system RAM to the CPU, and a Phenom II X4 DDR3 system will be considerably cheaper than a DDR3 Core i7 system, potentially making it a serious contender for the fiscally‑challenged samplist.

While you'll need a new motherboard equipped with AMD's new Socket-AM3 to reap the DDR3 benefits, AMD are to be applauded for making these latest Phenom II processors pin‑compatible with existing Socket AM2 motherboards, so you can buy one and run it in your current AMD PC until you can afford to upgrade your motherboard and RAM.

Overall, the Phenom II range is good news for the musician, since they can once more 'go AMD' and get good performance on a budget. Even for those thinking of paying more for the better performance of an Intel Core i7 system, this extra competition from AMD should ensure that Intel CPU prices remain keen.

Microsoft initially received a very mixed reaction to their Songsmith application, largely because of one of the cheesiest video commercials I've ever seen (you can watch it at www.youtube.com/watch?v=3oGFogwcx‑E). However, it's actually a very clever piece of software that lets you choose a musical style and sing a song into your PC's microphone, and then creates an instrumental backing to this melody.

Songsmith runs on Windows XP with Service Pack 2 or 3, or Vista, and isn't particularly processor‑taxing (Microsoft recommend a processor with at least a 1GHz clock speed). You can download a fully‑functional demo (at http://research.microsoft.com/songsmith) that runs for six hours before timing out, and to unlock it forever costs just $29.95 or 29 Euros. 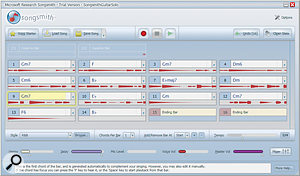 Microsoft's Songsmith may have the cheesiest commercial ever, but it could prove a useful tool to serious musicians in search of inspiration or exposure to new genres.

Windows Vista users should sail through the install process with no problems. However, if, like many other musicians, you're still running Windows XP with Service Pack 2 on a non‑Internet partition, you may run into the same thing I did: one of the most frustrating installations I've ever experienced. Let me describe what happened, so you're forewarned and can avoid the pitfalls.

Microsoft state on the Songsmith download page that Windows XP users require their Net Framework 3.0 package, but they don't mention that you can look in Control Panel's 'Add or Remove Programs' applet to see if you already have it installed. I discovered I only had 'Microsoft .NET Framework 2.0', so I went to the appropriate Microsoft web site page (www.microsoft.com/downloads/details.aspx?familyid=10cc340b‑f857‑4a14‑83f5‑25634c3bf043) and clicked on the large Download button to download version 3.0.

I then rebooted into my non‑Internet music partition and ran this file, only to find that it was merely a 'bootstrap' utility that wanted to go on‑line to download the real file. I rebooted, went back on‑line and discovered the real file further down on the same page (you click on the links named X86 Redist Package or X64 Redist Package, for 32‑bit or 64‑bit users respectively). I then rebooted, installed Net Framework 3.0 and ran the Songsmith install file, only for it to inform me that it required the Windows KB937106 Hotfix that "resolves a performance issue in Windows Presentation Foundation”. Aargh!

After I downloaded and installed this, Songsmith was finally able to complete its installation, except that I then got an error message saying I'd run out of hard drive space. The modest 98MB download file had spent several minutes expanding itself to nearly 1GB once all its sample data had been unzipped. Fair enough, but Microsoft made no mention of this hard drive requirement on the download page.

After this tale of installation irritation, Songsmith turned out to be rather more useful to serious musicians than it might at first appear to be. It's certainly a very attractive and fun product for non‑musicians, who can create instant songs just by singing in a tune. However, with a little lateral thinking it's also a great tool for the musician in search of new ideas.

Let's face it: sometimes we find ourselves humming a new tune or jotting down some lyrics, but coming up with chords and backing is generally a lot more work. Many musicians pick up a guitar or sit at a piano, but if you've only got your sequencer, that initial idea may have dissipated by the time you've loaded a suitable instrument and started playing along. So being able to simply play your melody or sing your tune into the PC and have Songsmith instantly come up with a backing track could really jump‑start some new ideas.

The sampled instruments it uses are from well‑known library developer Garritan (www.garritan.com), and there are 30 musical styles to choose from courtesy of Band‑in‑a‑Box specialists PG Music (www.pgmusic.com). These range from rock, bluegrass, blues and pop, via funk, jazz and disco, through to hip‑hop and techno. Add‑on style packs are already available, so Songsmith could also be handy if you're offered a project in an unfamiliar genre.

You just choose a style and desired tempo, then click on Record, whereupon the drums kick in for you to accompany. Once you've finished recording your melody, hit the playback button to hear what Songsmith has come up with. All the chord choices it has made for each bar are displayed, and can be changed, and you can also tweak your new song in various ways. The Happy slider gradually alters the chords from minor to major varieties, while increasing the Jazzy slider adds more sevenths to the chords, and you can change the style or alter its instrumentation.

Songs can be saved in Songsmith format, but (probably more useful for the musician), you can also export vocals, music, or both in WMA or WAV audio format, or the music alone in MIDI format, to import into your sequencer for further work.

Overall, I found Songsmith a surprisingly useful tool for generating new ideas that I wouldn't have come up with otherwise, but others have hit on the rather radical alternative of inputting a cappella versions of famous hits. Suddenly YouTube is awash with Songsmith renditions of tracks by AC/DC, The Beatles, Britney Spears, The Doobie Brothers, Nirvana, Oasis, The Police, Radiohead, and many more.

Sometimes the results are bizarre (a smooth jazz version of 'Sergeant Pepper', or a calypso‑inspired 'Roxanne'?), but others are just thought‑provoking. One of the most intriguing is a techno version of 'Wonderwall', but don't take my word for it — just enter "Classic hits by Microsoft Songsmith” into your favourite search engine and have a listen for yourself!

Defragmenting your Windows hard drive periodically will almost undoubtedly improve its performance: if you make sure each file is stored in one contiguous chunk, rather than scattered across multiple fragments, the read/write heads can grab each file as a single entity, rather than darting about picking up the pieces.

Many defragger utilities provide an auto mode that shuffles the pieces about behind the scenes whenever it considers your PC is not doing anything else, but this can be counter‑productive in a music PC: you don't want to risk any unexpected drive activity when recording or playing back audio. I recommend you switch auto mode off and simply perform a manual defrag every couple of months.

A routine like this can be helpful in other ways, since most defragger utilities will automatically run the Windows CHKDSK utility before they perform their magic, so if any problems exist, such as bad sectors that can no longer be read, or two or more files that both claim to be linked to the same sector, these can be resolved before the big shuffle. Obviously, it's always better to pick up possible problems and deal with them before you lose any data.

However, don't believe everything you read about defragging. The benefits for audio performance are more debatable, as I discussed back in SOS June 2005 (/sos/jun05/articles/pcmusician.htm). Also, some people seem to think you can perfectly well defrag your partitions by saving an image file and then restoring that image back to its original location. The supposition is that instead of laboriously shuffling the existing contents of the partition, an image file restore will erase them all, before overwriting them one file at a time from start to finish, ensuring that no defragmentation occurs.

Unfortunately, this supposition isn't borne out by any tests I've carried out, which instead show that image files are created and restored more quickly than defragging precisely because they perform a 'blind' copy of all sectors marked as used, rather than copying the individual files and their contents in sequence, so when you restore a partition, the file layout (along with any defragmentation) will remain almost identical.