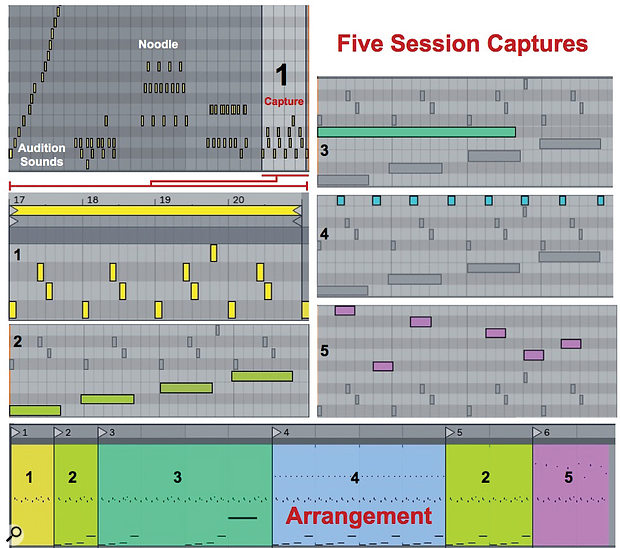 Screen 1: The Captured drum riff (1) is edited and overdubbed four times (2 to 5) with the resulting loops used to create the arrangement shown at the bottom. Only Session view Capture recording was used.

Live 10’s new MIDI Capture and Multi-Clip editing features are among my favourite improvements. They make working with MIDI clips much more convenient in both Session and Arrangement view. This month we’ll show you several ways to get the most out of them.

Live now archives all MIDI input to any track that is armed for recording or has its Monitoring mode set to ‘In’. Clicking the Transport’s new Capture button (the button with the four-corners logo in the Transport bar at the top of your Live set) inserts new MIDI clips holding the archived notes either in clip slots in a new Scene in Session view or at the current playback position on Arrangement view tracks. At first, I considered this a nice feature in case I forget to hit record or was noodling around and happened to play something useful. Only after experimenting for a while did I realise what a creative tool Capture is. Here is one way to build a MIDI project from scratch using only Capture.

Start in Session view by inserting an instrument on a MIDI track, arming the track for recording and then, with the transport stopped, playing your MIDI keyboard. When something takes your fancy, click the Capture button. Live will create a new Scene, insert a clip containing everything you’ve just played, loop the last bit, reset Live’s tempo to match and start Live playing. Most often you’ll get a four-bar loop, but you can easily adjust that to include anything you’ve played since the last capture. Live’s guess at the tempo will usually be between 80 and 160 bpm, so if your playing is well outside that range, you may find the note spacing doubled or halved. For example, if you play eighth notes at 48 bpm you may wind up with quarter notes at 96 bpm. The important thing is not the tempo Live chooses (you can easily change that), it is that the number of measures captured matches the number played, or put another way, that the notes are where they should be in each measure. To give Live a leg-up on that, it’s a good idea to end your playing on a downbeat. You can edit the notes and stretch or shrink their spacing, but the point is to avoid that as much as possible.

In the example in Screen 1 (above), I’ve used the Soul Drifter Drum Rack from Mad Zach’s 64‑Pad Lab free Live Pack (www.ableton.com/en/packs/64-pad-lab). After auditioning the pads, I played four-bar patterns until I got one I liked and then captured and trimmed the results to suit. The top-left of Screen 1 shows the whole capture ending with the four-bar loop followed by a downbeat on the fifth bar. The trimmed loop is shown below. 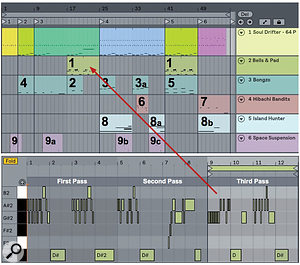 Screen 2: Nine instrumental parts are added to the percussion arrangement from Screen 1 using Arrangement view Capture. Letters denote edits to captured clips.Next you’ll want to overdub additional kit pieces, and Capture makes that easy as well. The process is the same for each new capture. Create a copy of the clip you want to overdub; duplicate, crop and edit the copy to taste; loop the copy; start it playing and then play along. Unlike Live’s Session Overdub feature, captured overdubs are not piled on top of one another. Each iteration of the loop creates a new overdub so that when you hit the Capture button you wind up with individual takes over copies of the original loop. Slice out the keepers and repeat the process to add more kit pieces.

Capture is also available in Arrangement view and capturing with the Arrangement Loop switch turned on produces multiple takes just as it does in Session view. In Screen 2, I’ve added five instrument tracks to the arrangement from Screen 1. Nine clips were captured using multi-take looping in Arrangement view.

You’ll notice that Arrangement view works a bit differently in Live 10. For starters, you can create new MIDI clips the size of the grid by simply double clicking in a track. When you hover over a clip and move the mouse up and down, the cursor changes from a hand (top half) to an arrow (bottom half). You use the arrow to select a segment of the clip and the hand to drag the selected segment, thereby also splitting it out from the rest of the clip. Holding Option+Shift/Alt+Shift changes the arrow to a pointing finger that you can use to slide the clip’s contents horizontally. You can also activate and deactivate the selected region across multiple tracks and, in the case of audio, reverse its content. While hovering, you can use mouse scrolling to zoom horizontally by holding Command/Control or vertically by holding Option/Alt. Finally, automation display and editing for Arrangement view tracks is now turned on and off globally from the View menu. See the box for some handy new key commands.

If you enable several tracks for MIDI input by either arming them or setting their Monitoring to ‘In,’ Capture will create clips on each of those tracks that receives MIDI input. This is really only useful if the track inputs are different (otherwise all the clips will be the same). Using different inputs lets you simultaneously capture the output from multiple MIDI devices: keyboards, button boxes, tablet apps and so on. You can also capture MIDI processing routed from one track to another within Live. 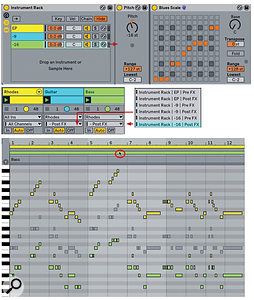 Screen 3: The Instrument Rack (top) on the piano track feeds transposed and scale-corrected notes to the bass and guitar tracks. The three clips are captured simultaneously and displayed using Multi-Clip editing.In the example shown in Screen 3, I’ve placed an Instrument Rack with three chains on one MIDI track (top) and used two additional MIDI tracks to capture the MIDI output of the Rack’s second and third chains (middle). Those two chains hold Pitch effects to transpose the MIDI input followed by Scale effects to scale-correct the transposed notes. I’ve then inserted instruments in the Rack’s first chain (electric piano) as well as on the two additional tracks (guitar and bass) to play the three parts.

The content of the three clips is shown using Live’s new MIDI Multi-Clip editor. With a single clip selected, Live’s MIDI note editor works as before, but when you add additional clips to the selection by Shift-clicking them, the editor sprouts colour-coded bars along the top that you can click to focus on one clip for editing — the remaining clips’ notes will be displayed in gray. Clicking on a gray note will switch the focus to its clip. Mousing over notes or the bars at the top will display the notes in colour without changing the focus. This is especially helpful for finding and adjusting notes in one part that are buried behind notes in another part. In Screen 3, the yellow electric piano clip is the focus of editing and the mouse hovers over the bass clip’s bar to display its notes in green. The guitar clip’s notes are displayed in gray.

Capture may not change your life; anything you can do with it and Multi-Clip editing you can also do with standard recording and single-clip editing. But suddenly that seems a bit old-school...

Live 10 comes with several new keyboard shortcuts to make your life easier. If you find that any of these don’t work, chances are you’ve assigned them to other tasks in Live’s Keyboard Mappings (Command+K/Control+K). Because assigned keyboard shortcuts are Set-specific, you may want to change any conflicting assignments in your default Live Set (Command+N/Control+N) and then save that as your new default Set using Live’s File/Folder preferences.